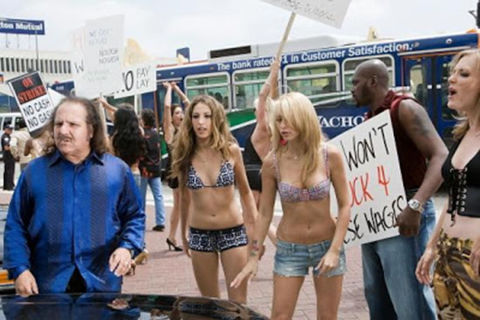 Often hailed as the hardest working man in showbiz (and certainly one of the most tirelessly self-promoting), Jeremy has been juggling adult and mainstream roles since the ’80s. If you don’t recognise him from the day job, you surely will from his appearances in Detroit Rock City, Ronin and Crank: High Voltage.

A contract player at Digital Playground, Steele, like Ashlynn Brooke, was among the cast for Piranha 3D. As Crystal, she notably danced with Kelly Brook and shared an underwater smooch with the Brit TV star.

The subject of The Bloodhound Gang’s 1999 song ‘The Ballad of Chasey Lain’, the Florida-born actress has made notable mainstream appearances in Orgazmo, Spike Lee’s He Got Game and a Tales from the Crypt movie.

Lords knocked out a handful of adult movie appearances before walking away from the industry after making 1987’s Traci, I Love You. Lords kept her stage name, and has been working consistently in Hollywood ever since. Notable roles include Blade, early Johnny Depp film Cry-Baby and Excision.

German actress Sibel has disowned her previous work as an adult star – not surprising given the abuse she received when it came to light – but she made a dozen or so films under the name “Dilara” in 2001 and 2002 before her movie breakthrough in Head-On. She went on to greater fame as Shae, Tyrion’s tragic, treacherous lover in Game of Thrones.