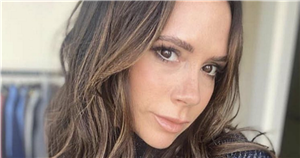 Victoria Beckham's clothing range is now being sold for up 70 per cent off online, following a series of heavy financial losses for the company.

The former Spice Girls star, 48 – who launched the business in 2008 – hasn't had the best of luck when it comes to her fashion empire in recent years.

Last week, a representative confirmed that the business has suffered huge losses, with debts of around £53.9million.

Now, it's been revealed that some of Victoria's designer items and accessories are being sold for far less than their original prices.

According to MailOnline, luxury online discount store The Outnet has slashed its prices on a number of her designer pieces.

While some of the items have been discounted at 30 per cent off, others have been slashed by 70 per cent.

Meanwhile, a checked cotton-flannel top has been heavily discounted from £650 to £260.

It comes after a spokesperson for the star confirmed the declining figures for her fashion brand. They told The Mirror: "Total revenues for the Victoria Beckham Holdings group fell 6% to £36.1m (2019 – £38.3m) due to the effects of the global pandemic'. "This group rapidly responded to the effects of the pandemic and controlled its cash and expenditure which led to a significant reduction in its operating losses by 57%, thanks to cost efficiencies across the business and the recalibration of its business model to make it sustainable for the longer term.

"Victoria Beckham Beauty continues to expand its portfolio with a number of successful product launches in this year with best in class in clean luxury beauty and skincare."

Victoria launched her beauty and make-up line in 2019, however in February 2021, it was revealed that the line had also suffered a loss of £4.7million.

A spokeswoman for the fashion designer added: "Whilst 2019 was a challenging year, the business halved its losses – a significant step in the road to profitability. The launch of the hugely successful beauty line in the same year helped drive overall revenues up 7% on 2018 and both businesses are focussed on profitable growth.

"The showcase of the recent AW21 fashion collection has been well-received by fashion critics and the beauty business has seen multiple sell-out products in recent months."

Despite some financial strain on her fashion range, the Beckhams' global empire has reportedly doubled its profits. Annual accounts filed with Companies House in London showed the pair made £11.6m in the year ending December 2020 despite the pandemic – compared to £4.5m in 2019.

Meanwhile, it comes after Victoria's eldest son Brooklyn cleared up rumours of an alleged feud involving his mum and new wife Nicola Peltz.