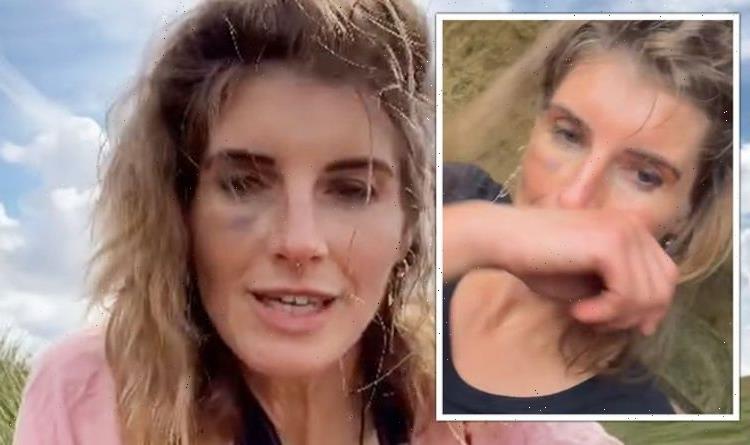 Amanda Owen, who is the star of Our Yorkshire Farm, recently suffered a brutal injury after being head-butted in the face by a sheep. The mum-of-nine has since sparked further concern after the shepherdess took to Twitter and reacted to a fan.

The 46-year-old suffered a black eye following the incident on her farm last week.

Taking to the micro-blogging site, the Channel 5 star addressed a fan who admitted her eye still looked “sore”.

It comes as the Yorkshire shepherdess continues to post videos with her family on social media with her eye injury on full display.

The person in question wrote: “That bruise looks sore.”

Taking the opportunity to reply, Amanda confessed that her eye was still very painful and feared she may have suffered a broken bone.

“Did wonder whether I’d fractured something, unbearable to touch.”

The Yorkshire Farm star added an emoji with a bandage wrapped around it’s head.

The mum-of-nine also uploaded a video while on her farm to Instagram which clearly showed the distinct bruising around her eye.

“Out in force on the gather. There’s some wily old yows out there but eventually we will catch up with all of them,” Amanda penned, in view of her 382,000 followers.

Fans swiftly inundated the comment section, as one wrote: “Oh your eye still looks painful. Hope you get better soon.”

Another quizzed: “What happened to your eye? I hope you are getting better quickly.”

While a third added: “Your eye looks very sore.”

Despite viewer’s concerns, Amanda appeared to be in good spirits as the Channel 5 star shared some big news.

Taking to social media, the shepherdess announced she will be releasing a new book in October.

She explained that her latest project was a “labour of love” but it was “incredibly difficult” to put together a book of stunning photographs.

Amanda penned: “A picture perfect place. Behind the lens it’s usually me or sometimes the children.

“A back catalogue of 100 k photographs has made it incredibly difficult to put together a book of photographs. It’s been a labour of love but finally.”

The self-titled book will showcase photographs of the famous Swaledale landscape and will also include Amanda’s homemade recipes.

Our Yorkshire Farm returns to Channel 5 later this year.