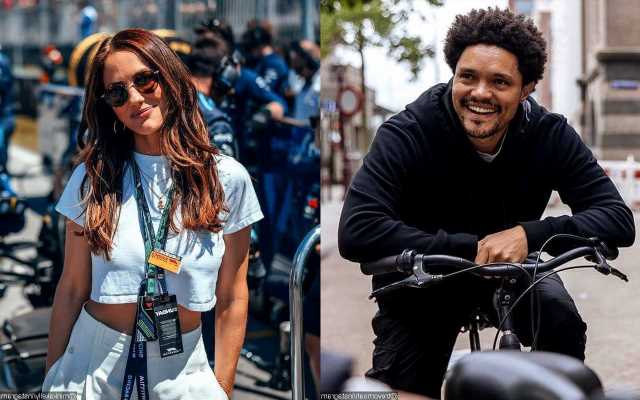 Two months after his breakup from the ‘Titans’ actress, ‘The Daily Show with Trevor Noah’ host enjoys catching up with his close friends as they dine together in a Mediterranian cuisine restaurant.

AceShowbiz –Trevor Noah is moving on with his life post-split from Minka Kelly. Two months after parting ways with his ex-girlfriend, “The Daily Show with Trevor Noah” host was caught on camera embracing a female friend as he hung out with close pals in The Hamptons.

In a photo taken on Friday, July 1, the 38-year-old TV host was captured embracing a blonde female friend from the side as they made their way on the street outside Mediterranian cuisine restaurant Il Buco Al Mare. He could be seen dressed casually in a black T-shirt with a pair of gray jeans whereas his female friend wore a body-fitting green dress while sporting sunglasses.

A source told Page Six that Noah was hanging out with his two male friends to catch up with them after splitting from Kelly two months prior in May. The blonde woman the South African comedian exchanged hugs with was one of his pals’ partners.

Noah and Kelly called it quits after spending nearly two years of dating. An insider shared with PEOPLE that the two have been “broken up for a while.” Another source supported the claims by telling outlet that Kelly “is very happy” post the split, and added, “She’d rather be single than waste her time with the wrong guy.”

The twosome began dating earlier in 2020. The “Titans” actress was believed to have moved into Noah’s $27.5 million mansion in January the following year. At the time, a source told PEOPLE that the pair “are still really happy and in love,” before adding that the TV personality has bought a home in Los Angeles for them to share in late December 2020.

The insider further informed the outlet, “They’re making plans for a future together, and it’s a very stable relationship.” They went on adding, “They’ve been spending time between coasts over the last year and had been looking for a place in L.A. as a couple.”