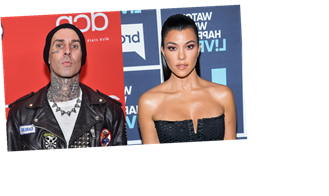 Travis Barker has nothing but praise for his new lady, Kourtney Kardashian. During an appearance on Thursday’s The Drew Barrymore Show, the Blink-182 drummer said his relationship with Kardashian “comes natural,” and the fact that they’re both parents just makes it work that much better.

“I would date girls that didn’t have kids and I find it kind of hard, because I think they have trouble understanding, well, ‘Why don’t you want to go to dinner every night with me?’ or ‘Why don’t you want to see me every night?’ and now, I’m spending time with a woman who’s, like, a great mom, who’s, like, a great friend and you don’t have to worry about any of those things, it just comes natural,” Barker told host Drew Barrymore.

The rock star later revealed what else he enjoys about being in a relationship.

“I also really like missing someone and cherishing the time that I spend with them, instead of, you know, every day being with them, especially in the beginning of the relationship. I think missing someone is so important,” he added.

When it comes to that love note Kardashian gave him, Barker said that’s just his style.

“I would prefer to go in a blaze of glory, like ball of flames,” he shared.

Despite things heating up between Kardashian and Barker, a source tells ET that Kardashian’s ex, Scott Disick, is not threatened by their relationship.

“Scott knows he always has a special place in Kourtney’s heart and that he can’t ever be replaced and will always be in the picture since he’s the father of their children,” the source told ET. “He isn’t threatened by Kourtney and Travis’ relationship at this point.”

As for how Kardashian feels about Disick’s fling with Amelia Hamlin, the source said she “doesn’t really let Scott and Amelia’s relationship bother her either.”