Streamlining the ceremony for the 21st century in a manner the Oscars and others would do well to take notes from, Paramount+ and its corporate broadcast network cousin weaved a two-hour livestreamed 74th Annual Tony Awards and, immediately following, the two-hour broadcast concert special The Tony Awards Present: Broadway’s Back!

Hosted by past Tony and Grammy winner Leslie Odom Jr, who was once in a little production called Hamilton, the two-pronged approach put the spotlight on the best of the 2019-2020 theater season just as Broadway itself is finally re-opening from the coronavirus pandemic.

Still, delayed over a year because of Covid-19 and delayed on the West Coast last night, the 74th Annual Tony Awards took a real hit on Sunday. Even with NFL overruns bleeding into 60 Minutes (7.12 M) and Big Brother (4.15 M), the performance rich The Tony Awards Present: Broadways’ Back ceremony snagged a mere 2.62 million viewers, according to Nielsen time zone adjusted data.

That is the worst result ever for Broadway’s celebration.

In fact, as far as full apples to sliced apples can be compared the 9 – 11 PM ET 74th Annual Tony Awards was down a hard 51% from the 73rd Annual Tony Awards, held on June 9, 2019. That Radio City held event hosted by James Cordon was the previous low for the ceremony, with 5.4 million tuning in.

Of course, no matter how many tricks were up the Tonys’ sleeves last night, and there were many, it just ain’t going to be your night when the Green Bay Packers take on the San Francisco 49ers on Sunday Night Football.

In the early numbers, the NFL flagship show over at NBC tackled the rest of the night’s primetime titles to easily win the evening’s top spot. The dramatic game, which saw the nationally followedPackers outplay the 49ers 30 to 28 in the final seconds, drew in a 3.8 rating in the 18-49 demo and 13.6 million viewers.

As is the cast with almost all live events like awards shows and sports, those SNF numbers will rise in the final numbers.

ABC saw the premieres of Celebrity Wheel of Fortune (0.4, 3.76M) and Supermarket Sweep (0.4, 2.51M), which were also down from their previous premieres. The Rookie’s Season 4 premiere (0.3, 2.80M), down one tenth in demo rating and 15% in viewership from Season 3’s January debut, closed off ABC’s quiet night. 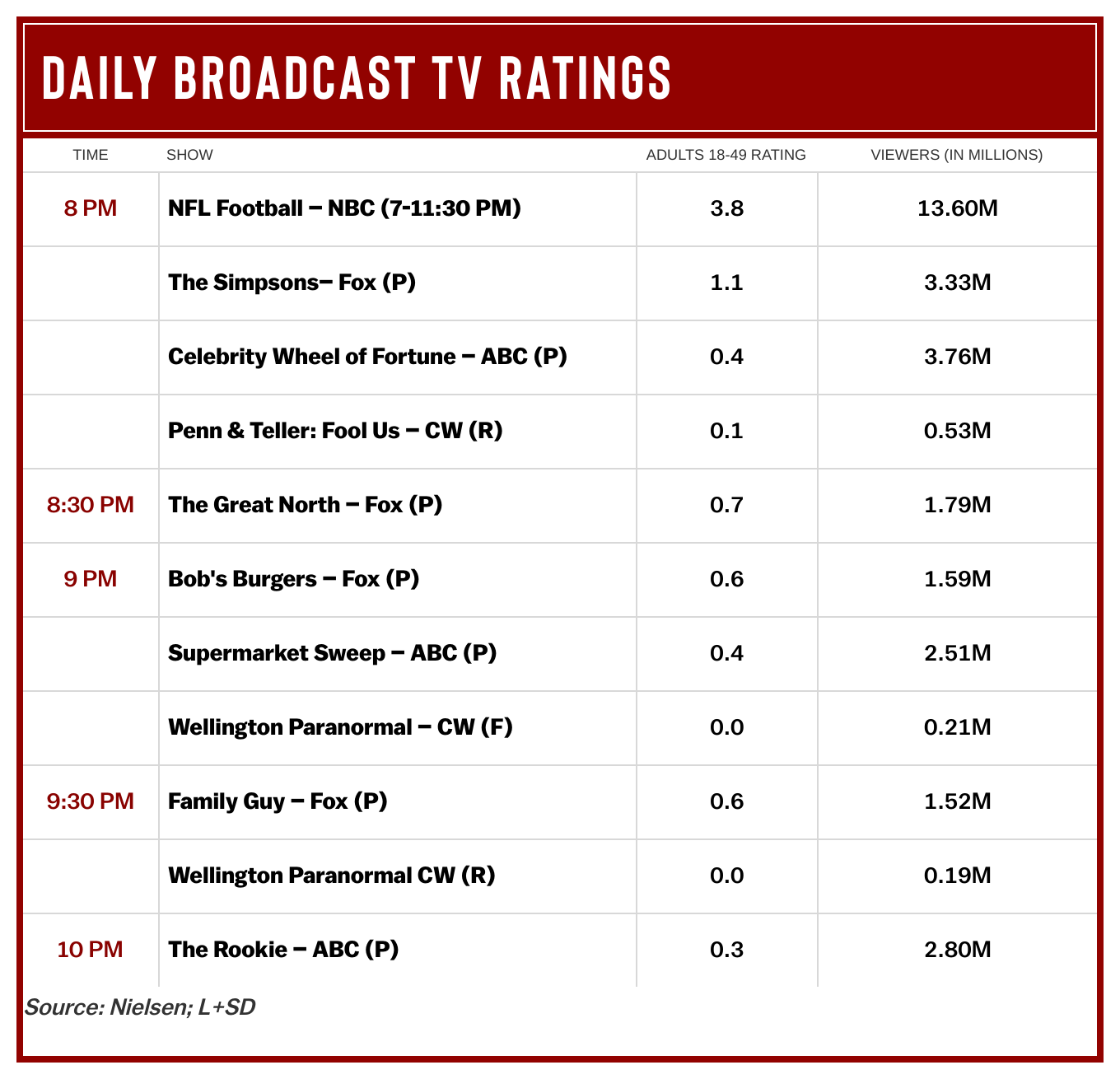