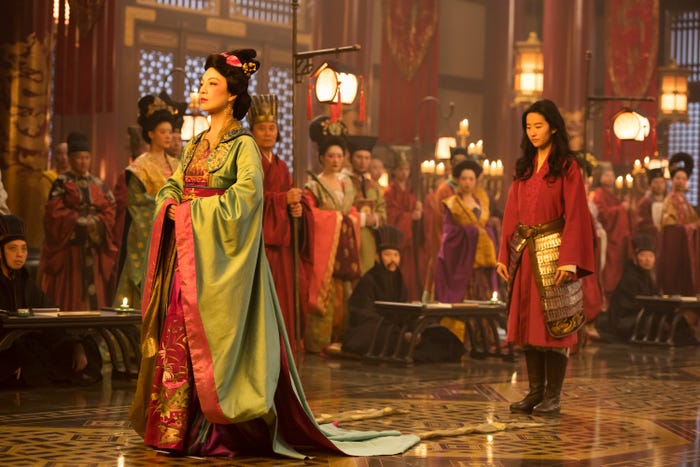 Ming-Na Wen was filming her final season of "Agents of S.H.I.E.L.D." on ABC when she flew to New Zealand to film a top-secret cameo for Disney's live-action "Mulan."

Wen, who voiced the original Mulan in the 1998 animated film, appears near the end of the movie, introducing the new Mulan (Liu Yifei) to the Emperor as an esteemed guest.

It's not just Wen who makes a secret cameo, though. You may have overlooked a blink-and-you'll-miss-it appearance by Wen's daughter, Michaela Zee.

"[Producer] Jason [Reed] was so sweet. He [was] like, 'Oh, your daughter has to be in it, too.' Passing on the baton all around," Wen told Insider.

With the release of the live-action film on 4k and Blu-ray and the rerelease of the animated movie on 4k, Insider spoke with Wen about the logistics of coordinating her cameo in the film, which was originally supposed to be much different, working with her daughter on screen, how she hopes Disney will give the live-action film a limited release in theaters one day and the animated film's legacy 20 years later

I've been hoping to speak with you since I first saw the movie. I'm always going to remember this film because I happened to be at the premiere in March. It was the last movie I saw in theaters before we went into lockdown in California.

And how lucky were we all? I didn't hear anything about anyone getting it. That was at the cusp of COVID getting worse. We're all very fortunate.

Was that one of the last real normal things you did?

Completely. I was worried about [COVID] very early on when I was first hearing about it in January. My husband went out and bought some products and things, but, now I can always say, "See? I was right." I wish I was wrong. I truly did.

But, yeah, that was the last time I went to a movie theater, [the] last time doing a big Hollywood event. Let's hope things change soon.

The fans inspired Wen to inquire about a cameo in the live-action movie. She filmed it in secret during the final season of 'Agents of S.H.I.E.L.D.'

With the live-action film, do you remember where you were and what your reaction was when you first found out that Disney was going to be adapting this? Did you know before Disney was announcing it — did they give you a courtesy call?

Uh, no. [Laughter] No. I found out about it, I'm sure, with everyone else. My managers probably told me about it. I was like, "Oh, that's nice." Then, I thought about it some more.

The only reason why I started thinking more about it was because so many of the fans, when they heard about it, they were like, "Are you going to be in it? You have to be in it. They better put you in it. You could still play Mulan." I'm like, "Yeah, right. OK." Maybe, "Mulan: The Later Years." [Laughter] It was really the fans that kind of sparked the idea in me to inquire — Would they be interested in maybe having me do a cameo or maybe a scene, a character, just for the fans? I'm always, always, always about the fans.

I love them dearly and I'm a huge fan myself and a total geek. So I know what would get me excited with all the different genres that I love. That, to me, would've been a really lovely Easter egg for the fans. My manager and my agent, they put in a call and I met with [producer] Jason Reed, who's lovely, and we had a wonderful conversation. I said, "If it works out, that's great. If it doesn't seem to make sense, totally understand."

They made it work out… under very top-top-secret situations because I was shooting "Agents of S.H.I.E.L.D." at the time. With my producers, we figured out a time period that I was able to fly all the way up to New Zealand, shoot it, and then fly back, and nobody knew.

That's amazing. One of my colleagues spoke with Jason Reed about how your cameo came about. He had mentioned how you were filming the final season and I believe you were originally going to have a different role as a mother-in-law at one point.

And then this cameo came about instead. I kind of love that they came up with this one because it was this passing of the torch moment from one Mulan to another.

Yeah. The other one was just sort of like, "Oh, it would have been fun to see the original Mulan participating in the live-action." But there [were] major scheduling problems. They needed me out there for a whole month because of weather, because of location, and my producers at "Agents of S.H.I.E.L.D." just threw up their hands. They're like, "Ming, we can't lose you for a whole month." I totally understood. So I was like, "Oh, it's too bad. It's not going to work out."

Then Jason and [director] Niki [Caro] just came up with this great idea, which I think is so much better, so appropriate — the passing of the torch and being in that whole final scene with everyone in that heroic moment. It was perfection. I was so grateful when we were at the premiere and people were cheering at the end. I was a little nervous, I have to be honest. I was in so much makeup and I was like, "Oh, nobody's going to recognize me."

I remember there were people who gasped in the theater when they noticed you. It's sad that because of the pandemic, most people didn't get to have that collective experience.

They have to share it on social media instead. Fans are writing [that] they cried, they cheered. So that was lovely.

People caught your cameo in the film. I don't think everyone caught your daughter, Michaela, though. How did that come about?

Jason. When we met, Michaela was there, too. We were sort of toying with the idea of — "Oh, how great would it be if Michaela got to play young Mulan?" But she was way too young. He got to meet her, too. And I think he just loved her. It was a gift for Jason to have it kind of be cemented in film, this really special moment. [She] was very proud of her mom being Mulan.

I have to imagine she grew up watching "Mulan" as well. What did it mean for you to be able to share this legacy and this moment with your daughter?

It was fantastic. For her senior picture, they get to goof around with their ID and she surprised me. She was like, "Mom, can you make me up as Mulan when she is going to the matchmaker? I want that to be my ID." — her high school ID card. I'm like, "Seriously?" I was like, "Aw. That's so sweet." That was a very special moment for us.

New Zealand is beautiful. We just had the best time together. Seeing that throne room and meeting Yifei and the director, Niki, and all the boys, it was a real treat — very, very, very precious and special.

Wen was a little bummed the live-action movie wasn't pushed to next year, but she's happy people are experiencing it safely

We know that the film was pushed back a few times and eventually it went to Disney Plus. Do you remember what your reaction was to the film continuously getting pushed back and then finally being sent to streaming? Were you bummed a little bit?

Yeah, I was. I was hoping that they would push it to next year. Just seeing how things were happening with the pandemic, it just didn't seem feasible that we were opening up anytime soon. I don't understand the intricacies of what they have to figure out and deal with. That's way above my pay grade. Whatever decisions they made, they made through their calculations.

For me, I always look at it artistically and emotionally. I don't think about it on a financial level. For me, seeing it on a big screen and sharing it with all the other mutual Mulan fans, who've grown up with this story for the past 20 years, those are the moments that got missed.

It's unfortunate, but at the same time, I don't think it would have done well with the pandemic, being released on the [big] screen. I certainly wouldn't want a film that is so near and dear to me — the animation and the whole Mulan legacy — [to be] a cause for any further hurt in anyone's health. At least people got to see it and that's the most important thing.

With all the DVDs and the 4K, it deserves to be seen in the beautiful cinematography that Niki Caro did for that film and all the acting and the costumes and everything. I just hope more and more people become introduced to the live-action version.

I agree. Do you think there's a chance we could see it in theaters one day? Is that something that you would like to see?

Wen says it's a 'constant struggle' to be Asian, a woman, and now older in Hollywood. She tells fans to keep knocking down barriers.

Is there, is there a time you've ever felt unfairly treated in Hollywood or is there something that you want to see more of in TV or movies?

As an Asian woman, and now an Asian woman of a certain age, I used to just have two whammies against me — being ethnic and being a woman. Now I have a third, which is ageism. It's a constant struggle. I never thought of them as minuses, but so many people talk about it that way. I never saw it that way. I just saw myself as someone wanting something and then going after it. That's what I always tell the young kids and anyone who is pursuing any art form — you can't make it an excuse. You just have to keep forging ahead and knocking down the barriers and not let people devalue you.

Hold yourself up to the level that you want and feel you deserve. There's no sense of arrogance about it. It's just coming from a sense of strength and being able to identify yourself as someone of value and someone able to offer something and never use being short, tall, fat, skinny, young, old as an excuse not to have something happen. When you start there, that's when things change. You have to believe it.

It's like "Mulan." She had to discover her potential and her abilities and I think that's why so many people year after year, 20 years later, still love her so much because they see themselves in her. There is a heroine in all of us. There is that potential in all of us to do great things. It's just a matter of really sticking to your convictions and believing in yourself and having the heart and the compassion to do it.

The live-action "Mulan" is available now on Blu-ray, 4K, and digital. It will stream on Disney Plus on December 4 for all subscribers. Disney's 4K rerelease of the animated "Mulan" is also now available.

You can follow along with our "Mulan" coverage here.