If we are to believe the breathless breakfast television hosts, we are thoroughly in the grip of royal fever thanks to the ever-smiling, though slightly robotic and thoroughly stage-managed, appearances of the Duke and Duchess of Sussex. 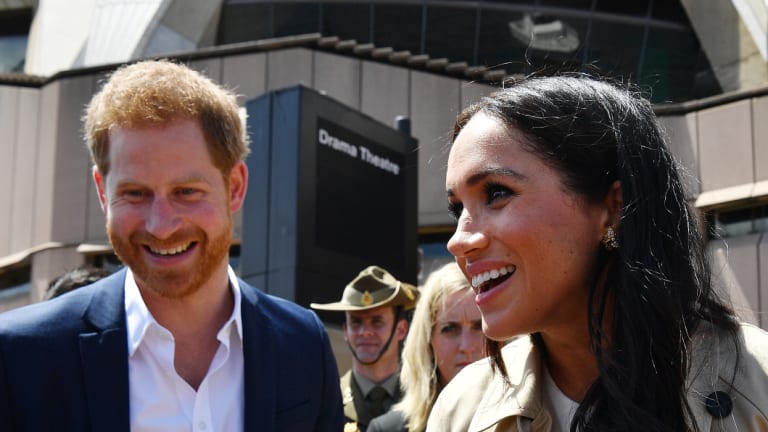 Prince Harry and his wife Meghan meet the people of Sydney at the Opera House on Tuesday. Credit:AAP

But behind those big toothy grins and stuffed kangaroos, further down the regal ladder, life is not quite so rosy for a growing brood of "rent-a-royals" who must jostle for power and position in a drama that would rival anything depicted on Game of Thrones.

But scoring a ticket on the royal gravy train can lead to riches beyond compare. 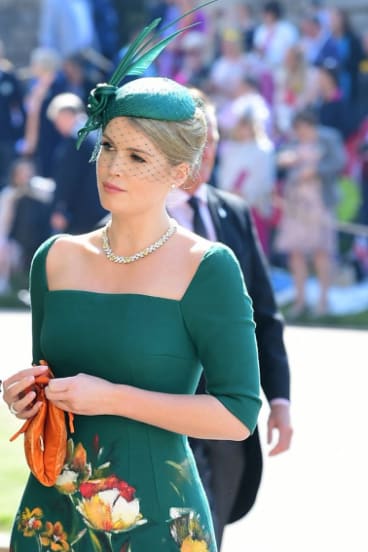 PS remembers well her last visit here a couple of years ago, the celebrity guest at one of the swanky marquees of the 2015 Melbourne Cup, which she was paid around $30,000 to appear at, complete with first-class tickets and a lovely all-expenses paid holiday.

I was among those granted a few minutes for a quick interview with the pretty blonde, then an unknown 24-year-old who was clearly being feted because of her blue-blood connections, given she is the daughter of Diana's brother, Charles Spencer, the 9th Earl of Spencer.

Patiently waiting at the end of a queue trying to think of something remotely interesting to ask the doe-eyed beauty, who was busy gushing about her hat, shoes and frock to the correspondents from Woman's Day, Australian Women's Weekly and New Idea, it was not looking good as I inched closer. 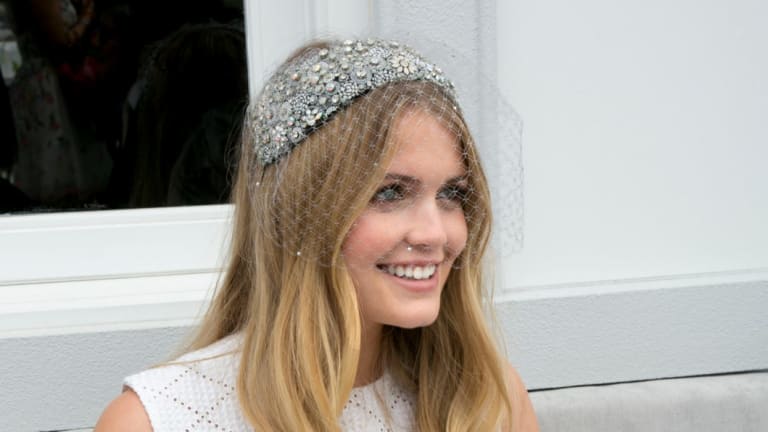 "So Lady Kitty, do you ever feel pressure to meet certain expectations given the enormous impact your late aunt made on the world?" I asked, smiling broadly, hopeful she might see the question as an opportunity to flex her intellectual capacity beyond her choice of headwear. After all, she had also studied politics and psychology at university.

Those big eyes, adorned with spectacularly long eyelashes, began to flicker uncontrollably, and sweet Lady Kitty was unable to respond with a single word before one of the two pursed-lipped minders clutching clipboards quickly intervened, declaring: "Lady Kitty will not be responding to any personal questions about her family."

Given the edict, I declined to ask any further questions, explaining her choice of footwear was of little interest to my readers.

Fast forward to 2018 and Lady Kitty is a bona fide global celebrity in her own right, having scored lucrative modelling deals including one with Italian luxury jeweller Bulgari, which regularly adorns her in millions of dollars worth of diamonds.

She goes to all the hottest parties and appears on the cover of glamorous fashion magazines, inevitably billed as Princess Diana's niece. But she still rarely speaks about her Aunty Di, apart from saying her memories are only good ones.

Of course in Sydney we have our own regal connection in Jane Ferguson, the sister of Sarah, the Duchess of York, and aunt of Princess Eugenie. 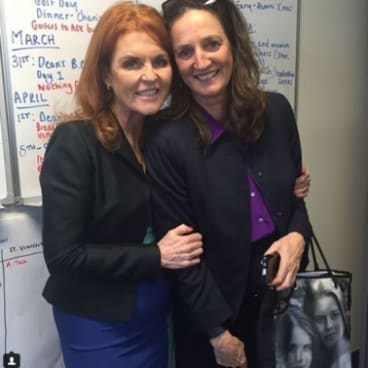 For years I have endearingly – and a little cheekily – referred to Jane as "Fergie Downunder". She has graciously taken it on the chin. Last weekend Jane, along with her three adult children, two grand children, boyfriend and stepdaughter, were all at Windsor for the "other" royal wedding.

While not giving too much detail away, she was however keen to inform me of all the various fashion labels her brood would be wearing, no doubt keen to make the most of the media exposure.

Over the years Jane has parlayed her royal connections into everything from paid magazine features to a gig on the now defunct reality TV show Australian Princess, on which she helped transform a group of, ahem, rough diamonds, and turn them into sparkling beauties worthy of a prince. She has also helped raise millions for local charities.

For years her sister Sarah has had to make ends meet by signing multi-million-dollar deals to spruik everything from tea bags to Weight Watchers. 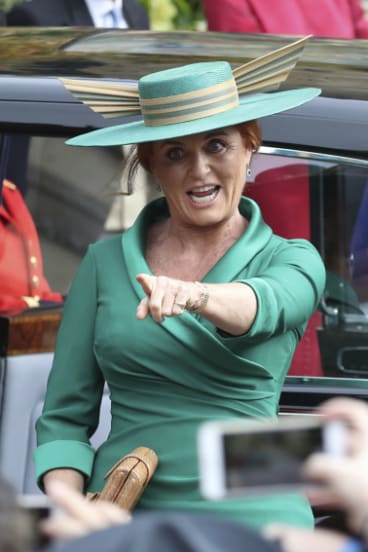 Sarah Ferguson arrives at the wedding of Princess Eugenie of York and Jack Brooksbank at Windsor.Credit:Steve Parsons/AP

According to the British tabloids, the Duchess of York is mightily peeved that her daugther's wedding has been somewhat overshadowed by the announcement that Prince Harry and Meghan are expecting their first baby, revealed on Monday to the world, but apparently disclosed to the royal family during Eugenie's wedding celebrations.

But given the very nature of what the royal family is, Fergie knows only too well that there can only ever be one true queen.