As an actor, Michiel Huisman has had opportunities to take on a variety of roles, from the fantasy drama of Game of Thrones to the romantic reverie of The Age of Adeline and the horror of The Haunting of Hill House. But in playing Alex Sokolov in The Flight Attendant — the HBO Max series optioned, exec produced by and starring Kaley Cuoco as flight attendant Cassie — the Dutch actor gets to flex a new comedic muscle as the mystery man in a one-night stand gone horribly wrong. Here, he discusses becoming the good-guy hallucination that haunts Cassie.

DEADLINE: You’re almost like you’re the Greek chorus in The Flight Attendant — you’re challenging Kaley’s character and filling in the blanks for the audience. Was that what attracted you to the part? 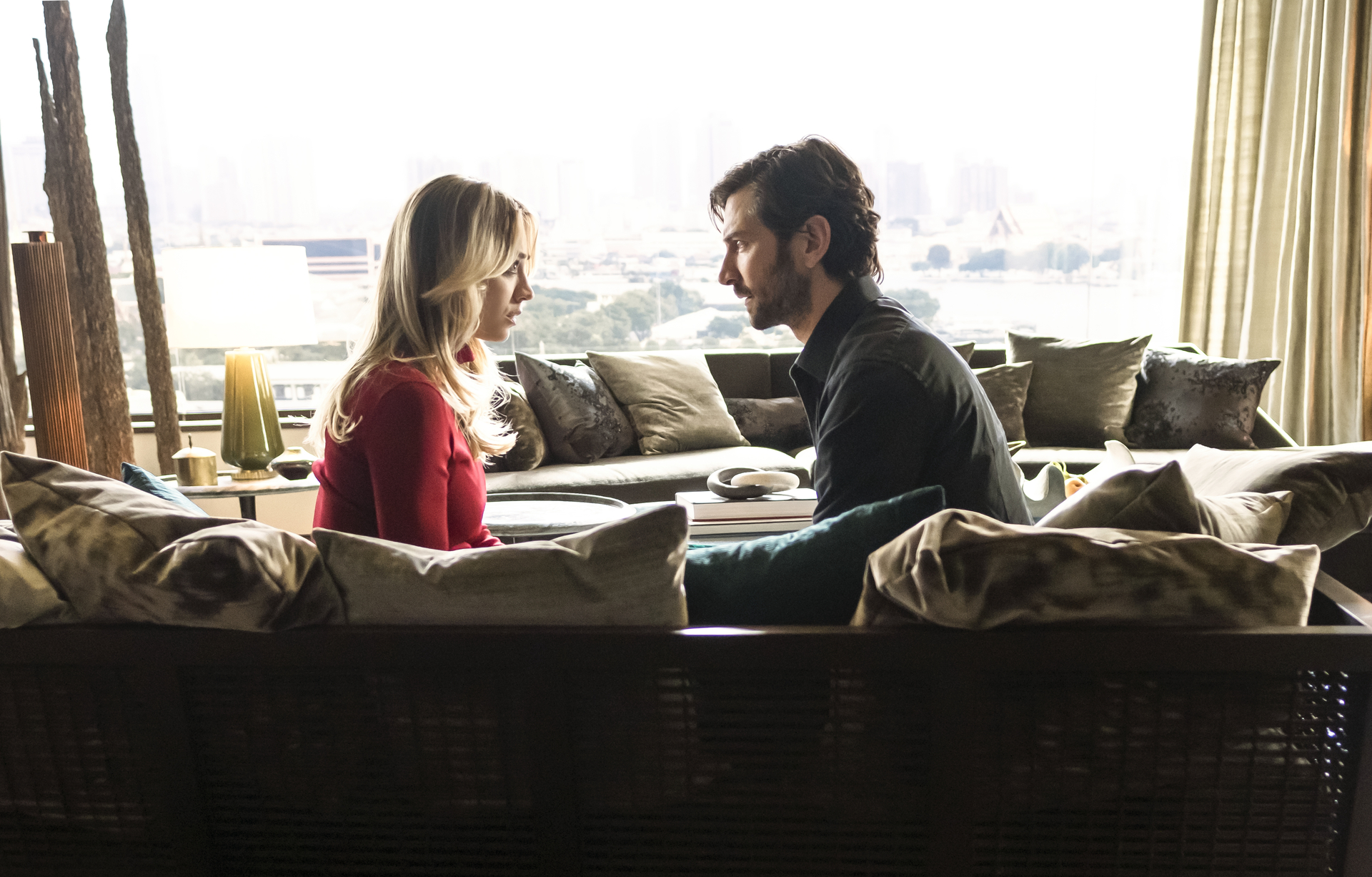 MICHIEL HUISMAN: There were many things that attracted me to it. First of all, I had never done comedy before, so that was something that I’ve been wanting to dip my toes in for a long time because I really enjoy watching comedy. And I also think that as an actor, it’s just fun to also sometimes work on some lighter stuff, you know? And so, this seemed to be like a great opportunity to do that and to do it opposite someone like Kaley who’s really comfortable in the genre. But then I remember reading the first episode and thinking, “Wait, how am I… What’s going to happen here? How in God’s name am I going to play a character that dies halfway into the first episode?” Such a bizarre thing, and the surreal-ness of him being back after he dies. But really, it’s not like he’s resurrected from the dead. It’s really in her head, and I really liked that. And I think that when you’re saying it’s like the Greek chorus, it is bizarrely enough a little bit like Cassie is having a dialogue with herself, but that being me, you know? So, I thought that that was crazy cool and would be a challenge for me to try and tackle.

DEADLINE: It’s also not just any comedy, it’s dark comedy and there’s the need to get that tone just right.

HUISMAN: Yes, absolutely. And that was, I think one of the biggest challenges in making the show. I think that’s such a big thing, that I only play a small part in. That is really about writing, directing — you know? And I’m glad we were able to pull it off. 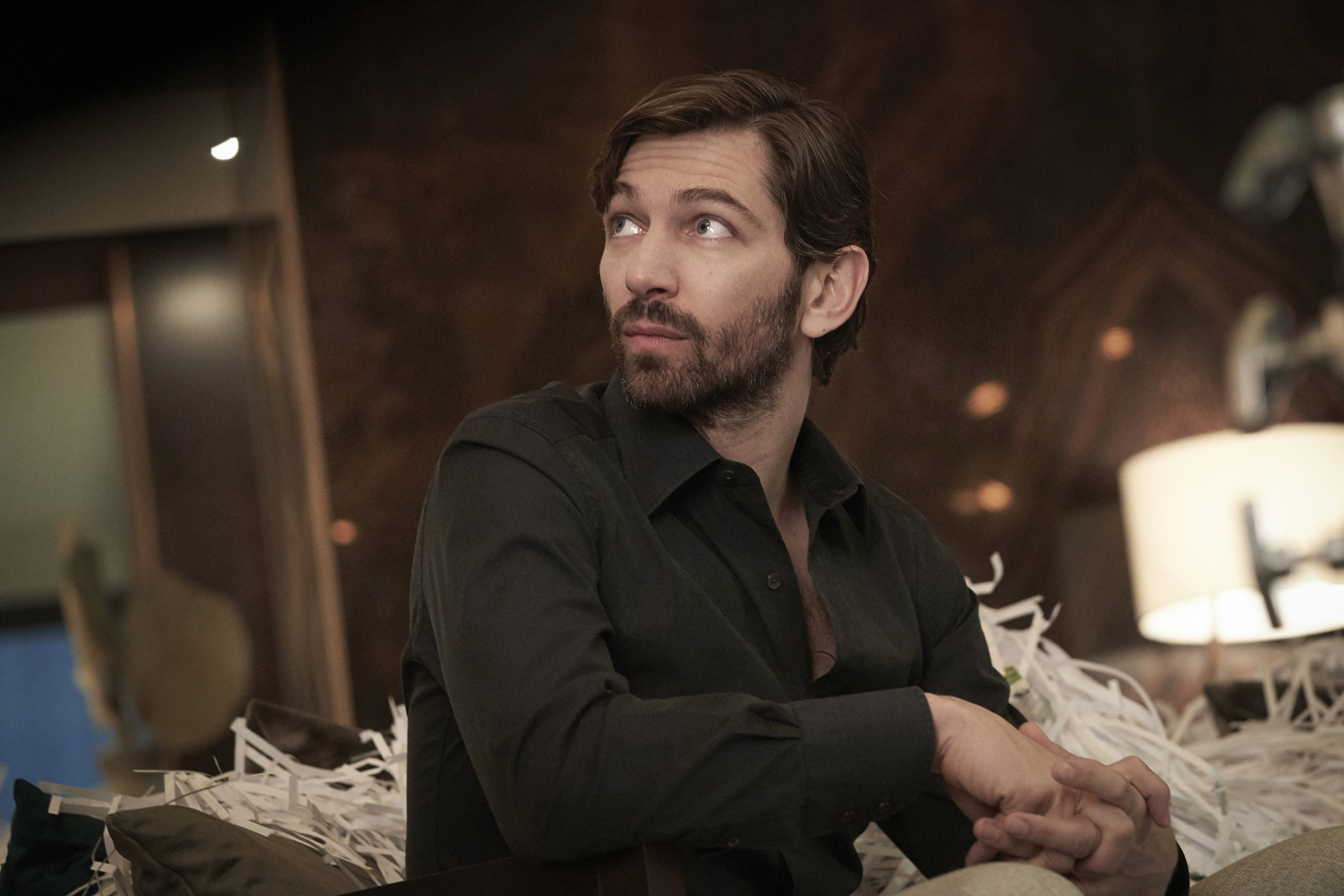 DEADLINE: You’ve been wanting to do comedy for a while — what did you learn from this experience?

HUISMAN: I think that I learned a lot about being more sensitive to rhythm. Maybe that’s also something that comes with the territory of doing something that is a bit more in the comedic world. You know, like I just had to open up my senses a bit more for the rhythm of a scene and the rhythm of a line. I felt, especially in the beginning, Kaley really understood that and knew how to drive a scene. And I was like hobbling along, and hopefully it got a bit better at a certain point. Because yeah, characters probably speak their mind a bit more in the show. In The Flight Attendant, they’re thinking out loud, and on many things that I’ve worked on before characters internalized stuff more. And so, that required a bit of adjusting, I think, for my part.

DEADLINE: Viewers really get caught up in trying to figure out what happened with Cassie that night — how are we going to see that now play out in the second season now that the mystery has been solved?

HUISMAN: I can’t really speak to that, but I also think that I represent part of Cassie’s trauma. And over the course of this first season she needs to, or tries to, come to terms with that trauma. And I think Season 2 will be a bit of a departure from that, and it will be a new adventure, without wanting to spoil anything.

DEADLINE: That’s also what makes it such a standout series — it’s more than a whodunnit; it’s the bigger story of Cassie’s own life.

HUISMAN: Yes. And that’s a real big story and a pretty heavy story. So that goes back to what you referred to earlier, the tone of the show, that’s also what I thought was going to be a challenge to still keep it light and funny, but deal with such heavy subjects, you know? And my killing is by far not the heaviest.

DEADLINE: So, will you, or the hallucination of you, be back for the second season?

HUISMAN: They want me to be incredibly vague about that. I respect that these writers want to keep it nice and vague and then surprise their audience. 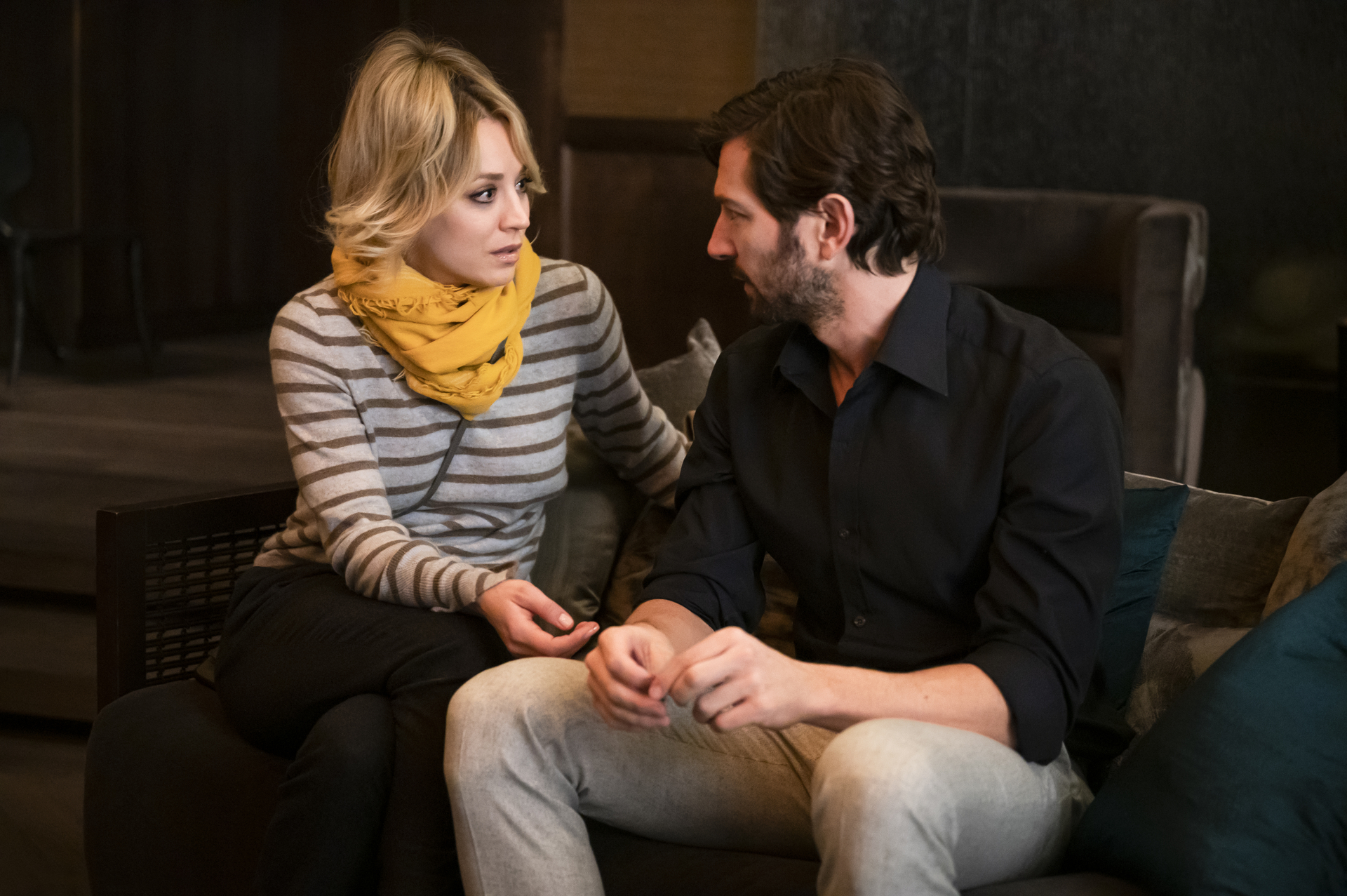 DEADLINE: Production was interrupted by the pandemic, so what was it like to return to set to finish shooting?

HUISMAN: When we came back to finish the final three episodes, it must’ve been in around September of last year, and the only time that we could pretend like things were relatively normal was when the cameras were rolling, because then Kaley and I could take off our face mask and be within six feet. So, it was strange. You would forget about all of it. And then after the camera stopped rolling, you would look over and then you realize, “Oh, we’re still in a pandemic. Everyone is wearing insane amounts of PPE.” It was a bit surreal. This is so funny. So, Kaley, she’s a tennis player, she used to play tennis as a kid and she’s very good in sports and stuff and a fanatic, she wants to win. And so am I. And I love ping-pong. So, I talked about ping-pong to her a couple of times, and she was like, “I’m going to beat you. Let’s play. I’ll beat you.” And I’m like, “Dude, I take lessons. You know, I go to a place where I get classes and stuff. You’re not going to win.” So for her birthday, I brought in my teacher. He came to our studio in Brooklyn and gave her a lesson. And we had arranged for a ping-pong table and so we would always, between scenes, just run our lines while playing. And then one day, of course, you know, lo and behold, she says, “Let’s play a game.” I’m like, “Really? Come on. We should just keep it nice and friendly.” And I really also thought, “You know, I’m going to beat her, like, ‘You’re good, but you’re not ready.’” Before I know it, it’s 8-5 to her. I start to focus a bit more, and I tense up and make the rookie mistake, so she wins. And she puts a paddle down and she’s like: “Done. I’m done. We’re not playing again.” And I keep bugging her to play again. Then the pandemic hit. After the pandemic, we weren’t allowed to use the ping-pong table anymore. You know what she gave me as a wrap gift? She had bought me a really nice Tiffany whiskey decanter. Beautiful. And she had it engraved. It says, “Remember when I beat you at ping-pong? Love, Kaley.”

DEADLINE: Oh man, you’re never going to live that down.

HUISMAN: Yeah. I have to live with that forever. She also posted it on her social media that she won. So, I get texts from friends like, “What happened?” She’ll never want to play with me again. 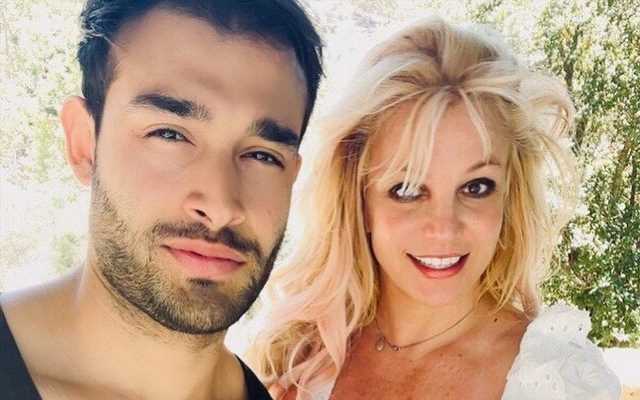 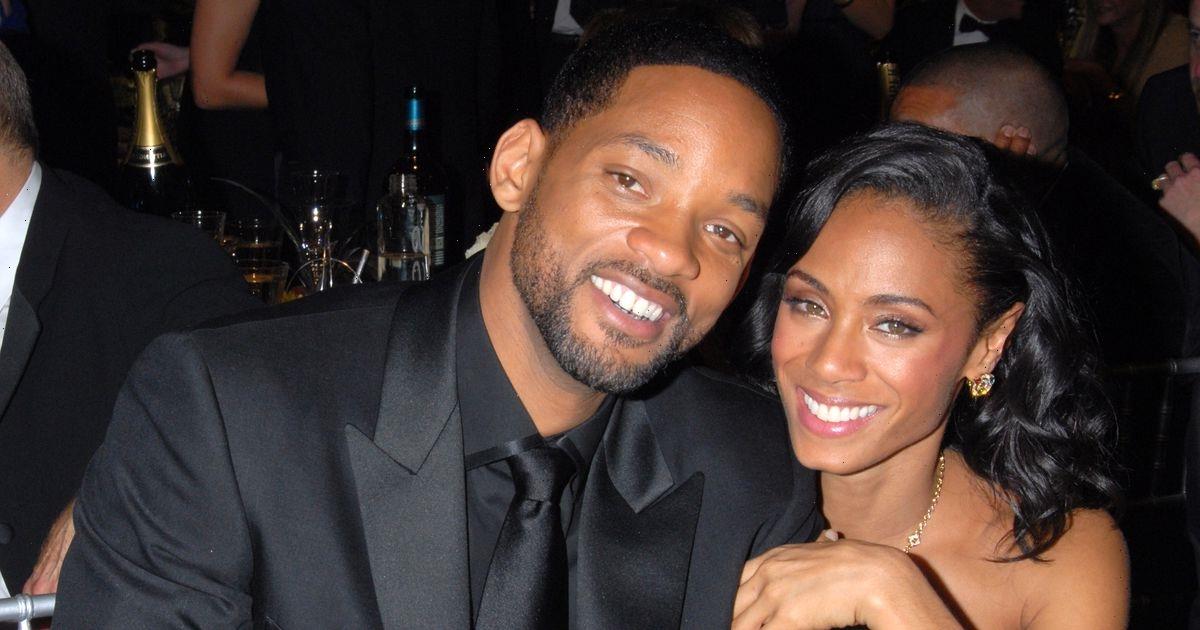