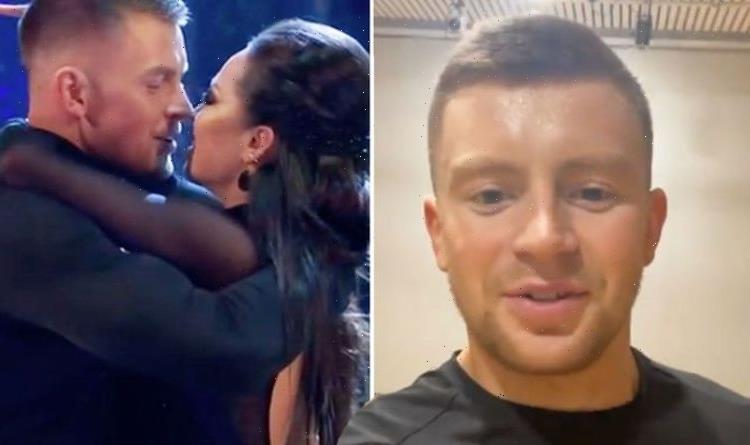 Adam Peaty, 26, gave fans an insight into his rehearsals with Strictly Come Dancing professional Katya Jones, 32, on Instagram today as they prepare for their Samba routine this weekend. In view of his 578,000 followers, the swimmer laughed as he returned to the studio to see his dance partner dancing in an inflatable T-Rex costume.

Puzzled, he asked: “Where did you get that from?”

As she excitedly continued to move in the costume, she said: “This is how you dance sometimes but that’s OK because it’s quick steps.”

Adam went on to say he was “very tired” after recording his audiobook and returning to training today.

He then turned the camera onto Katya who ran up and down the studio saying, “Don’t film me”.

In his latest post, the athlete showed fans a piece of advice he had taken on board after today’s “struggle”.

He wrote: “Although I had a struggle today, my fortune cookie sent me some advice.”

Katya held up a quote on paper to the camera which read: “If you really want to do something, you’ll find a way.

Last weekend, the dancing duo hit the headlines after viewers claimed he was about to kiss Katya after their intense Argentine Tango.

His girlfriend Eirianedd Munroe also reacted to the moment on her TikTok page.

Mocking the situation, the 23-year-old pretended to cry as she wrote that her boyfriend “almost kissed” his dance partner.

The caption read: “Watching your boyfriend almost kiss another woman on live TV.”

She then whipped her head back as she pretended to scream while the words, “Finding out 10 million people also watched it live”, were written across the video.

The Strictly star hit back at the claims in a defiant post on Sunday.

Alongside a picture of the pair on the dance floor, he wrote: “We go again, thank you so much for all your support! Such a relief!

“To everyone who sees what they want to see, your comments have real life consequences.

“I will not be lowered or overcome by your gossip. Protect your energy.”

In an interview on Zoe Ball’s BBC Radio 2 Breakfast Show, the pair said they were “acting” in the moment.

He said: “It’s being believable, isn’t it?

“You don’t want to do a dance like that and not do it justice because you haven’t switched on right at the end.

“So it’s being believable, and that’s what I think some people get carried away with.

Strictly Come Dancing continues Saturday at 7.05pm on BBC One.