The good news about Stranger Things season 4 is that it has most definitely been worth the three year wait. Not only is the much-anticipated series full of great moments with our favorite characters, flawless 80s vibes (hello, Kate Bush) and extra-long episodes, but it’s also one of the scariest seasons yet, thanks to Vecna, the terrifying creature? Monster? Skinless person?? Well, while we were busy hiding behind our sofa cushions, some far more observant fans spotted a load of clues that Vecna actually isn’t all that new, and may have been around since season one. Well, well.

Season 4 didn’t waste any time introducing us to Vecna, via nervous cheerleader Chrissy Cunningham who began experiencing hallucinations almost straight off the bat. Both Chrissy and later characters who come across the latest Upside Down escapee see an eerie grandfather clock announcing Vecna’s presence right before things… kick off. 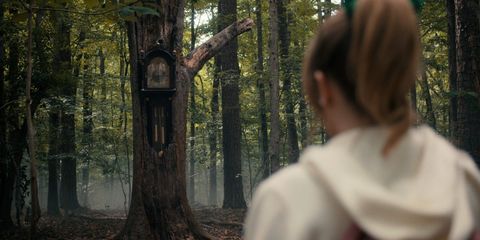 Well, it’s this foreboding grandfather clock that has got fans convinced Vecna has been around since day one, and that he may be the ultimate evil presence that has been haunting Hawkins all this time.

As one fan pointed out on TikTok, all the way back in episode one, series one when Will is biking home from playing D&D at Mike’s house and first encounters a Demogorgon’s shadow, we hear the sound of an old clock chiming.

The noise itself is eerily similar to what season four characters experience when they first come across Vecna. Obviously leading fans to believe this may all have been building to this moment.

“Literally Will’s disappearance has Vecna’s finger prints all over it,” one viewer commented, while another wrote, “IT’S BEEN THERE ALL ALONG WHAT.”

If that wasn’t enough, another fan found a second moment from season three where we hear the old clock chiming after Billy has been dragged into the Upside Down.

So, what does this mean? Is Vecna the big bad thing that has been running riot throughout Hawkins this whole time? Or is it just another red herring?

Isn’t it great to be back?