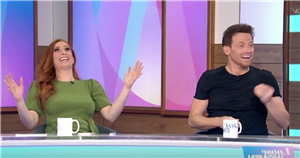 The soon to be husband and wife appeared on the popular ITV talk show alongside Eamonn Holmes and Ruth Langsford, both 61, when the blunder occurred.

Not thinking he would get the honest answer to his question, Eamonn casually quizzed Joe, 39, on whether he knew the date of his nuptials with Stacey, 31.

To Eamonn's surprise, Joe immediately replied: "I do know when it is. It's the last Sunday in July."

The slip-up left Stacey fuming, as she enraged: "Oh my God! Why did I bring you here?"

Meanwhile, Ruth and Eamonn, who cosied up for a smitten selfie before the show, hilariously looked at their diary and confirmed they were free to attend the wedding.

Someone else humoured: "Stacey are we allowed to say? LOL".

A third added: "There's going to be a row in the car going home now Joe has let slip when they're getting married. #LooseWomen."

Later in the episode, Stacey and Joe admitted that their connection was so strong from the beginning that they still would have met, even if they hadn't appeared on I'm A Celebrity… Get Me Out Of Here! together in 2010.

Stacey explained that their "paths had crossed so many times before they spent time together".

Joe added that their friends "thought they were going out" way before they began dating because they were so comfortable with each other.

Ruth and Eamonn, who have been married since 2010, went on to offer Stacey and Joe advice for their big day.

"Stand back during the day and take a look at everyone who's at your wedding," Eamonn began.

"You'll never have all those people in one place. Whether your marriage works out or not, that day, it's all about feeling the love. Be there and experience it."