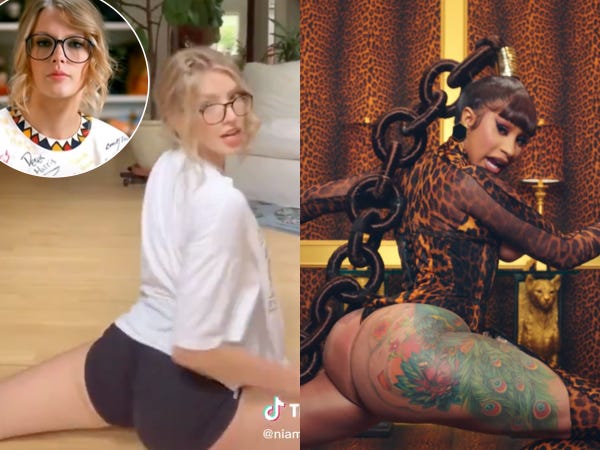 TikTok user Niamh Adkins combined Taylor Swift's "You Belong With Me" and Cardi B's "WAP," and the rapper herself took notice.

Adkins posted a clip of her parodying Swift's 2009 video for "You Belong With Me" to TikTok on Saturday.

But at the end of the first verse, she unexpectedly begins dancing to "WAP," which is layered over Swift's song.

Adkins performed the choreography from the viral "WAP" dance challenge on TikTok, all while remaining in character as Swift.

According to Adkins' page, the TikTok video has since been removed by the platform, but that didn't stop Cardi B from taking notice of the creative video, which has gone viral on social media.

"I ain't saw that coming," the rapper captioned a retweet of Adkins' video on Twitter.

Cardi previously spoke out about her love of Swift in 2017, after the "Cardigan" singer sent her flowers to celebrate "Bodak Yellow" earning the coveted No. 1 spot on the Billboard Hot 100, which dethroned Swift's "Look What You Made Me Do."

"Thank you @taylorswift for the flowers …. and I freaking love your music," Cardi captioned the video showing her flowers from Swift.

Watch Princess Diana's Heartbreaking Message in The Crown S4 Trailer: “All I Want Is to Be Loved”