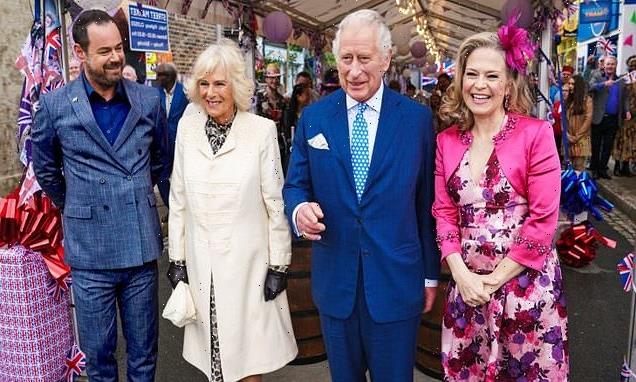 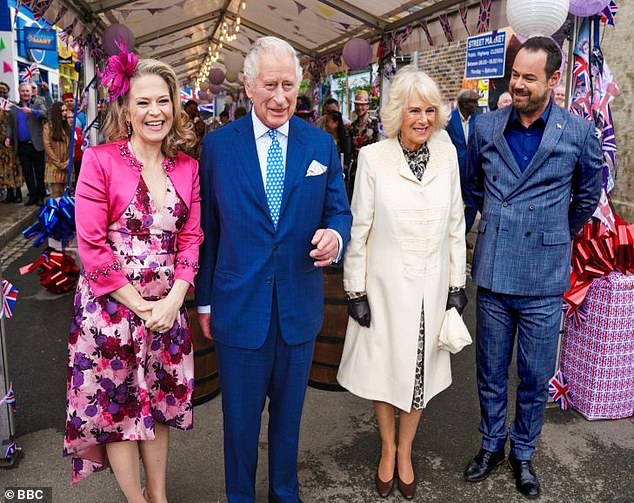 Prince Charles and the Duchess of Cornwall pay a surprise visit to Walford to mark the Queen’s Platinum Jubilee. Pictured, with Linda and Mick 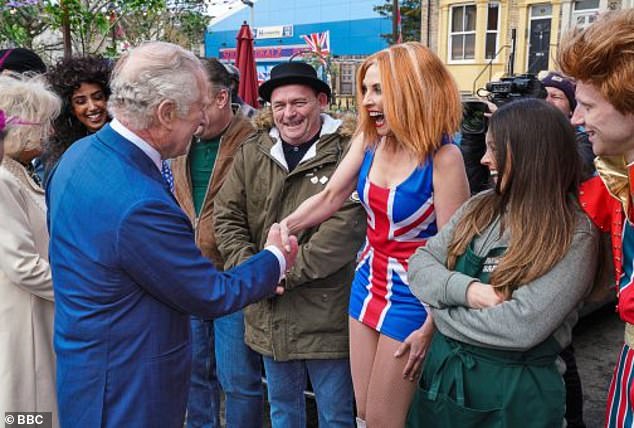 Honey, dressed as Ginger Spice, who’s said to have pinched Charles’s bottom when they met in 1997, greets Prince Charles in the special Jubilee episode

You can always rely on Linda to dip into her Quality Street selection of attire for the big occasions.

So, when the Prince of Wales and Duchess of Cornwall pay a surprise visit to Walford, you know Linda is set for a collision course of Big Purple One meets the rest of the tin – after a day melting in the sun.

And she doesn’t disappoint. Neither does Honey, dressed as Ginger Spice, who’s said to have pinched Charles’s bottom when they met in 1997.

True to form, the locals throw themselves into the Jubilee celebrations but are stunned when Mick and Linda greet the special guests. Mick, of course, is in awe (although not as in awe, I fear, as he was when Harry Redknapp turned up last year), and after introducing the royal couple, everyone joins in a toast to the Queen. Gawd bless ‘er.

THE PRINCE OF CHIVALRY

The visit by the Duke and Duchess of Cornwall to the EastEnders set was thoroughly entertaining off camera, by all accounts. Complaining about the freezing cold during the photo shoot, Letitia Dean (Sharon) was enamoured with a chivalrous Prince.

‘I would love your coat… and your ear muffs,’ said the shivering actor, before the heir to the throne put his coat around her. ‘Hang on, mind me wig,’ she added, struggling with the huge collar. She described the occasion as ‘one of the best days of my life’.

The occasion might prove to be something of a turnaround for Linda, who decides to throw herself into organising the festivities rather than indulge in a bottle of wine (is there any left? I hear she’s drinking it faster than producers in Burgundy can pick the grapes.

There’s talk of just hooking her up to the vine and cutting out the middleman). Mick is thrilled to see Linda hosting a planning meeting, but she’s deflated when he implies he doesn’t trust her enough to use her newly acquired cash to expand the Vic’s business (who can blame him?

I suspect that expansion involves putting in another three cellars). Instead, Linda invests in the salon and becomes co-owner. Now, finally, maybe she’ll get a decent hairdo.

Talking of future plans, Zack and Nancy are hard at work on their new restaurant, but it all goes horribly wrong (yer don’t say: this pair couldn’t sell an ice cream in a heatwave).

Nancy is furious when Zack doesn’t pick up the keys after taking Jada to see famous London sights; the future looks less than bright when Zack rejects Jada’s advances, and the hurt youngster tells Sharon he kissed her. Brother or not, don’t expect the walking foghorn to keep quiet about that for long.

The week sees high drama involving a flashforward of Imran leaving a message for Toyah, confessing his transgressions. Moving back and forth, we witness a car crash that leaves both Imran and Toyah unconscious in the wreckage.

‘It felt like we were making a movie. But we kept the mood light in between takes, despite being covered in fake blood.’

Small wonder, I’ve seen more substantial pancakes than those air bags. The two good things to emerge, though, are that Imran’s suit and tie remain perfectly intact, and that something has finally wiped the smirk off Toyah’s face.

Do they survive, or are we set for another funeral? I can already hear Tracy snipping those stems for a wreath (or two?).

With the police unconvinced that the crash was an accident because the car didn’t brake, attention turns to Kevin, who’d worked on the vehicle. Well, for ‘worked on’, read ‘held spanner in hand while making a brew’.

Despite having aided Abi in trying to do a runner with Alfie, Kevin’s an unlikely suspect (if he goes to the pub, he needs a nap en route), but then the Weatherfield police are not the sharpest tools in the box. The week’s events see Kevin wanting Abi back in his life; let’s hope he utilises her supposed mechanical prowess to check out the air bags in other cars. 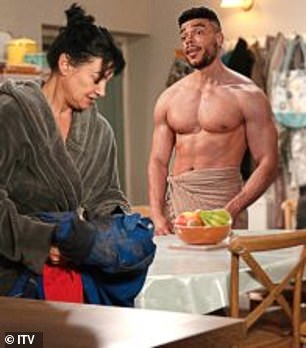 The half-dressed male wrapped in nothing but a towel has long been a feature of Soapland, and now Emmerdale is at it again with Nate half baring all. But why is Moira in her dressing gown?

Have the pair rekindled their affair? That’s the conclusion Chas jumps to when she plots to catch the couple in the act and walks in on them; but is all as it appears to be? And why does nobody ever lock their doors in this village?

Is anyone buying Leyla’s sudden transformation into the Pablo Escobar of the Dales? Desperately searching for coke in Suzy’s bag, she’s caught redhanded (or white-handed?) and later unsympathetically lashes out at Priya, who is understandably devastated.

David is trying to hide his money troubles from Victoria and tells Eric how much the pandemic affected his business. Trust me, his problems started long before that.

As I’ve pointed out before, selling one jar of chutney a year doth not a Jeff Bezos make. Will Eric come to his son’s rescue?

Knowing Eric’s natural propensity for dodgy business deals, he might be the right person for the job – or the wrong one. Heck, buying just one jar of chutney would double David’s income.