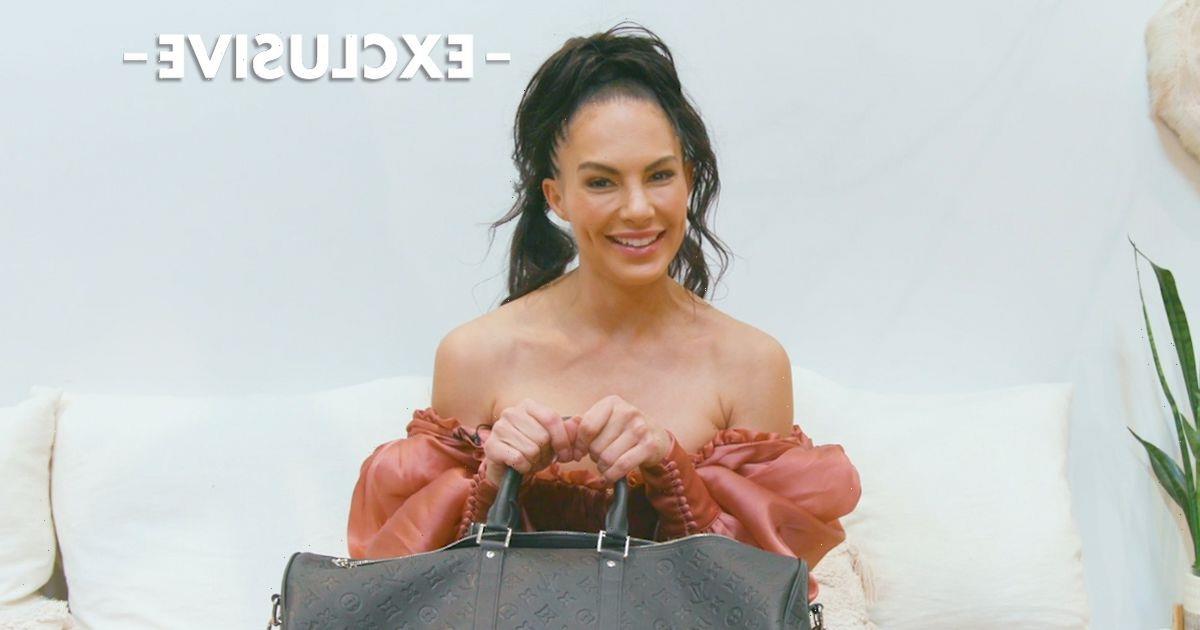 The luxury estate agent is known for her glittering lifestyle and glamorous fashion – so it's no surprise that Amanza Smith's bag is packed with luxury items.

Although, as a single mum-of-two to son Braker, nine, and daughter Noah, 11, it’s clear that she also has to think practically!

Just for OK! VIPs, Amanza opened up her Louis Vuitton bag to share which items she can’t live without and explained why they are her go-to’s as she juggles motherhood with life as a reality star estate agent.

Are you an OK! VIP? If not, why not? It’s free and gives you backstage access to stories like this, exclusive home tours, special discounts and so much more! All you need to do is pop your email address below! P.s. if you’re already seeing this article in full, congrats – you’re already on our guest list! The 44-year-old began by addressing the elephant in the room – the size of her huge designer holdall. Amanza jokes: “This is what I keep in my bag, my very small bag.”

“I’m a mum so I have to carry something large that is always in my car,” she explained.

To receive big exclusives like this to your inbox every week, sign up to our VIP newsletter here

Keen to keep up her impeccable appearance, Amanza revealed that one thing she always has to have with her at all time is her edging comb and olive oil edge treatment “to slick back all the little fly-aways.”

Pulling out a beauty item from Khloe Kardashian’s makeup collaboration, the reality star explained that she keeps her BECCA bronze, blush and glow palette in her bag so she always has a flawless finish and glowy skin.

The reality TV star told OK!: “I’m not the best with makeup, but you can just put it on and it just looks perfect no matter how you put it on your face."

A must-have during the pandemic, Amanza said she carries hand sanitiser at all times and told us it is an essential as a busy mum.

“Not just because of Covid but because I’m a mum I always had it anyway," she said. "This one is great because you can put it on as deodorant and you can also put it on blemishes.”

To hear more about what Amanza keeps in her luxurious bag, watch the exclusive video above.

Here, Amanza opens on starting a "search party" for her ex-husband, battling life as a single mum, and tells us how head over heels in love she is…

Hi Amanza! Are you excited about filming the fourth series of Selling Sunset?

Yeah, and I’m nervous. I remember how taxing it is to film. My life has settled down a bit, so I’m excited to show the world that I have it together now. I’m not always late, frazzled and sad. I’m able to be more honest about what was actually going on with my kids’ father because I tiptoed around it so much in the last season.

So, tell us what you were actually going through?

When we first started filming, I was in a situation where the kids would spend one week with me and the other with their dad because we had joint custody. We had a great relationship and he was an amazing father. It had been that way for eight years since we got a divorce when the kids were aged one and two. Then we were about three weeks into filming, he dropped them off at school and just never came back, so they were with me full time. We didn’t know what had happened to him or when he’d be back. I didn’t want to say all of this at the time because I didn’t want to throw him under the bus if he came back and there had been some emergency. But seven months into filming, it hadn’t changed. There’s a specific scene in the last series where I’m 20 minutes late, but what no one sees is that I was bawling my eyes out in the car because I’d been at the courthouse fighting for custody of my children. Half the time in my scenes I was falling apart on the inside.

How have you explained that to the kids?

It’s been traumatic. The first seven months I was rocking them to sleep every night and wiping their tears. I had to answer their questions without any real answers. My best answer is that their dad might be going through something. One night one kid would cry themselves to sleep, the next night it would be the other one. Then I would cry myself to sleep. But most recently, when I decided I had the mental capacity to deal with it all, it hit me hard. I laid in bed for three days and my assistant had to look after the kids.

What are the next steps for you now?

I’ve now started a search party. I want to find him and need answers. His family say they don’t know anything. So I’ve got my own people looking and I’m on a mission to find him. My son has said if he turned up now he wouldn’t want to go with him. He says he doesn’t think his dad loves him.

As the father of your children, you must genuinely care about his wellbeing…

For sure! People think I want to find him so I can get child support, but it has nothing to do with that. I genuinely do care. I can’t be angry with him yet because I don’t know what’s happened.

Do you have full custody of the children?

Has your Selling Sunset co-star Mary Fitzgerald been a big support to you through all of this?

Yeah. She’s been my best friend for 20 years. A lot of my friends don’t even know what I’m going through until I open up about feeling depressed or anxious.

What do you do to get through your depression and anxiety?

I’ve suffered with severe anxiety since I was a kid. I had regular panic attacks, but I only realised what it was about six years ago. Mental health was so taboo where I was from and I didn’t go to therapy or anything like that. But in my adult life, I questioned why I’d get so irritated about little things. So I went to a therapist and now I take antidepressants every day. It’s called Zoloft and I’ve been on it for six years and I swear by it. It changed my life. I realised I was chemically imbalanced. I also pray and meditate.

Are you proud of how you’ve juggled everything as a single mum?

I’ve been struggling. I have a lot of mum guilt right now because I’m so busy. I do feel like I can’t be as much as a connected parent as how I used to be. I feel like I’m not doing the best that I can. It’s really tough, especially over the past year and a half. They used to go to their dad’s every other week, but since that changed I feel like I see them less because I’m so busy. I don’t think I do the best job at balancing all of it. I’ve made changes in hiring staff to help where I need it, so I can be more present as a mum. But it’s hard – I don’t know how I do it sometimes.

What staff have you hired?

I’ve never had a nanny, but now I’m interviewing full-time nannies and I’m thinking of getting them to live with us because when we film it’s such a rigorous schedule. Also I’ve never had a housekeeper, but now I have the means to be able to employ someone to help with that. Then lastly, I have a personal assistant. When I first moved to Los Angeles 20 years ago, I was dating JC Chasez from NSYNC. I saw how busy he was and he had an assistant who lived in his house. I’d pray that I’d be so busy one day that I’d need someone delegating my day. Now, here it is but I wasn’t prepared for it! So careful what you wish for [laughs].

Would you say it’s been your success on Selling Sunset that has given you the means to hire your own staff?

For sure. I’ve been through ups and downs in my life, but Selling Sunset came along at the same time that I was building my own business, so it’s been the perfect marriage. The success of the show has allowed us to get the help we need. But I’m still the little Indiana girl. I’ve been on the other side of the fence and I don’t take anything for granted.

How is your current dating life?

I’m very much in love with someone. He’s the coolest, hottest person! We want to keep it private for now because lots of people want to see you fail, especially if you’re in the public eye like me. But he is amazing – I’m off the market.

Is he also in the public eye?

Yes. He’s not an actor and he’s actually 10 years younger than me [laughs].

Can you see marriage and children with him in the future?

I’d love more than anything to be married again. I’d love to have another child, but I’m realistic. I’m 44, so to have one naturally probably isn’t the safest route. I’m planning to freeze my eggs soon. I’ve always wanted to adopt and I will one day.

We’re excited for the new series of Selling Sunset. Was it hard seeing Chrishell Stause go through such a public divorce in the last series?

Yeah, we lived it in real time and it was devastating. A month after the show came out, Chrishell then lost her mother to the same cancer she’d lost her father to.

And things didn’t work out for her and Keo Motsepe…

No, they aren’t together now. I think she dodged a bullet there. I’ve never been a lesbian, but she’s so beautiful – we joke that we’d get together if we don’t find anyone.

Your co-star Christine Quinn is expecting a baby! Are you excited?

So excited. I know she’ll be in six-inch Louis Vuittons pushing the best baby stroller. I love babies! I want nothing more than to have 100 kids myself, but that’s not going to happen unless I adopt them.