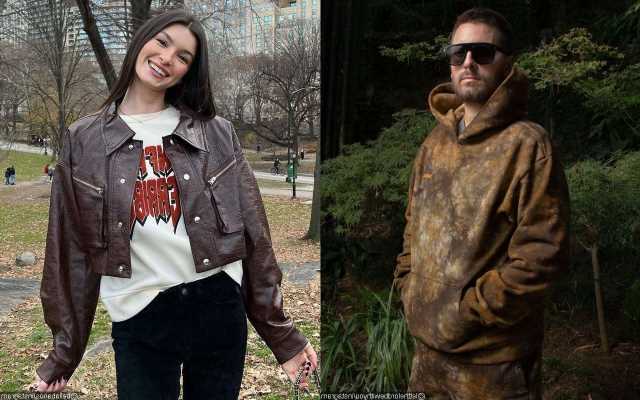 The former ‘Flip It Like Disick’ star is photographed walking along the seashore with the model to whom he was previously linked during his vacation in St. Barts.

AceShowbiz –Scott Disick seemingly continues enjoying his single life. The “Flip It Like Disick” alum has reunited with model Bella Banos as they were photographed taking a sexy beach stroll amid rumors claiming that he’s open to settling down.

In photos circulating online, the former “Keeping Up with the Kardashians” star hit the beach with Bella, to whom he was previously linked in 2017, during his vacation in St. Barts. Soaking up the sun, the two were seen taking a stroll by the water.

For the occasion, Scott sported an ombre button-up top and dark shorts, while his lady companion opted for a neon green bikini. Both capped off their beachy looks with sunglasses, while the 38-year-old reality star was also seen carrying his phone in his hand. The pair looked happy as they walked along the seashore.

The beach sighting came after a source claimed that Scott is open to “settling down” with a special someone following his split from Kourtney Kardashian. “Scott could absolutely see himself settling down again with somebody,” a source revealed to HollywoodLife.com earlier this month. “He’s open to it, but he’s also not pushing the subject either. If it happens, it happens.”

The so-called inside source went on saying that while he’s not “fully” moved on from Kourtney, with whom he shares three kids, the restaurateur is not planning to let it stop him from moving forward in his life. “It may take Scott a while to fully move on from Kourtney, but it is what it is,” the source claimed. “Scott is focused on his kids and work, and just putting his energy into whatever makes him happy.”

Prior to hanging out with Bella, Scott was caught on camera several times enjoying date night with a slew of women, including Brooklyn Beckham‘s ex Hana Cross, Christine Burke, Elizabeth Grace Lindley and some unidentified women.

Most recently, Scott was photographed with an unknown woman at an event in Miami. However, a source denied that there was something romantic between the two. “Scott was in Miami to host an event for Cigarette Racing Team, which is a 40-year-old company based in Miami that builds Deep-V boats for racing,” the insider noted. “This mystery woman was simply a friend of his, Diana Diaz, who was also working with the event organizers. Diana is married and it was strictly business.”