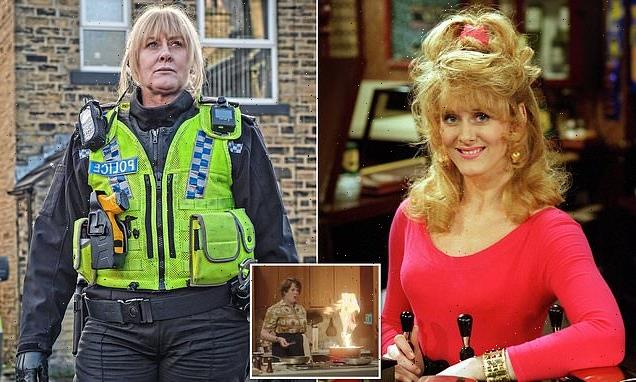 Her award-winning ability to play feminist icons across all genres of acting has won Sarah Lancashire national treasure status. Not that that’s something she particularly revels in, friends say.

There’s no ego, no social media profile, no publicity machine. She makes red carpet appearances – but only if an absolute must.

So it has come as a surprise even to Lancashire herself that at the age of 58, after a glittering 35-year career, she has finally cracked America. Albeit unintentionally.

On this side of the Atlantic, the actress – who rose to fame as Coronation Street’s much-loved barmaid Raquel Wolstenhulme – makes her long-awaited return tonight as Sergeant Catherine Cawood in the third and final series of Sally Wainwright’s Bafta award-winning crime drama Happy Valley. 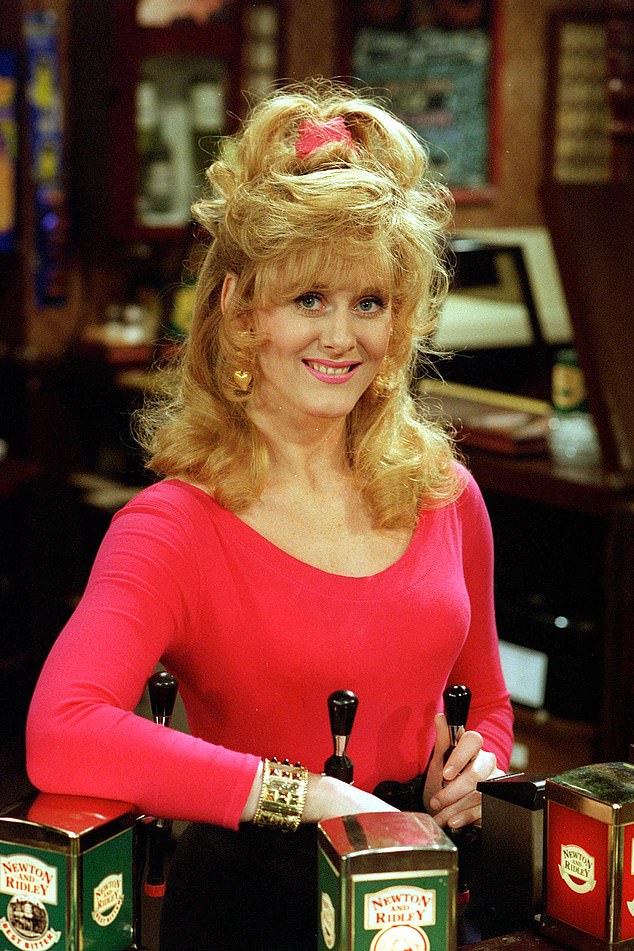 But Stateside too, Lancashire has won herself a huge new fan base. And now Hollywood agents are chasing her to take on more roles.

Shortly before lockdown, the star was approached to play Julia Child, the pioneering American television chef who made her name by bringing French cooking to the States during the sexist 1960s.

She had little idea of who Child was, other than that Meryl Streep had played her in a 2009 biopic, Julie & Julia – a role which secured the Hollywood A-lister an Oscar nomination. And she knew Child was a gregarious, successful middle-aged woman at a time it wasn’t easy to be one.

The call came at the end of 2019, just as Lancashire, a mother of three, had decided she wanted to take a year off acting. Days into her sabbatical, her agent was in contact, asking her to read a pilot script for a new HBO production. 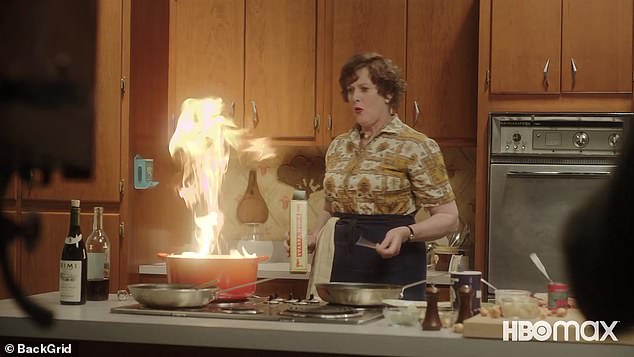 The star was approached to play Julia Child, the pioneering American television chef who made her name by bringing French cooking to the States during the sexist 1960s

A dozen pages in and Lancashire was won over. She flew to Los Angeles on her first-ever work trip there to audition – even though she didn’t expect to get the role.

‘This is not grandiosity. I never got the job as a young actor because I was so hopeless in auditioning,’ she said.

Instead, she decided to take her youngest son Joseph, now 18, and make a holiday of it. ‘We flew home and I forgot about it,’ Lancashire added. But soon afterwards, her agent rang. America – finally – had come calling and her career hiatus was put on hold.

But lockdown struck, halting filming after just three days. Production didn’t resume until the summer of 2021 – and Covid restrictions then meant she was unable to see her family back in Britain. Every cloud, though, has a silver lining.

‘It’s not an experience I care to repeat, in terms of being isolated away from family,’ Lancashire told Vanity Fair magazine during her only US interview. ‘To be perfectly honest, I think I was slightly saved the first time we were closed down. I don’t think I was ready.’ When filming once again started, she threw herself into being Julia, ditching a voice coach and going it alone. She would fall asleep to clips of the chef on her iPad, or would sit by Boston harbour rereading her scripts, immersing herself in her new character. 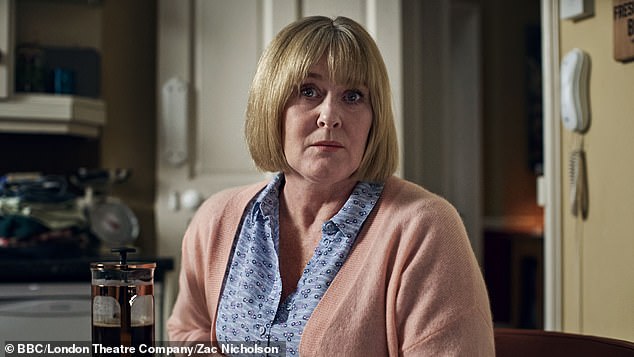 Lancashire says being a mum is her most important role. She has three sons: Tom, 34, and Matthew, 32

Today, Lancashire is widely recognised on the streets of the Massachusetts state capital, where she has recently finished filming the second series of the programme. She has a loyal fan base in the US, and Tinseltown insiders, it seems, are desperate for more of her.

One said: ‘Hollywood loves a Brit, especially one who is a British national treasure like Sarah. There are so many opportunities for her here.’

The actress, however, may need some persuading, because she is more than happy with her lot.

While she hails from Oldham, where she grew up with her three brothers, her Coronation Street scriptwriter father Geoffrey and her mother, his PA, Lancashire is now settled in London.

She lives in a £3 million, five-bedroom house on a quiet road in the South-West London enclave of Twickenham with her husband Peter Salmon, the former controller of BBC One, who famously refused to move to Salford despite being the head of the Corporation’s North division. Locals occasionally spot her in her nearby Tesco, as well as out walking with Salmon and their son.

Lancashire says being a mum is her most important role. She has three sons: Tom, 34, and Matthew, 32, from her ten-year marriage to musician Gary Hargreaves, and a teenage son Joseph with Salmon.

She said: ‘The older that I get, the harder it is to be away from home. I love being at home. I’m very much a mum when I go home – the mums among us know it’s a full-time job.’ She has, though, recently spent time back in the North, filming the final series of Happy Valley.

The part of Sergeant Cawood was created especially for her by Wainwright, who was so blown away with the actress’s Bafta-winning performance as lesbian headmistress Caroline in BBC drama Last Tango In Halifax that she knew she wanted to work with her again. 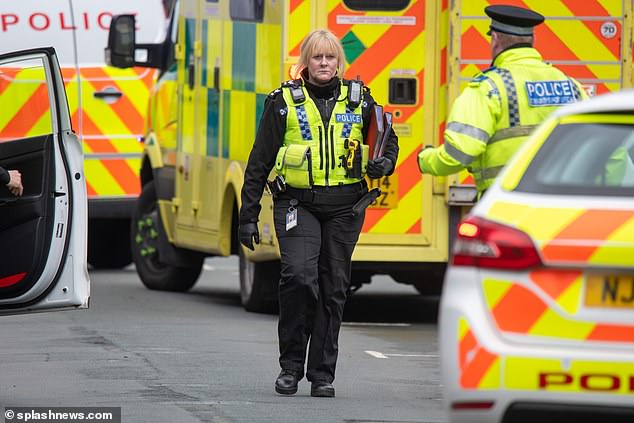 The part of Sergeant Cawood was created especially for her by Wainwright, who was so blown away with the actress

However, despite her professional success, Lancashire’s personal life has at times been tough. Despite winning accolades for her five years in Coronation Street (she left in 1996) and dramas such as Where The Heart Is, Clocking Off and The Paradise, the actress has spoken of how she has secretly battled depression, and even considered suicide.

Indeed, she spent some of what should have been her best years back in the 1990s unable to get out of bed. She described her breakdown as a ‘timebomb waiting to go off’ and ‘absolutely debilitating’.

‘I certainly didn’t tell anybody at the studios, and I didn’t take any time off,’ she said. ‘I was terrified of being judged and misunderstood. I just battled along.

‘It was the worst thing I could have done. Being in the public eye makes you frightened to talk openly about things – which is precisely why you should. You can really make a difference and open up subjects that are taboo.’

Later, she revealed that she had been diagnosed with clinical depression at 18, saying: ‘I have never known what it feels like to wake up in the morning full of the joys of spring, and wander through the day feeling capable of coping.’ However, a few years ago Lancashire described herself as ‘a little more together’, joking that she was ‘just about ready to go on a bus by myself’, keeping her depression at bay with therapy and medication.

‘I have my good and my bad patches, my fantastic and my debilitating patches,’ she added.

For now, though, the acting world is Lancashire’s oyster.

It is back with a bang… but, seven years on, can Catherine finally defeat evil Royce?

It begins with the discovery of the remains of a gangland figure in a drained reservoir – and leads Catherine to jailed Tommy Lee Royce.

She holds Royce, played by James Norton, responsible for the suicide of her 18-year-old daughter Becky, who killed herself weeks after giving birth to Ryan, conceived after she was raped by the psychopath. 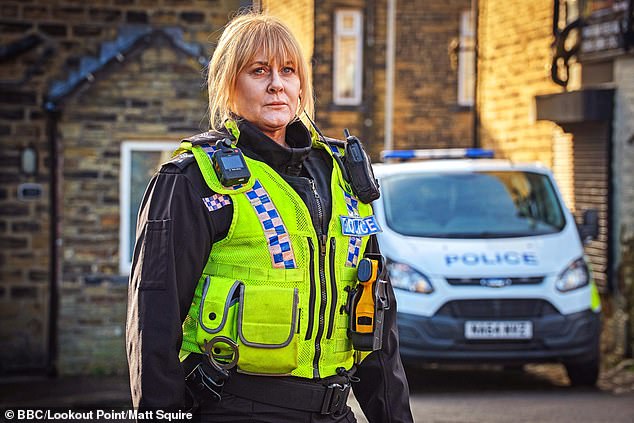 Catherine is terrified her grandson may grow up to be like his father. Royce persists in taunting her about Becky’s death and wants to be part of Ryan’s life.

So who are the key characters?

The beating heart of the local community, Catherine, far right, never minces her words and holds her own in a fight. She will do anything to help colleagues, friends and family. As the third series opens, she is just ‘seven months, one week and three days’ away from retirement and has bought a Land Rover to travel to the Himalayas. She is less worried about Ryan, whom she is bringing up.

The convicted killer and rapist, right, aims to make Catherine’s life a misery. The last series ended with the convict reading a letter from his son Ryan promising to stay in touch, despite efforts by Catherine to keep them apart. Royce had managed to convince a prison visitor to get a job as a teaching assistant at Ryan’s school so he could gain contact with the boy. 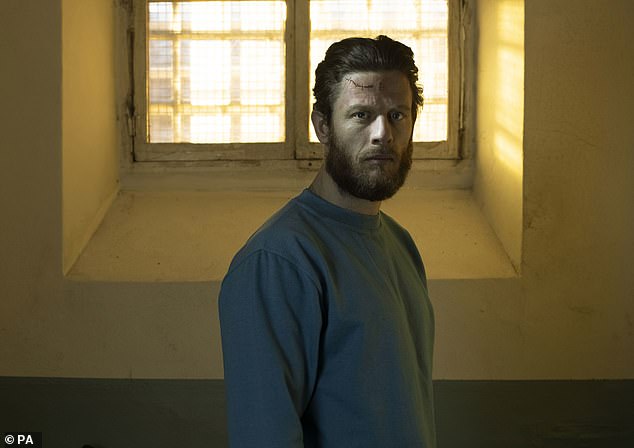 In the last series, the schoolboy ignored Catherine’s warnings and tried to keep the lines of communication open with his father. He accepted Royce’s gift of a Scalextric set for his tenth birthday, and was distraught when his grandmother made him return it. Now, he is celebrating his 16th birthday and appears to have dropped the pre-occupation with his father. His most troubling relationship is currently with a loathsome PE teacher.

Clare, above, is Catherine’s devoted sister. In the last series, the former alcoholic and heroin addict fell off the wagon after entering into a relationship with old school friend Neil Ackroyd. Seven years later and Clare is finally clean again and has set up home with Neil, also back on the straight and narrow.

Now the family appears to have grown even more powerful, and Catherine is frustrated by the inability of the police to bring them to book. There is a suggestion that one of the Knezovics might try their hand at local politics. 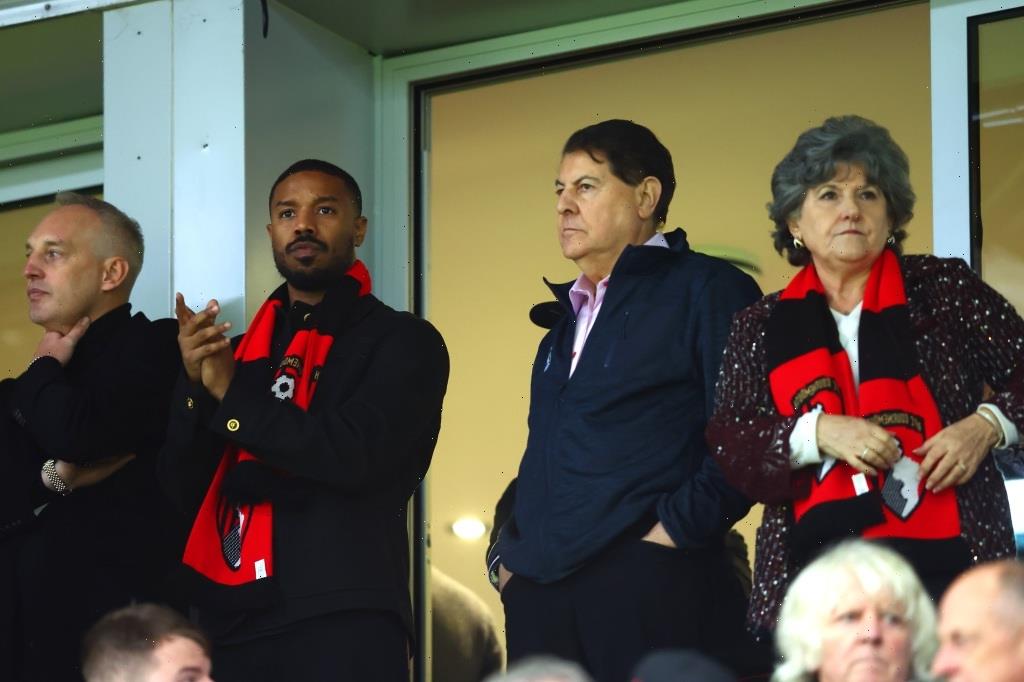