Sam Asghari has just one thing on his mind this holiday season when it comes to fiancée Britney Spears.

Sam Asghari teased he and his fiancé Britney Spears, 40, will be “baby making” over Christmas! The 28-year-old fitness trainer was caught on camera as he left a Saturday afternoon gym session in Los Angeles when he revealed their “Christmas plans” to a TMZ videographer on Dec. 18. “Baby making,” he pointedly said, stepping into a black Mercedes-Benz G-Wagon. “Baby making, a lot of baby making,” he added.

As always, the fitness trainer looked buff in a fitted black tank top, shorts and neon sneakers. During the chat, he was also asked about rumors around an appearance in an upcoming Magic Mike film. “I got an audition man — if you see Channing [Tatum], put in a good word for me…wish me luck,” he hilariously added. As he pulled away with his windows down, it was pointed out he got a parking ticket, to which cool and calm Sam replied, “Amazing — I’ll add it to the collection.” 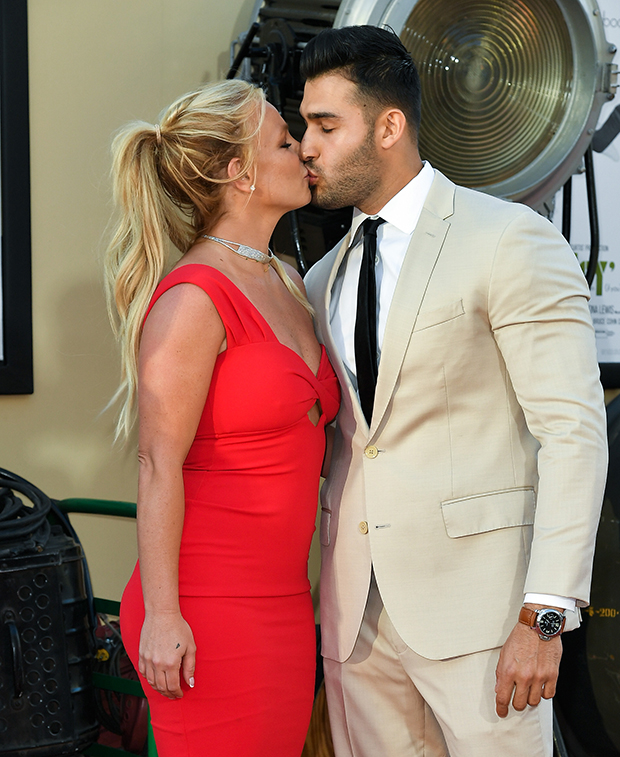 Sam and Britney got engaged in Sept. 2021 after nearly five years of dating. The couple originally met on the set of her music video “Slumber Party” with Tinashe, where Sam played Britney’s on-screen love interest. Despite the control of her conservatorship, the pair maintained a low key romance — with Sam supporting Brit as she publicly advocated for her freedom. He popped the question after her two back-to-back bombshell court testimonies, where it became fairly clear the legal arrangement would be coming to an end (which it did on Nov. 12).

Ahead of the proposal, Sam seemingly teased the Cartier ring on social media — revealing that he had the nickname “Lioness” inscribed inside. Britney was over the moon on Sept. 12 as she showed off her new piece of jewelry on Instagram for her millions of fans. “Can’t f***ing believe it!!!!!!” she wrote, alongside engagement ring emojis and an exclamation heart while holding her hand up to the camera.

In her court testimonies, Britney made it very clear she wants another baby. “I have an IUD in my body right now that won’t let me have a baby and my conservators won’t let me go to the doctor to take it out…They don’t want me to have another baby,” she stated in court on June 23.

Just two weeks ago, she teased that she was “thinking” about a third child. “I’m thinking about having another baby !!!” she wrote via Instagram. “I wonder if this one is a girl … she’s on her toes reaching for something … that’s for sure !!!!⁣” Notably, she is mom to son Jayden James, 15, and Sean Preston, 16, with her ex-husband Kevin Federline.

Sam doesn’t have any kids of his own just yet, but he’s been open about wanting to be a “young dad.” While speaking to Forbes about his Asghari Fitness app, he said, “I want to be a young dad…I want to take my relationship to the next step. I don’t mind becoming a father…My priorities in life are to remain humble and understand where I came from and where I’m going.”