Saint West is already a pro at throwing some serious side eye. Kimye’s oldest son directed it at his big sister North, looking like he was shading her in new photos mom Kim Kardashian posted on IG.

After years of North West stealing the spotlight as the most sassy of Kim Kardashian and Kanye West‘s children, her five-year-old brother Saint West is showing off that he’s got just as much personality. Kim, 40, shared a series of photos of her four children to Instagram on Dec. 7, and in the first picture, Saint was throwing some seriously major side-eye towards his seven-year-old sister. Kim has said in the past has said how North “does not like her brother” and maybe he’s come to realize it.

While North looked directly at the camera with a solemn expression on her face, Saint had his head slightly turned in her direction and was giving his sister a searing case of side eye. In the accompanying photos, Saint was seen holding on to his one-year-old brother Psalm while North didn’t so much as glance in their direction. In another picture, North was seen playfully rough housing with baby brother Psalm on the ground, while Saint was nowhere in sight to join in on the fun with his eldest and youngest siblings.

Saint could be seen wearing a New York Jets football jersey, and standing to the far right side of the frame in the side-eye photo. North stood on the far left away from him, wearing a shirt giving props to her attorney-to-be mom that read “Kim is my lawyer.” In between the eldest siblings were Kim’s two youngest, as North held on to smiling two-year-old sister Chicago‘s arm, while Psalm stood between her and Saint. 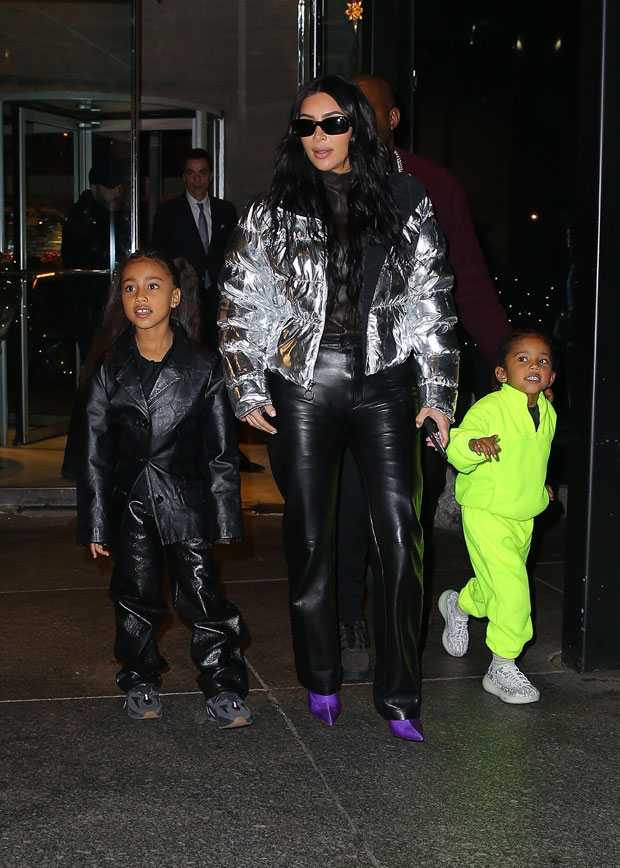 Kim has revealed in interviews over the years that North did not take well to Saint coming along and taking away her only child status. In Aug. 2017, she revealed on Live with Kelly and Ryan that “I don’t know if it’s because she’s the older sister. I don’t know what it is. I thought it was a phase. She does not like her brother and it’s so hard for me.” At the time North was four and Saint was 20 months old. “She would get so jealous when I would breastfeed and all that kind of stuff,” Kim explained, adding “And now, the phase isn’t going away.”

In an Apr. 2018 appearance on Ellen, Kim revealed that North was a lot better with her new baby sister Chicago than she was when she got Saint as a little brother. The KKW Beauty founder explained that they had a huge breakthrough when North actually offered to share something with Saint. “There was a shocking moment yesterday. She literally had a can of popcorn and was like, ‘Saint, do you want some?’ And I was like ‘What!?” You gotta understand, she does not share with Saint, she does not hardly talk to Saint, so that was such a big moment in my household.” Maybe now Saint is getting old enough that he’s throwing side eye at North for how she treated him when they were younger!