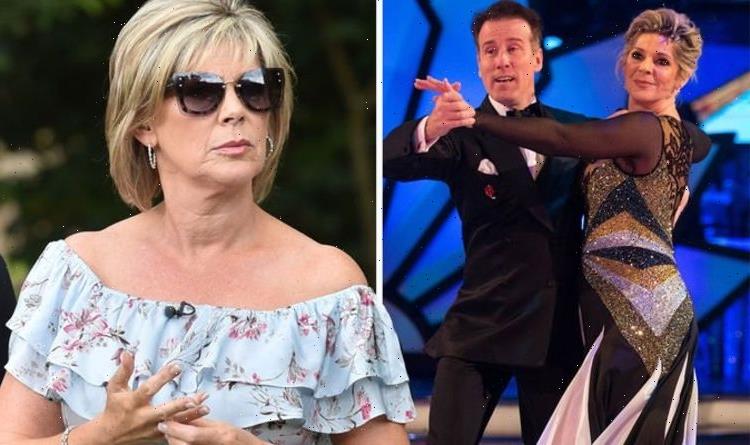 This Morning and Loose Women star Ruth Langsford almost didn’t make it onto the dance floor for her first dance with Anton Du Beke when she appeared on the BBC ballroom dancing show four years ago. The 61-year-old presenter has since said she was struck by “blind terror” ahead of her debut.

And now, her partner has revealed that she was crippled with “Strictly fear”.

Anton, 55, who will return for the 2021 series as a judge, said: “It took four of us to coax her down the big staircase.

“At one point I was doing a lift and she whispered in my ear, ‘I can’t feel my legs, Anton. Don’t put me down’.”

Fortunately, Ruth didn’t need to worry, as the couple delighted audiences with their debut performance – a Waltz to This Nearly Was Mine.

However, the Strictly fan-favourite said the TV presenter would often struggle in between the live shows as well.

She would get quite tearful in the training room while trying to learn the complicated dance routines.

“Ruthie would call them Teary Tuesdays. Sometimes we had Weepy Wednesdays, too,” Anton told the Daily Mail.

The couple went on to finish the competition in a respectable ninth place.

Ruth, who is no stranger to live television, spoke of her stage fright during an appearance on spin-off show It Takes Two.

She told presenter Zoe Ball: “I was more than nervous. This was blind terror.

“I just looked at Anton and I felt like my feet had been cemented to the floor. I said, ‘I can’t’, and he just said, ‘You can’.

“I couldn’t feel my whole body … I thought I had someone else’s legs.”

Anton, who has starred on the popular show since its debut in 2004, will replace Bruno Tonioli on the judging podium this year due to coronavirus restrictions preventing the Italian judge from travelling.

The father-of-two said he was “absolutely thrilled to bits” to be a judge on the programme when the news was announced in June.

“There’s nowhere better than a seat at that legendary desk!!” he wrote online, in view of his 245,000 Instagram followers, at the time.

The professional dancer briefly took on the role of judge during the 2020 series, replacing Motsi for a couple of weeks.

Despite swapping the dance floor for the panel, Anton is not giving up performing just yet.

Since last year’s series, he has been on stage with co-star Giovanni Pernice.

The pair joined forces for their Him and Me tour.