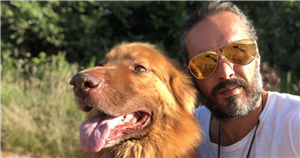 Russell Brand has become the talk of his town after saving a baby wallaby's life seconds after his pet dog killed his mother.

The 46 year old comedian's heroic efforts occurred as he innocently set out to walk his German Shepherd, named Bear, near his Henley-on-Thames homes in Oxfordshire.

The area is known for its population of wild wallabies, which are believed to have originated two decades earlier when a group of marsupials escaped a private collection.

And 46 year old Russell immediately sprang into action when he saw a mother and child wallaby in danger from his own beloved pet pooch.

Onlookers told The Sun: "Absolutely no one is ­blaming Russell or his dog — it's just a horrible accident.

"In fact Russell was the hero because he managed to save the little joey. It could have been far worse if he hadn't stepped in so quickly."

Speaking of Russell, who is vegan and hasn't consumed meat since the age of 14, the local resident continued: "I understand he's devastated over what happened. It's really sad."

Russell's dog Bear, who he described as a "beautiful hooligan" and an "a tornado of fur", has reportedly also killed a sheep in the past.

The former wild child has now settled down with childhood sweetheart and wife, Laura Gallacher.

Russell saw immense backlash after he informed the songstress he was filing for divorce by text after just 14 months of marriage in 2011.

In a previous interview with US Weekly, he said: "I think I'm an easier person to be with now. I'm also in a very different situation. I'm dependent on my wife."