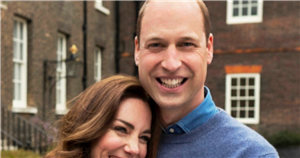 The Queen has passed on her congratulations to Prince William and the Duchess of Cambridge in celebration of their 10th wedding anniversary.

In the tweet, the Queen said: “Wishing The Duke and Duchess of Cambridge a very happy wedding anniversary.

The thoughtful message came just two weeks after the royal family laid the Duke of Edinburgh to rest at St George’s Chapel, the same place her grandson Prince Harry and Meghan Markle tied the knot just three years prior.

Earlier in the day Kensington Palace shared two snaps of Kate and William to mark the milestone.

Husband and wife wore a coordinating blue ensemble for their special day.

The celebratory shots, taken by photographer Chris Floyd, showed the Duke of Cambridge, 38, dressed in a in blue button up shirt paired with his navy jumper and matching dress trousers.

The Duchess of Cambridge, 39, perfectly complimented her husband in a pale blue floral chiffon dress pairing beautifully with her engagement ring which used to belong to the late Princess Diana.

The doting wife wore her brunette locks in loose beachy waves which showed off a beautiful £9,000 diamond necklace.

This comes after the loving couple attended various charities connected to royals throughout the week to celebrate the special occasion, including a trip to Manor Farm in Durham.

The pair enjoyed the country views during lambing season on the farm as the Duchess was pictured with the one of the young lambs and got behind the driver’s seat in a tractor.

Looking back on their big day, the couple got engaged during a holiday in Kenya back in October 2010, and finally tied the knot on April 29 2011 in Westminster Abbey, watched by millions of people across the world.

The pair have since become parents to three children: George, seven. Charlotte, and Louis who recently celebrated his third birthday.