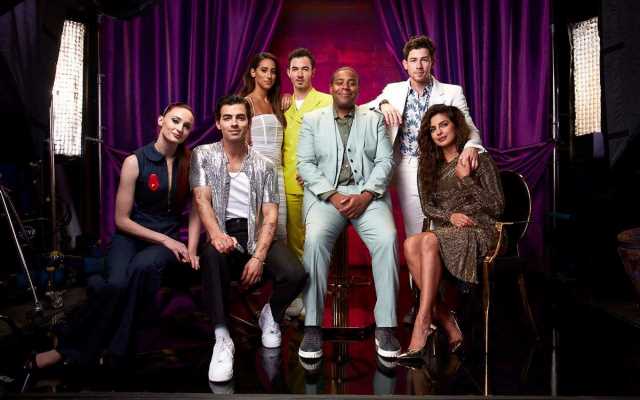 Taking the stage for ‘Jonas Brothers Family Roast’, the ‘Baywatch’ beauty pokes fun at her brothers-in-law as well as the 10 year age gap between her and her husband.

AceShowbiz –Priyanka Chopra showed off her skills as a funnywoman while roasting her husband, Nick Jonas, and his brothers during a recent comedy roast.

The Indian star took to the stage for Netflix’s “Jonas Brothers Family Roast” special, which is now streaming on the platform, alongside her sisters-in-law Sophie Turner and Danielle Jonas and comedians Kenan Thompson, Jack Whitehall, Lilly Singh, and Pete Davidson to poke fun at the boys.

The “Baywatch” stunner kicked off her comedy debut by stating, “I am honored and so thrilled, actually, and tickled to be here tonight to roast my husband, Nick Jonas, and his brothers, whose names I can never remember.”

She added, “I’m from India, a country rich in culture and music and entertainment, so clearly the Jonas Brothers didn’t make it over there.”

Priyanka also poked fun at the 10 year age gap between her and her husband, joking he has taught her all about modern trends like TikTok, and “I showed him what a successful acting career looks like.”

And she had Nick sweating when she joked about expecting.

“In all sincerity, I love that I married a man, who like myself values family,” Priyanka added. “If you don’t know we’re the only couple (in the Jonas family) who doesn’t have kids yet, which is why I’m excited to make this announcement – sorry babe – Nick and I are expecting… to get drunk tonight and sleep in tomorrow!”

She then joked, “Your face was really funny when I said that,” prompting her husband to respond, “I was a bit concerned.”

Other highlights from the roast included John Legend serenading the Jonas Brothers with a song titled “Not Quite the Beatles” and Davidson getting personal about Joe Jonas and Sophie Turner’s love life.

He quipped, “A Little Bit Longer is both my favorite album and it’s what Sophie wishes Joe’s penis was,” and then borrowing the most famous promotional line from the actress’ hit TV series “Game of Thrones“, he said, “Winter is coming but Sophie not so much.”

The racy special follows rumors Priyanka and Nick had split, after “The White Tiger” actress retooled her social media accounts to read simply “Priyanka” last week (ends November 19). She quickly set the record straight and assured her followers the reports were fake news with a lusty comment on a Twitter snap of her man holding some heavy weights on Monday, writing, “Damn! I just died in your arms,” alongside heart and panting emojis.