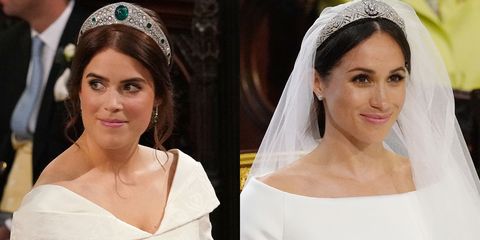 When Princess Eugenie walked down the aisle to marry Jack Brooksbank this morning, she chose a wedding tiara that was similar in style to the one worn by Meghan Markle, now Duchess of Sussex, for her marriage to Prince Harry in May.

Both diamond and platinum headpieces are in the bandeau style, though Eugenie’s, the Greville Emerald Kokoshnik Tiara, is decorated with with six emeralds on either side. Created by Boucheron in the Russian imperial ‘kokoshnik’ style for society host Margaret Greville in 1919, the tiara was the bride’s ‘something borrowed’ as it was on loan from the Queen. Greville left the tiara to the Queen when she died in 1947.

In turn, Meghan wore Queen Mary’s Diamond Bandeau tiara, also on loan from the Queen. Her headpiece was made 13 years later, but boasted a detachable center brooch that was given to Princess Victoria Mary of Teck (later Queen Mary) when she wed the then Duke of York (later King George V) in 1893. Mary had the bandeau tiara commissioned in 1932 specifically to accommodate the brooch. She left the tiara to her granddaughter, Queen Elizabeth, when she died in 1953.

Eugenie’s hair was also styled similarly to Meghan’s, in an up-do with a center part and some volume behind the tiara. She completed her wedding jewelry with a pair of diamond and emerald drop earrings, a wedding gift from the groom.

Eugenie broke from tradition in choosing not to wear a veil with her Peter Pilotto gown as she arrived for the ceremony, allowing guests and well-wishers to see the tiara clearly as she arrived.

The bride had initially been expected to wear the York tiara, the same headpiece worn by her mother on her wedding day. But like Meghan and Kate before her, she was loaned a piece that has not been worn recently by other royals.

The Duchess of Cambridge wore the Cartier Halo Scroll tiara down the aisle to wed Prince William, which George VI commissioned from Cartier for his wife in 1936, and was later a favorite of Princess Diana. Princess Diana broke from tradition, however, choosing to wear an heirloom from her family—the Spencer Tiara— instead of one of the Queen’s tiaras.