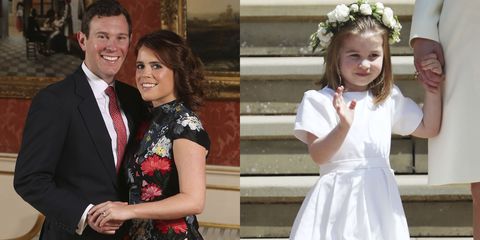 Princess Eugenie is including the children of her cousin Prince William in her upcoming wedding ceremony in a special way. The royal bride-to-be has selected Princess Charlotte, 3, to be bridesmaid and Prince George, 5, to be a page boy for her nuptials to Jack Brooksbank on Friday, the Palace announced.

This will mark Charlotte’s third time being a bridesmaid after serving the role in the Meghan Markle, Pippa Middleton, and her godmother Sophie Carter’s weddings. This will be George’s third time as a page boy, too.

If you saw the royal wedding in May or the Middleton-Matthews wedding last year, you already know that George and Charlotte are basically the highlights of the ceremony. As far as we know, their baby brother Prince Louis doesn’t have a role in the big day (he’s almost six months old), but it’s possible he’ll make an appearance with the rest of the family.

It’s typical for British weddings to include children in the bridal party instead of adults. “In Britain, the bride goes down the aisle first, followed by attendants or bridesmaids and page boys holding the train,” royal expert Marlene Koenig previously told BAZAAR.com.

Next post TMZ Live: Kim Kardashian West Back To Bling After Robbery