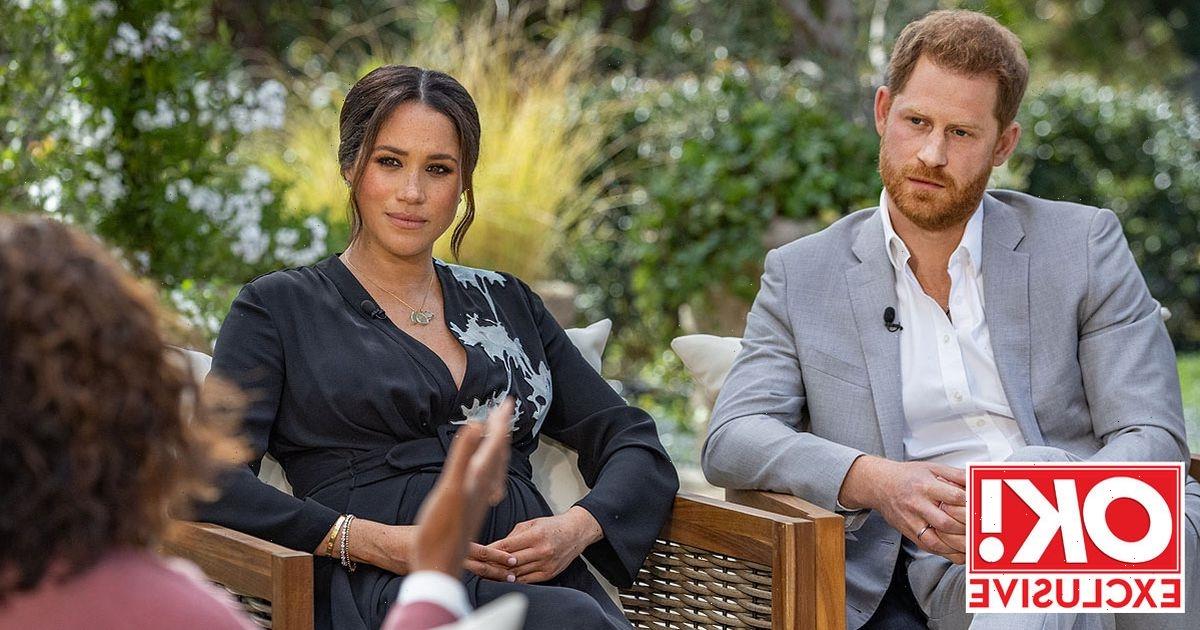 Prince Harry and Meghan Markle have been shown in a completely “new light” in fascinating new snaps released today, according to body language expert Judi James.

The Duke and Duchess of Sussex have featured in their first major photoshoot in months, in a series of images showing them strolling through the grounds of their Californian mansion.

The royal couple have been styled in high-powered business attire and the sage green and grey shades match perfectly for the Time 100 cover.

In the series, Harry and Meghan always stand next to each other, but Judi has dug deeper into their body language to discover potential hints at the prince’s “passive” attitude towards his wife and her undeniable “confidence”.

In an exclusive with OK! expert Judi, who has analysed body language details for all the royals as well as an array of celebrities over the years, she deduced: “These City Slicker poses present Harry and Meghan as a corporate-looking power couple, with the power firmly in Meghan’s lap as she stands to the front of both poses, using a leg splay in one that would suggest confidence and authority.

“Harry looks happy to hold her shoulder and stand slightly behind Meghan, looking supportive and slightly in awe of her talent.”

The leading communication star went on to say that the couple’s choice of poses for the photoshoots also show them in a “new light” that could be depicting them as presidential.

Judi also said that the Duke and Duchess are a far cry from their “normal guru or free-wheeling” royal selves, as are the outfits they’re wearing, which also include an all-white ensemble from Meghan.

In one picture, the couple stand in front of a stone framed window with the stunning beauty of their natural garden behind them.

While their gaze faces outward, Meghan opts to put one arm across her chest and the other casually leaning up towards her chin, as though she’s deep in thought.

“Meghan’s partial arm barrier with one arm across her waist and the other hand raised to her face is a classic pose of intellectual thought and evaluation,” Judi explained, while the other shot shows Harry as having a more “passive” role in his wife’s life.

“[While] his hands in his pockets in one pose suggest it’s Meghan who is the spokesperson and in the second pose he clutches her shoulder like a supporter.”

The new shoot is paired with Harry and Meghan being chosen as one of the covers for Time magazine’s 100 most influential people in the world.

The highly-anticipated annual series showcases some of the richest and most important figures in Hollywood and the world.

The Duke and Duchess are pictured alongside the likes of iconic country music star Dolly Parton and Naomi Osaka.

It comes as rumours continue to swirl that Harry and Meghan will be returning to the UK in the coming months to get their daughter Lilibet christened.