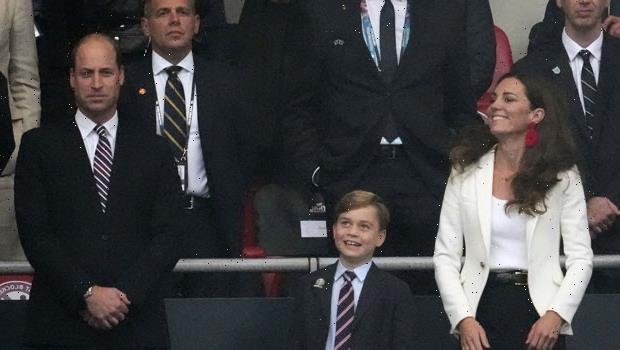 Prince George was over the moon when Luke Shaw scored a goal just 2 minutes into the game against Italy!

Prince George, 7, couldn’t contain his excitement during the Euro 2020 final! England and Italy faced off in the epic match held at Wembley on July 11, and just two minutes into the game, Luke Shaw scored a historically quick goal. George was beaming with excitement during the moment as he stood and clapped alongside an equally as excited Prince William and Kate Middleton. Taken a back, he looked up as dad clearly ecstatic as the entire stadium roared!

The moment was so adorable, it quickly went viral on social media! George was formally dressed for the game just like his dad, twinning in suits and striped ties. The young prince opted for a baby blue colored shirt, while his dad went with a classic white. Meanwhile, Kate sported a white t-shirt underneath a cream colored blazer with gold buttons. At one point, the Duchess of Cambridge appeared to be adjusting her earring — which were red for the team’s colors. 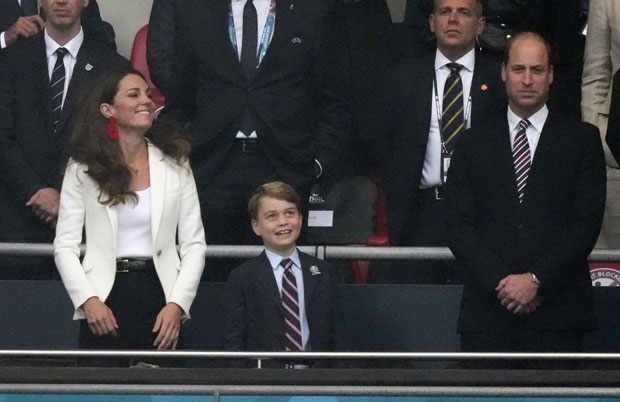 Earlier in the week, there was discussion around Prince George’s wardrobe choice for the game — with speculation that his dad, who is the president of the Football Association, wanted him to wear a team shirt. French tennis star Marion Bartoli later shared details of the debate after having tea with Kate. 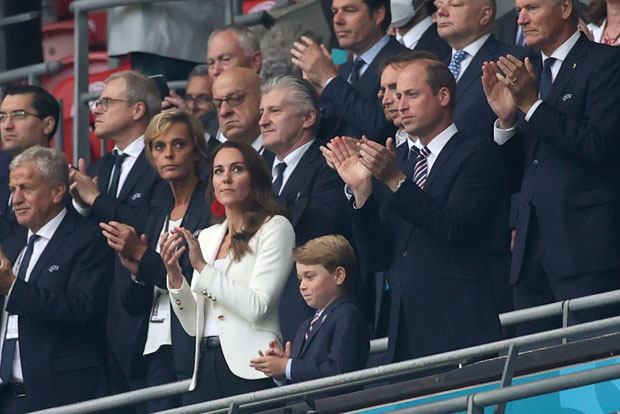 “Yesterday I had an afternoon tea with the duchess and it was very much a discussion whether George will be allowed to wear the jersey tonight at Wembley or not,” she said on BBC Radio 5 Live days before the game. “William was for it, Kate not so keen, so we’ll see,” she added.

George has previously rocked a Team England jersey, notably in a 2019 birthday portrait shared to the Duke and Duchess’ official Instagram account. Earlier in the week, he also wore a suit to a game — rocking, however, a team tie. During the game, William, Kate and George were seen singing “God Dave the Queen” ahead of kick-off, sitting alongside stars like David Beckham, Ed Sheeran and Ellie Goulding in a box.