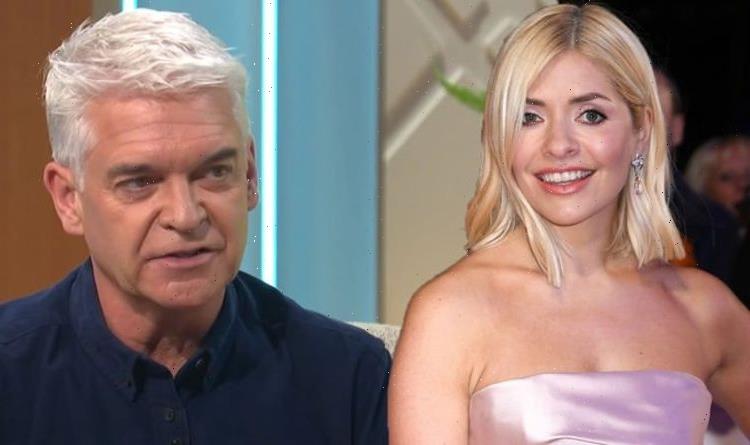 This Morning presenter Phillip Schofield frequently uses social media to share an insight into his life away from the cameras. Now, the broadcaster has taken to Twitter to end any rumours surrounding the “suspension” of his co-star’s account.

Phillip, 59, and Holly Willougbhy, 40, often delight fans with their close friendship having worked together on the popular mid-morning programme since 2009.

Since becoming colleagues, the pair have also become the best of friends, often sharing family holidays together and being caught in fits of laughter on the ITV set.

While they front This Morning on a daily basis, Phillip and Holly have been enjoying the summer holidays with their children, with fellow hosts Eamonn Holmes and Ruth Langsford taking the hot seat.

However, as the summer holidays draw to a close, Phillip has taken to social media to reveal that the pair will once again be in the homes of the nation.

Taking to his Instagram account where he boasts an impressive 3.1 million followers, Phillip shared a promotional ITV trailer featuring an array of some of the network’s most popular programmes, including This Morning and Good Morning Britain.

Captioning his post, he penned: “Back soon @thismorning @hollywilloughby” alongside two smiling emojis.

Phillip also shared the post with his 4.4 million Twitter followers who appeared to be overjoyed by the news.

However, one fan was left concerned after clicking on “Holly’s Twitter” handle to see that it had been “suspended”.

The fan shared a screenshot of the page @HollyWilloughby, which read: “Account suspended.”

However, Phillip was quick to reassure fans that all was not as it seems after noticing the blunder.

Moments later, he responded to his follower saying: “That’s because the clip was forwarded from Instagram where she uses that @… @hollywills on here.”

Meanwhile, hundreds of other fans couldn’t contain their joy after hearing that Phillip and Holly will soon be returning.

“Looking forward to you & Holly being back on our screens,” penned one.

While a second added: “Cannot wait to see you both again. Missed you.”

Before a third quipped: “I have stopped watching since you and H [Holly] went on holiday.”

Phillip’s update comes just days after it emerged that he has again missed out on being shortlisted for this year’s National Television Awards, that will air on TV next month.

For the past three years running, Phillip has been nominated for Best TV Presenter at the annual event.

Holly has been given a nod for Best TV Presenter. She has been nominated every year since 2018.