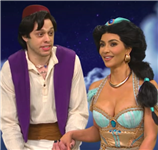 Pete Davidson and Kim Kardashian aren’t even trying to hide it at this point.

Much to Kanye West’s chagrin, we’re sure.

For the third time in just a few weeks, the comedian and the Instagram influencer were spotted out, about… and very affectionate with one another.

As we’re certain you’ve read about by now, Davidson and Kardashian first held hands in public on a roller coaster ride toward the end of October.

A very short while later, Davidson and Kardashian allegedly dined together in Staten Island, with the former treated the large-breasted latter to a romantic, private meal.

Now, according to TMZ and Page Six?

During one outing, Kim and Pete had their own rooftop table.

During the other outing, Davidson called ahead and gave the establishment his credit cad in order to ensure he was paying for the whole evening.

The stars were also acting “very comfortable” with each other, says a TMZ insider.

“Pete really likes that Kim is sexy, confident and her own person. Pete loves that she gets his sense of humor,” a source recently told Hollywood Life, adding:

It probably helps that Davidson reportedly has a big penis.

It simply has to be mentioned, doesn’t it?

Kardashian, of course, filed to divorce Kanye West in February after seven years of marriage.

The two have remained on very amicable terms in the ensuing several months, with West making some unexpected comments on Friday on Revolt TV’s “Drink Champs” program.

“She’s still my wife,” Kanye somehow said on air, adding that “ain’t no paperwork” been presented to him, citing, we presume, divorce papers.

As far as we know, however, Kanye wasn’t merely served these documents this past winter — he went ahead and officially responded to them in April by asking for joint custody of his four kids.

West — who has been known to say some factually incorrect stuff! — went on to say he isn’t divorced. And doesn’t want to be divorced.

“My kids want their parents to stay together,” he added.

“I want us to be together.”

Kim doesn’t feel the same way, though, it appears.

West went on to allege late last week that the Kardashians want “the media” wants to “promote” a different narrative about what’s happening between him and his estranged spouse.

“[There] are people all around in my [wife’s] ear,” West claimed on Friday as the Davidson romance rumors continue to swirl around the Internet and social media.

“This is a publicist that’s next to her.