The last time I saw this play I was in it at school. A good friend, who has gone on to become a successful actor, was strangled by the Crown Prince of Lesotho (now the king). I had to settle for third villager.

Even so, the experience left me unusually curious to find out what Tony Kushner had done with this weird and deeply sinister drama, here starring Lesley Manville as a billionairess returning to exact revenge in the small town where she grew up.

Hugo Weaving, from The Matrix and The Lord Of The Rings, plays Manville’s former lover in the play, written in 1956 by the Swiss playwright Friedrich Durrenmatt. It’s usually understood to be about moral reparations after World War II. But Kushner, best known for his eight-hour AIDS epic Angels In America, has turned it into an examination of the post-war U.S., selling its soul to the devil via debt-based consumerism. 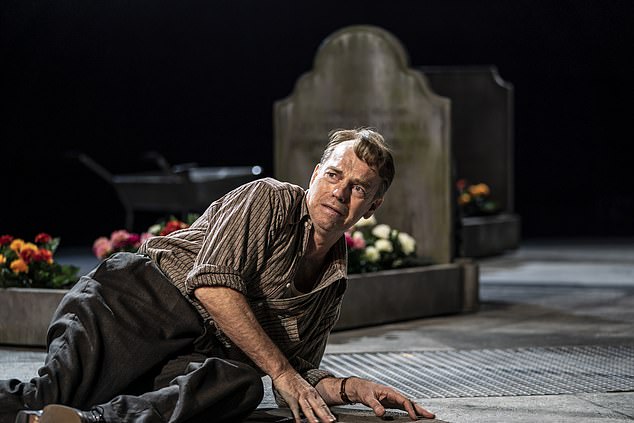 Hugo Weaving, (pictured)  from The Matrix and The Lord Of The Rings, plays Manville’s former lover in the play

Kushner loves the sound of his own voice and, to be fair, I quite like it, too. Which is lucky, as he’s added more than an hour and a half to Durrenmatt’s two hours, shoehorning in meditations on suffering, sexuality, money, justice, religion, progress and more. In some ways it’s a miracle it’s only three hours and 40 minutes long (luckily there are two intervals).

But there is some really meaty writing, with Manville’s diva firing off deliciously cruel one-liners. ‘You look like you swallowed a hat box’ was one of my favourites. However, you need to be very much wide awake and up for something deep and meaningful. Nod off and you’re lost.

My tip would be to focus on Manville’s bone-chilling turn as Claire Zachanassian. A veteran of a Hamburg whorehouse, she’s a terrifying, seven-times-married mix of Mae West and Bette Davis, saved by a rich industrialist. 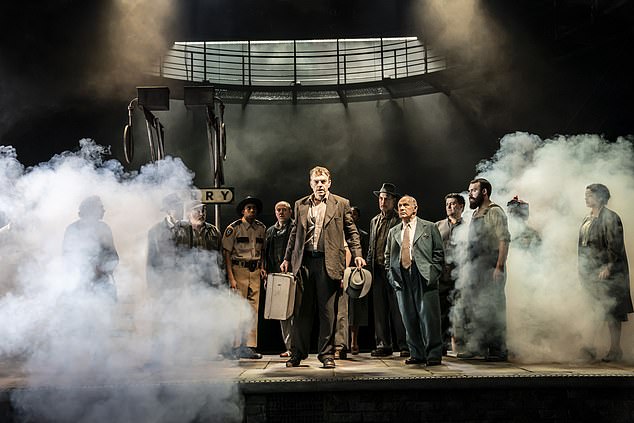 So, in the end, it’s as I remember from school: a sinister concoction that our headmaster darkly judged to be ‘great fun’

She drops in to mess with the heads of the depressed (fictional) Rust Belt town of Slurry, New York. Here, even the undertaker has gone under. She offers the townsfolk $1 billion…on the condition that someone kills the lover who sold her out in court.

As that doomed man, who runs a struggling general store, Weaving is fascinating, although he has almost too much personality to play such a powerless victim.

Big and out of shape, his character looks more like Harvey Weinstein (the disgraced version) — he’s a derelict and pathetic figure. His job is to suck it up — which is probably why Jeremy Herrin cast a major-league actor. He brings a cart-load of charisma, and makes for a bigger sacrificial ox.

Otherwise, Herrin’s enormous production — with a cast of nearly 30 — is an epic full of portents. Four sexy pallbearers in black lace march across, above and around the stage. Two of Manville’s blinded accusers form a cackling vaudeville double act. Her brace of beefcake henchmen strum guitar and sing, menacingly, at Weaving. And the gutted carcass of a cow dangles from the ceiling.

With a soundtrack of smoky cocktail bar jazz played live, Vicki Mortimer’s set has the atmosphere of a 1950s film noir, emphasising the way that Manville has rigged fate against Weaving and the not-so-good people of Slurry.

So, in the end, it’s as I remember from school: a sinister concoction that our headmaster darkly judged to be ‘great fun’.

Swept up by Stoppard’s Viennese whirl

Shakespeare in Love writer Tom Stoppard is best known for his fizzing wit, but his new play is a far more sombre affair. It’s a semi-autobiographical tale charting the life of an extended Jewish family in Vienna’s Leopoldstadt district.

It runs from the quarter’s heyday as a cultural melting pot in the early 1900s, through to the annexation of Austria in 1938, and the Holocaust that saw two-thirds of its Jewish population flee before the rest were deported to Nazi death camps.

There’s little we don’t, or shouldn’t, already know in Stoppard’s account of the period. However, the value lies not in its novelty but in its standing as a memorial to the dead, and a reconstruction of their dignity. 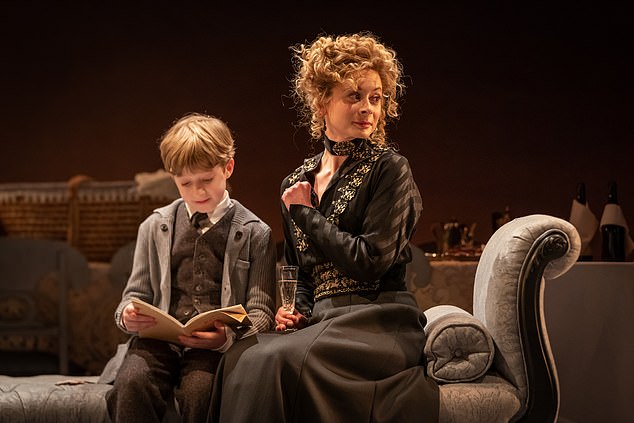 Catholic beauty Greta (Faye Castelow) (pictured with Ramsey Robertson as Young Jacob), who is having an affair with Fritz, a devilishly dashing officer in the Austrian army

The stand-out characters are Adrian Scarborough as the businessman who marries Catholic beauty Greta (Faye Castelow), who is having an affair with Fritz, a devilishly dashing officer in the Austrian army (Luke Thallon). Covering 55 years in two and a half hours can be bewildering. But the myriad character sketches create a vivid, epic sweep. They include Caroline Gruber as the grand matriarch and keeper of traditions, Emilia; and Tom’s son Ed Stoppard, as brilliant mathematician Ludwig.

Thanks to the author’s love of complex ideas, we are also treated to digressions on the geometry of cat’s cradles, and debates about the politics of a Jewish homeland versus the joys of cultural assimilation.

Yes, the characters can feel like mouthpieces, but Scarborough as warm patriarch Hermann weaves together oration, exposition and emotion to create a canny, gentle and stoical old man. And there is plenty of humour — gags fly like champagne corks at a bar mitzvah. The best of these is when a Doctor of Law drops in during a circumcision and asks for a cigar cutter, before adding, ‘Or I could use my teeth?’

The only shame, on the evening I saw it, was the laughter that greeted the Tom Stoppard character, Leo, when he spoke of his pride at being British. Metropolitan sceptics should remember the Brits were the first to take arms against Hitler, and the architects of the Kindertransport that saved 10,000 children.

Although the Holocaust casts a long shadow over it, Patrick Marber’s production teems with life and, indeed, children. It turns out to be surprisingly joyful, and rests on the love of the characters.

The ending fairly takes the wind out of you as the fate of those characters is recalled in 1955. But it’s Stoppard’s fondness for the living and the dead that abides.

There are times when you ask yourself: am I mad, or is everyone else?

When I found that there were critics who admired and even enjoyed this production of Caryl Churchill’s play, I put to myself that question.

And the answer, dear reader, is that it’s the (other) critics who are nuts.

Plus, clearly, the playwright.

What is the play about, then? I wish I could tell you. 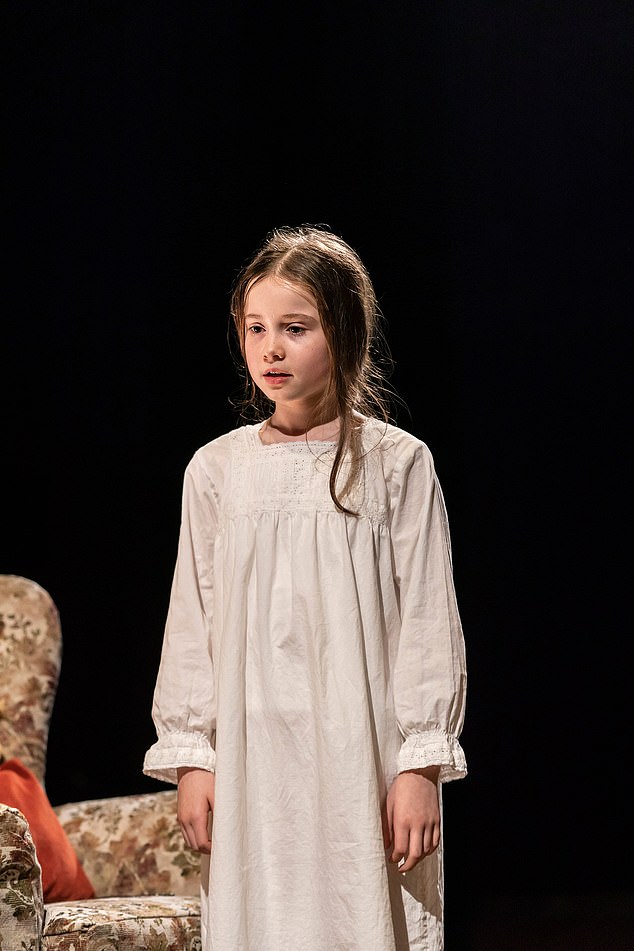 A little girl, Joan — an excellent Sophia Ally (pictured) — observing that her uncle is up to no good in the backyard

But I honestly don’t know. The first of three interconnected scenes involves a little girl, Joan — an excellent Sophia Ally — observing that her uncle is up to no good in the backyard.

He’s making people scream in a lorry, and beating others in a shed.

Is he a people trafficker, a genocidal butcher — the play dates from 2000 — or a psychopath who preys on refugees?

We await the big reveal, or at least some clue about where this is going.

But we don’t get it.

Next we see Joan, now grown up and played by Aisling Loftus, making the kind of absurdist hats you get at Ascot’s Ladies Day.

Except, disturbingly, that they’re made for prisoners to wear at a grim parody of an Easter Bonnet parade.

Plainly, this is a metaphor. But of what? Industrialisation?

Concentration camps? Millinery in the service of the overlords?

There is no discernible link, other than the characters, between this and the final scene, where everyone has finally lost it.

Harper is saying phrases like: ‘Mallards are not a good waterbird. They commit rape, and they’re on the side of the elephants and the Koreans.’

This is an author who has lost the plot in both senses.

The only thing this play has going for it is that it lasts for 45 minutes.

This is a frenetic, boozy, sweary — and fantastically watchable — 90-minute one-man play. I avoid saying ‘monologue’, because in my mind’s eye that conjures up the spectre of a flat, deeply undramatic speech. Some kind of seated story time, quite possibly delivered from a stool.

Whereas this couldn’t be more agile. Rafe Spall appears suddenly, with a jolt. He’s wearing a tight white T-shirt, a thick gold watch, and dropping his aitches — and the c-word.

The story is ostensibly one of manhood in the face of grief. What does a 30-something-year-old, who has spent his entire life measuring his worth against the expectations and example of a complicated father, do when the old man keels over and dies in a pub? 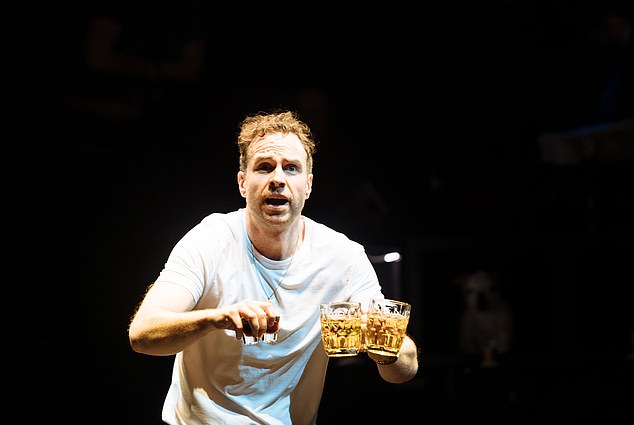 Rafe Spall (pictured as Michael) appears suddenly, with a jolt. He’s wearing a tight white T-shirt, a thick gold watch, and dropping his aitches — and the c-word.

Get smashed and deliver some home truths at the funeral, is what.

The set is a large, bare walkway in the shape of a cross, which Spall marches all over. Props surround us, in little, advent-style boxes. Slowly they’re plundered, and the stage fills.

The show has a giddy cartoon vibe. Pints are pulled out of nowhere, and when we finally see a coffin, it bursts into flames.

Playwrights Roy Williams and Clint Dyer nail the examination of what it means to be male. Michael, played by Spall, is a brash cockney. He’s desperately weepy and emotionally available, but also drunk and bolshie, funny, frantic and chatty. Lines are spat out at semi-automatic speed, with great laddish gestures, but moist fragile eyes.

Spall is a marvel, holding the room in awe.

He takes us from childhood to funeral fallout and slowly a portrait of the dad emerges: a strange blend of cheap racism and repressed love. Clumsily, the play reaches for some kind of state-of-the-nation political relevance, with cheap shots at the EU referendum, which actually illuminate very little.

But for a one-man tour-de-force you couldn’t get much better.