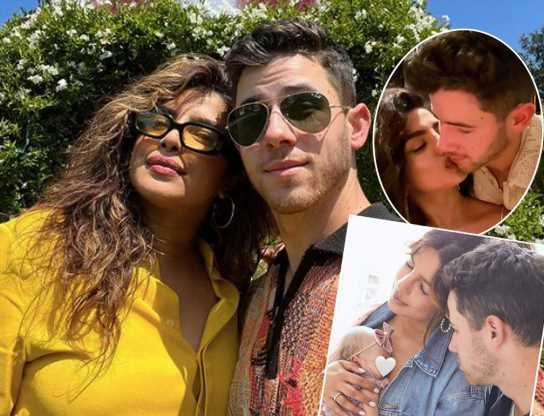 Nick Jonas is getting candid about his parenting journey alongside wife Priyanka Chopra.

If you’ve been following their story, Nick and Priyanka revealed on Instagram last month that their daughter Malti had spent a great deal of time in the hospital following her birth via surrogate in January. They explained at the time:

“After 100 plus days in the NICU, our little girl is finally home.”

For those who don’t know, the NICU is the Neonatal Intensive Care Unit, which provides care for premature and sick newborns. What a scary thing for new parents to go through! We’re just happy they finally got to bring their baby girl home.

The 29-year-old singer sat down with People on Wednesday to provide new insight into how he has been managing the daddy/husband role, particularly in the wake of his daughter’s ongoing health scares. On why the celebrity couple decided to share their story on Instagram, Jonas explained:

“It was really important that people know that whatever their journey is or whatever challenges might come up, you’re not alone, the power of social media is that it connects us all and makes this very big world a little bit smaller.”

We know that Nick himself has struggled with his own health issues ever since his type-1 diabetes diagnosis at age 13, so seeking community may just be the comfort he needs! That is of course in addition to the comfort he received from Priyanka herself! He gushed about his wife’s role throughout the stressful period:

“Was a rock the whole time and continues to be, I’m grateful to have a teammate in Pri.”

We love that! It really sounds like she has been holding it down for her man.

The pair first began their relationship back in early 2018 and then hit the fast track to marriage tying the knot later that same year in December! So fast! On the topic of his and Pri’s accelerated relationship timeline, the young musician explained:

“I felt a kind of peace in my spirit about it all that I had not felt before, I just tried to follow that, and as I continued to follow it, it led me to some pretty big milestones, which were engagement and marriage within six months. It all worked out and is wonderful.”

Well when you put it like that, Mr. Jonas, it’s hard to not be on board! We just love that he sees so much stability in Pri.

As for the wedding itself, you probably heard they had both Hindu and Christian ceremonies to honor their families’ different religious traditions. That partnership is continuing as they raise their daughter; Nick explained:

“I’m excited to pass that on, it’s really important to us that our daughter has an upbringing that is representative of our family and the things we love about Indian culture and my American culture.”

We’re so happy that Nick and Pri have finally been able to spend time with their daughter — and it sounds like they have big plans as parents!

What do you think about Nick and Priyanka’s relationship and journey as parents, Perezcious readers? Let us know in the comments below!