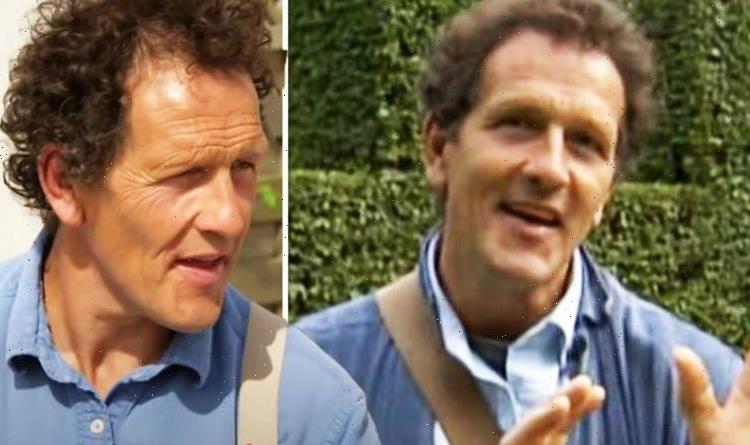 Monty Don shares tips for planting garlic in the Autumn

Gardeners’ World presenter Monty Don has taken to Twitter to give an insight into the filming schedule of the popular BBC gardening programme amid confusion from the show’s fans. After Monty, 66, revealed what he had been up to in his garden recently, a fan was left wondering whether his winter efforts would be broadcast on the show when it starts up again in Spring, before the star helpfully clarified the matter.

Everything shot the week before transmission

In view of his 244,300 followers, the horticulturalist told his fans what he had been up to in his Longmeadow garden now the show is off-air over the Winter months.

Monty wrote: “Despite a few days filthy weather, We have managed to widen the orchard beds ready for substantial replanting- which I will share with you when GW starts again in Spring.” (sic)

The star shared a snap of his orchard where the boundaries of the new beds could be clearly seen.

However, following the picture, one Gardeners’ World fan was left wondering if any of Monty’s work during winter was filmed and saved for when the show comes back next year.

Martin White wrote: “Do you ever film anything over winter to show in the spring?

“Or is everything at Longmeadow shot pretty much at the same time?” he added.

Wanting to clarify the matter, Monty helpfully took to the comments to reply.

“Everything shot the week before transmission,” he wrote.

“The production closes down completely over winter and starts again afresh in February,” he ended.

Just days before, Monty was inundated with support after he unearthed an old photo of his dog, Nigel.

The golden retriever regularly appeared on the BBC show and was a favourite with fans.

Tragically, Nigel died in May 2020 following violent seizures, but Monty still posts throwback snaps of him on social media.

Monty has now reflected on his sad loss by sharing an old photograph of Nigel and his Yorkshire terrier Patti.

The dogs can be seen happily running down a garden path as Patti gazes at Nigel adoringly.

Monty told his followers that the picture was taken just a week or two before Nigel died.

Almost 88,000 Instagram users have liked the post and hundreds have shared their words of love and support.

Monty and his wife Sarah moved to Longmeadow, in Herefordshire, the West Midlands, four years after the stock market crash.

When they bought the property, it featured a two-acre abandoned field and just one tree.

Over the years, Monty has established his famous Jewel garden, as well as a Cottage garden, Spring garden and Fruit garden, among others.

In 2003 Monty was announced as the lead presenter of Gardeners’ World which has been filmed from his garden for the last decade.