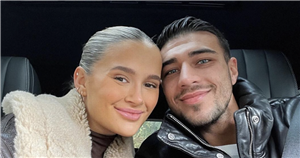 Mum-to-be Molly-Mae Hague has been excitedly sharing her pregnancy journey with her followers after announcing that she was expecting her first child with Tommy Fury. In September the former Love Island star shared a romantic black and white video to tell their joyous news.

On October 31 Molly-Mae, 23, explained to fans why she had been 'inactive' on social media as she got stuck into a Halloween movie marathon.

"Been inative on here today but I hope you've all had a good Halloween," she wrote on her Instagram Stories as she shared snaps and video from their plush home as she watched TV. The Love Island star added: "Mine consisted of work all day whilst playing horror films in the background then an evening drive followed by more horror films." The reality TV favourite also told her fans as she embraced the season: "One of the best days of the year comes to an end."

She also posted a cuddly snap of herself and Tommy cuddled-up together in the car. She looked stunning with her hair slicked back, sporting a fleecy aviator jacket and her man warded off the autumnal chill in a cosy black jacket.

Molly-Mae pointed out that this will be their last Halloween as a couple before they become a family. "Happy Halloween everyone. Our favourite day of the year and our last as just the two of us," she captioned the smiley snap. Tommy, also 23, replied with a stream of pumpkin emojis.

One fan told her: "Happy Halloween! Next year you will have the cutest baby pumpkin with you." Tanyasilcock said: "Love this." And another commented: "Wholesome pumpkins."

A month ago Molly-Mae shared the news that they're having a girl with a heart-warming video of their gender reveal. She stood alongside a balloon that had the words 'Boy or Girl?' written on it in gold writing.

From behind the camera Tommy could be seen holding a pin before going over to join his girlfriend for the big reveal. Before popping the balloon, they shared a warm embrace as they prepared for the news.

Tommy then popped the balloon to release a shower of pink confetti. "A little princess on the way xxxx" cheered Paris Fury.