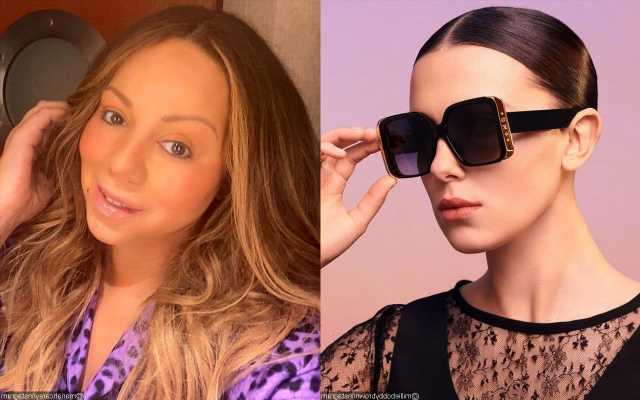 The 18-year-old actress, who’s known for her role as Eleven on the hit Netflix show, teases potential collaboration with the chart-topping singer and addresses some theories surrounding the sci-fi series.

AceShowbiz –Millie Bobby Brown has gotten candid with her fans. The 18-year-old star has responded to rumors about a potential collaboration with Mariah Carey and viral fan theories surrounding “Stranger Things“.

When making an appearance on “The Tonight Show Starring Jimmy Fallon“, the “Enola Holmes” star teased a potential collaboration with the Grammy winner. She also revealed that she shares an unlikely friendship with the chart-topping singer.

Millie told host Jimmy Fallon that Mariah’s children are fans of Eleven, her character on “Stranger Things”, prompting her to meet them. After developing a close bond with 11-year-old twins Morocco and Monroe, whom Mariah shares with ex-husband Nick Cannon, the actress explained what she and the singer get up to during her visits.

“I’ll just go over and we’ll sing together,” Millie revealed, adding that the pair even sang in Mariah’s state-of-the-art studio. “We have sung together, yeah,” she added before Jimmy asked if fans could expect a joint collaboration.

In response, Millie coyly said, “Potentially, I don’t know,” before calling Mariah “the most talented singer ever.” Jimmy then reacted, “This is the biggest scoop I’ve ever gotten on ‘The Tonight Show’. I would buy that in two seconds.”

Later, Millie revealed she and Mariah are so close now that she even calls her “Mimi.” Offering more details, the teen said, “We texted today. Yeah, she called me today. The reason is because she grew up in the public eye and we have connected just on so many different levels.”

Millie also gushed over Mariah, who’s her inspiration. “I also just love the way she leads her life with so much power and she just has so much knowledge and she’s so wise. She’s just been such an incredible guiding light for me,” she added.

In a separate interview with Entertainment Tonight, Millie addressed some fan theories surrounding “Stranger Things”. One of which is Eddie Munson (Joseph Quinn), who was killed in season 4, could return as Vecna’s second in command when the beloved sci-fi series returns for season 5. “I mean, it’s a good fan theory,” Millie responded while still remaining tight-lipped about the show’s upcoming season.

While Millie said she hopes the Duffer brothers bring back Papa for the show’s final season, she maintained that she doesn’t know as much about the show’s plotlines as everyone thinks she does. “I really don’t know,” she insisted. “People say, ‘Oh, you can’t say too much, like don’t spoil it.’ I’m like, ‘Oh no, I wish I could spoil it for you, I don’t know anything.’ “