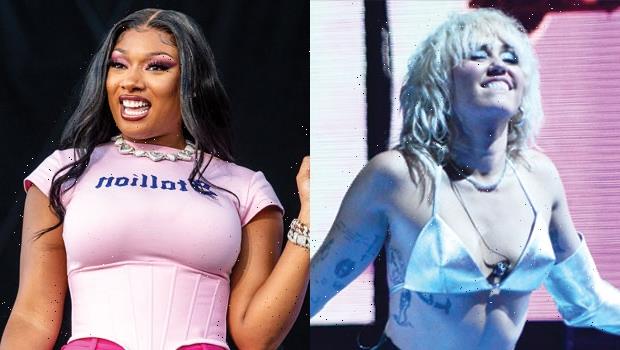 It was a party in Austin, Texas! Miley Cyrus couldn’t help but crash the stage, while Megan Thee Stallion performed for an incredibly sweet and fun moment!

Who says “Hot Girl Summer” can’t last through the fall? Megan Thee Stallion, 26, fans were treated to a surprise appearance by Miley Cyrus, 28, as the Plastic Hearts singer ran out onstage during the rapper’s set at the Austin City Limits music festival on Friday October 1. A fan shot video from backstage showed the “Wrecking Ball” singer sneaking up from backstage to surprise Megan in the middle of her set. Megan looked shocked and excited for the singer to join her, and Miley twerked onstage with the rapper, and the audience cheered them both on!

Both Miley and Megan looked great during the show. Megan rocked hot pink booty shorts with a lighter pink t-shirt for her performance. Miley sported a black crop top with matching capris. The outfit also had multi-colored beads dangling from it for a bit of 60’s hippie feel. She completed her outfit with a small pair of green heels. Miley also channelled a bit of 80’s glam rock with her blonde hair teased up! Miley gave fans a better look at her outfit on Instagram. “Everything’s bigger in Texas including my HAIR!” she captioned the post!

Megan’s set for the event had all the hits you’d expect the rising rapper to perform, including “Savage”, “WAP”, and “Body,” via Setlist.fm. Miley performed later that evening with a headlining set. Both performers have been killing it at music festivals all across the country throughout the summer. The “We Can’t Stop” singer has shown off plenty of different outfits throughout the summer, as she’s taken the stage many times throughout the summer. One of her most popular looks was a silver crop top that she wore for concerts in Atlanta, Georgia and at the Bottlerock music festival in Napa, California. Another a glamorous outfit was a shimmering red romper, which she wore onstage at Chicago’s Lollapalooza festival at the end of July. The singer has also shown off her twerking skills on plenty of occasions, like when she put her dance moves on display at Milwaukee’s Summerfest.