Mike Bushell, 54, will be back at his old stomping ground presenting sport on the BBC Breakfast red sofa as of this morning. After six months away from the studio while he took part in the dancing competition, he admitted he can’t wait to get his “teeth back into sport.”

Next stop @BBCBreakfast after 6 months away

And, the day before his big return, he took to Twitter to share his excitement with his fans.

“Next stop @BBCBreakfast after 6 months away @bbcstrictly I’ll finally be introduced to the new red sofa tomorrow and be lovely to see colleagues again including new boss @BBCFrediani,” he wrote.

“So much sport to get teeth into again.”

His announcement led to an abundance of celebrity pals cheering the star on, looking forward seeing him back on the sofa doing what he loves best.

Among them was last year’s Strictly winner Kelvin Fletcher, who reassured him he would be watching. 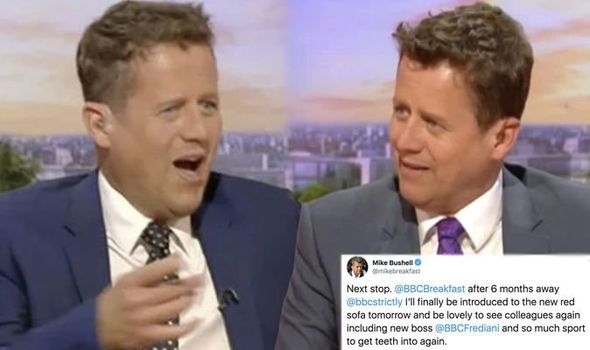 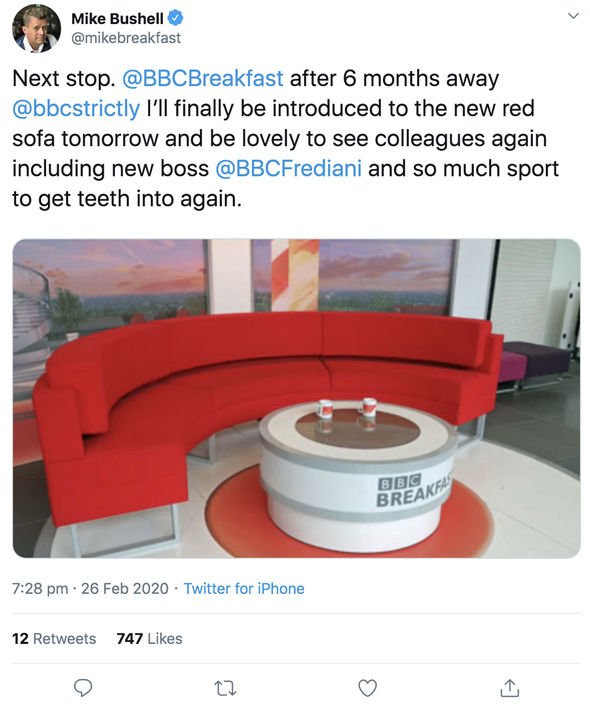 In a separate tweet, Mike replied to a post by the official breakfast show program’s account, that featured the viral video of the presenter falling into the deep end of a pool, taking one step too many while interviewing a swim team.

“Aw @BBCBreakfast family. Can’t wait,” he gushed before mocking himself in the video.

“Hopefully thanks to @bbcstrictly a leaner fitter more aware (around swimming pools) Bushell, even after post Strictly holiday indulgence.” 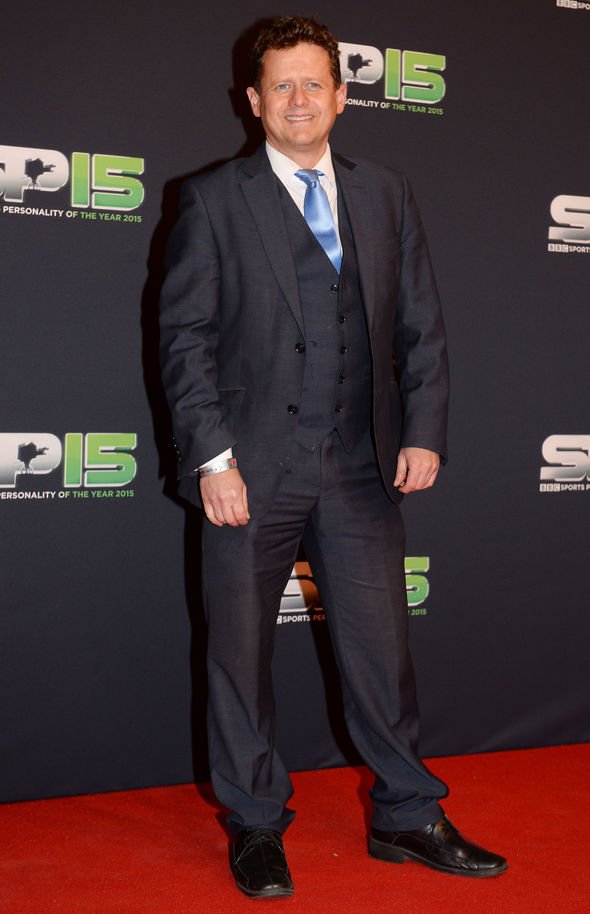 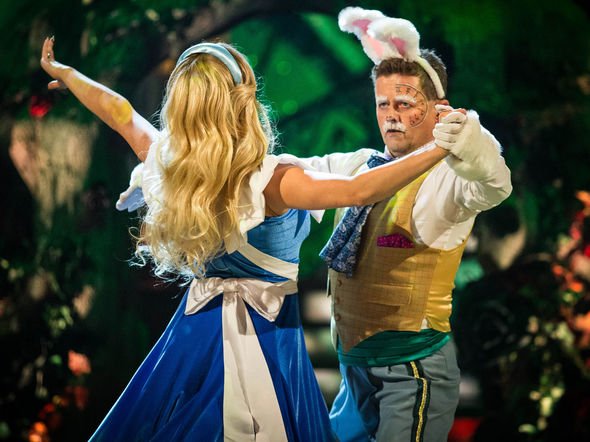 His enthusiasm was felt by fans across the board, who took to the comments section to welcome him back ahead of his return.

“It will be great to see you back again,” one wrote.

Another said: “You’ve been missed lad.”

“You’ll be amazing,” a third reassured.

Well, Mike certainly will have a fair few viewers who will be happy to see him back on the sofa, something we can only assume he will very much appreciate.

The BBC star took a break from his presenting duties late last year, after it was announced he would be joining the Strictly team to try his hand at winning the coverted Glitterball trophy alongside his pro partner Katya Jones.

And, while the 54-year-old won over hearts around the nation with his “dad dancing” and all-over bubbly vibe he brought to the ballroom, he was also targeted by online trolls.

Surviving three dance-offs, he infuriated many viewers as the judges voted to keep him in, sending home celebs fans thought “deserved” to stay in the competition.

Speaking out multiple times about the “shocking and painful” comments he was receiving, even his wife Emily had to address the situation.

She tweeted after Coronation Street star Catherine Tyldesley and her partner Johannes Radebe were sent packing: “Wow the abuse! Painful. We’re beyond gutted Catherine and Johannes have left but Mike danced well and deserves his spot. As a viewer since the start I get opinion but this level of abuse is shocking. He’s just a contestant and giving his all!”

Even judge Craig Revel Horwood spoke out about the controversial decisions, insisting it is the viewers’ fault, telling Heart Breakfast at the time: “We have to judge the dance off only, not what happened previously or what is to become, and you can only judge what you see in that one minute thirty and in my opinion Mike had the cleaner dance.”

Despite the abuse, Mike tried to stay positive as he spoke to BBC Breakfast: “As a non-dancer all I can do is put the hours in, do my best and get through it. You have to rise above the abuse on social media, that’s one of the sad things about social media.

“All you can do is do your best, accept the judges’ decision and move on.”

He was seventh to be eliminated from the show and admitted he was ‘relieved” to be out.

He’ll be glad to be back in his comfort zone after today!