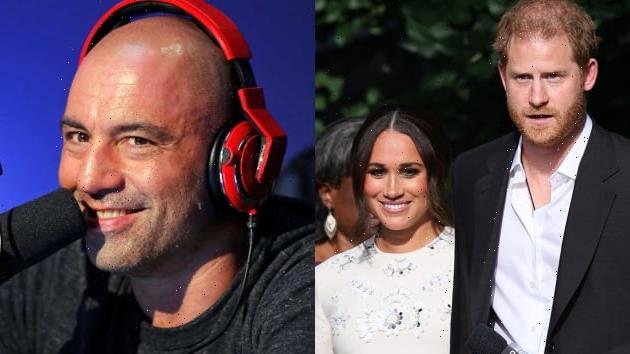 If you’ve been anywhere near social media in the past few days, then you’re no doubt familiar with the latest controversy surrounding the wildly popular music streaming service Spotify.

But in recent months, the host has become an outspoken skeptic of the Covid-19 vaccine, and these days, he tends to favor guests who share his distrust of the government and the pharmaceutical companies who developed the vaccine.

The host and those he’s interviewed have been accused of spreading dangerous misinformation to a massive audience, and now, action is being taken by musicians whose work has helped to make Spotify such a success.

Neil Young, Joni Mitchell and others have requested that their music be removed from the service, with Dave Grohl and many more rumored to be following suit.

And now, Spotify is facing a challenge from perhaps the only other podcasters on the planet who can match Rogan in terms of influence and name recognition.

Prince Harry and Meghan Markle signed a $100 million deal with Spotify back in 2020.

Now, however, the future of this arrangement is in question thanks to the controversy surrounding Rogan’s content.

“Last April, our co-founders began expressing concerns to our partners at Spotify about the all too real consequences of Covid-19 misinformation on its platform,” an Archewell spokesperson said in a statement issued this week.

“We have continued to express our concerns to Spotify to ensure changes to its platform are made to help address this public health crisis.”

The statement did not go into specifics with regard to what sort of action the Sussexes plan to take if Spotify fails to address their concerns.

“We look to Spotify to meet this moment and are committed to continuing our work together as it does,” the spokesperson added.

“Since the inception of Archewell, we have worked to address the real-time global misinformation crisis,” the statement continued.

“Hundreds of millions of people are affected by the serious harms of rampant mis- and disinformation every day.”

Obviously, Harry and Meghan have a great deal of clout as one of the most famous couples in the world.

But they might not have a tremendous amount of sway over Spotify execs.

That’s because the Sussexes have thus far failed to uphold their end of the bargain.

As we reported last week, Harry and Meghan have failed to produce content for the service as planned.

The couple has hosted a star-studded holiday special back in 2020, and at the time, listeners were assured that there would be more podcasts to come.

“While the first complete series from Archewell Audio and Spotify is not expected to debut until 2021, listeners will get a first glimpse at what Archewell Audio has in store before the year ends!” said a Spotify ad released the week before the holiday special aired.

And the Archewell Audio page still features just that one 33-minute episode.

Spotify execs have now taken the matter into their own hands by recruiting outside talent to produce content under the Archewell umbrella.

Compare that to Rogan, who releases several episodes a week, some of them running to four hours in length, and it’s easy to see how the comic might outrank the Duke and Duchess in the eye of the Spotify bosses.

But regardless of whether or not Harry and Meghan take any action on this issue, it’s likely that Spotify will be forced to make a decision very soon regarding Rogan and his future on the platform.

And that decision is likely to have a major impact on the on the ongoing debates surrounding free speech, the internet, and the influence of tech giants on our national discourse.