Megan Fox clarified that she wasn’t trying to show support for Donald Trump during an appearance on ‘Jimmy Kimmel Live.’

Megan Fox, 35, took to her Instagram Stories on Wednesday July 14 to explain what she meant when she spoke about sitting in the same row as former President Donald Trump, 75, at the UFC 264 fight on Saturday July 10. She said that people weren’t paying close enough attention to everything that she said about the ex-president, when she spoke about him on Jimmy Kimmel Live on July 13.  The Till Death actress explained that she prefers not to “align” with any politicians.

Earlier this week, Megan told Arsenio Hall (who was filling in for Jimmy Kimmel) that she had been in Las Vegas for the weekend to enjoy the fight. She told him that Justin Bieber and Trump were seated in the same section as her. The actress was surprised by the secret service, but saw that many people were very excited to see the former president.  “He was a legend. That arena was very supportive of Trump when he came in,” she said, before saying that she was more worried about someone trying to attack him. “I don’t know how I feel about it, because if someone is a target, then I’m like, ‘I could be harmed,’ because I was adjacent to where he is. So, I was worried about my own safety.” 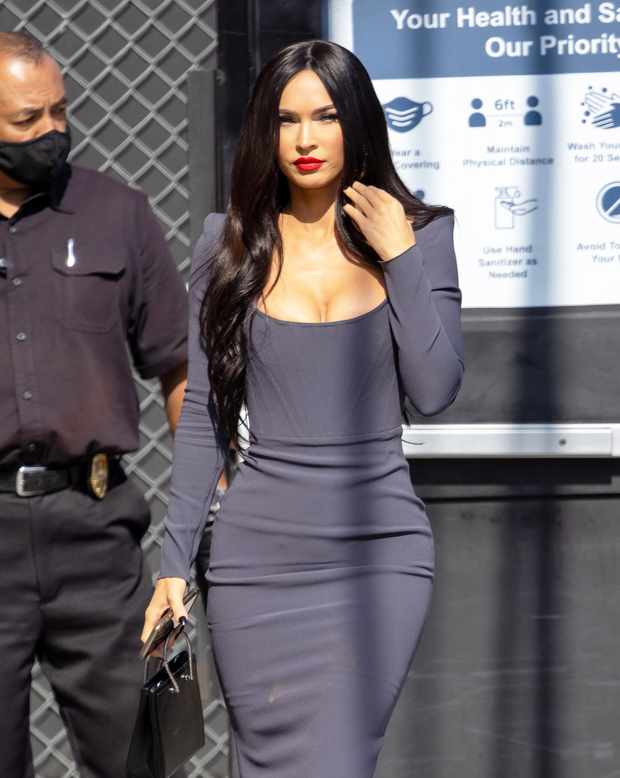 In her Instagram post, she pointed out that she wasn’t trying to show any political opinion in the interview. “I do not align myself with any political party or individual politicians. I never said Donald Trump is a legend. I said he was a legend… in that arena (key part of that sentence). The arena was filled with UFC fight fans. Many of them clearly Republican, based off the insane reaction he received walking into the T-Mobile venue. That was an observable fact. Not my opinion,” she wrote. 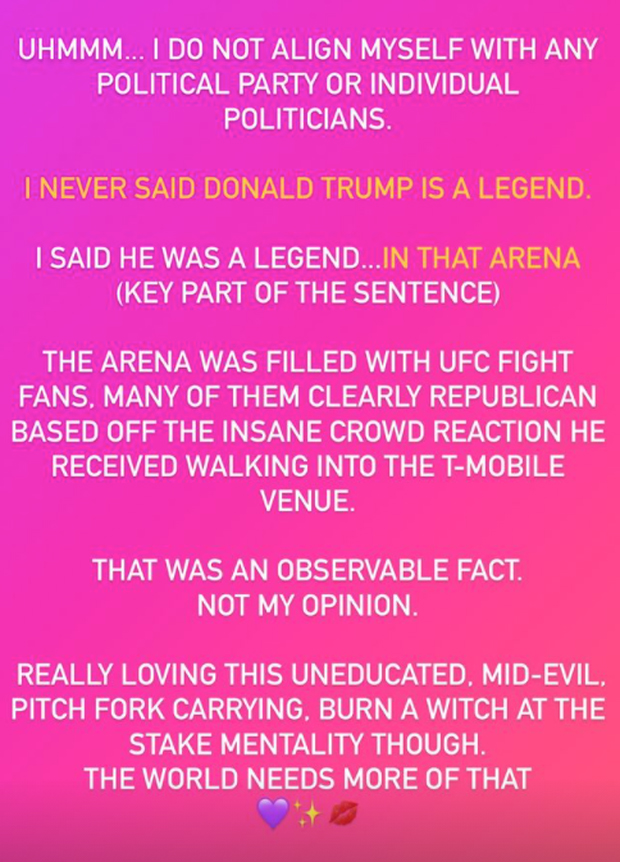 Megan clearly wasn’t having any of the criticisms. Besides defending her “legend” description, Megan sarcastically complimented all the people who came after her for the interview. “Really loving this un-educated, mid-evil [sic], pitch fork carrying, burn a witch at the stake mentality though. The world needs more of that,” she wrote with heart and kissing emojis.

The Instagram clap back is certainly par for the course for Megan. The Transformers star has never shied away from responding to haters. Megan spoke about the people who judge her for dating Machine Gun Kelly, who is four years younger than her, in an InStyle profile. She also called out “mean, awful people and cruel people” who make fun of her eight-year-old son Noah for wearing dresses.