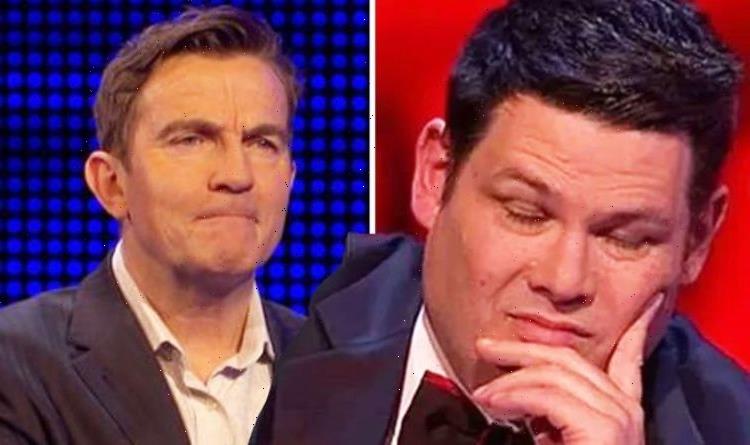 Mark Labbett often goes back and forth with The Chase presenter Bradley Walsh, as they delight viewers with their cheeky on-screen banter. The ITV favourite, who is commonly referred to as The Beast, claimed he is the only quizzer the host can regularly have a “pop at”.

The 55-year-old has lost a phenomenal amount of weight in the past two years, dropping an impressive 10 stone.

Despite shedding the pounds, Mark admitted that this has not stopped his colleague from making cheeky digs.

Addressing his relationship with The Chase host, the quizzer explained that their on-screen chemistry works because he knows that Bradley is in “charge”.

“[Bradley] has a pop at my weight but I haven’t got the heaviest BMI [Body Mass Index] on the show,” Mark claimed.

“If he had a pop at other people on the show for their weight you know people would say, ‘You can’t say that.’

“He calls me fat and makes jokes about me, but I am.”

Despite their banter, Mark has nothing but praise for Bradley and admitted he fears he’s been too “mean” to him at times on the show.

“I know he’s in charge. In my opinion, he is the best gameshow host in the world right now,” he commented.

Mark continued: “Sometimes I worry I’ve been a bit too mean to him but he just loves it when you come back with banter.

“He knows that I’m the ultimate straight guy in that he can have a pop at me over just about anything and nobody is going to get offended on my behalf.”

Mark is an original quizzer on The Chase, after making his show debut in 2009.

Bradley has been on screens for 40 years and has hosted ITV’s iconic game show for more than a decade.

Elsewhere, the quizmaster has addressed plans to front his own show similar to his Chase colleagues.

Anne Hegerty fronts her programme Britain’s Brightest Family and earlier this year, Paul Sinha followed in her footsteps by launching his own offering called TV Showdown.

Mark explained that he would like the opportunity to go solo at some point.

He said: “I would love for ITV to give me the opportunity to host my own show.

“Let’s just say my agent is aware I’d like to do one but unfortunately the right project hasn’t come up yet.”

Mark added: “Two of my colleagues have had their own show. I’m hoping that I’m going to get that luck at some point.”

The Chase airs weekdays on ITV at 5pm.