Mariah Carey, the uncrowned Queen of Christmas, is back with another holiday song! The music icon teamed with Khalid and Kirk Franklin to hope you ‘Fall In Love At Christmas.’ Watch the video.

Halloween is barely in the books and already, music fans are preparing for “the most time of the year.” Helping everyone get into the holiday spirit is the queen of Christmas herself, Mariah Carey. As every radio station and department store prepares to play “All I Want For Christmas Is You,” Mariah, 52, has gifted music fans another addition to their holiday playlist. With a pair of her own Santa’s helpers – R&B vocalist Khalid and gospel icon Kirk Franklin – Mariah unwrapped “Fall In Love At Christmas” on Friday (Nov. 5). And move aside, pumpkin spice: eggnog season is now upon us.

Like “All I Want For Christmas is You,” “Fall in Love at Christmas” is a holiday love ballad. In the chorus, Mariah and Khalid sing, “And every Christmas I’ll be there, this time of year we won’t throw away / We gotta fall in love again at Christmas time / And all the angels in the sky, shine down on us as we roll by / We gotta fall in love again at Christmas time.” The accompanying video is more cozy than an eggnog by the fire, with Mariah and Khalid exchanging vocals and Kirk playing the piano. Mariah’s twins Moroccan and Monroe, both 10, whom she shares with Nick Cannon, also make sweet cameos towards the end.

2021 started off the same way 2020 did: with “All I Want For Christmas Is You” at No. 1 on the Billboard Hot 100. When the song ushered in 2020, it gave Mariah the distinct honor of being the first artist to hold a No. 1 on the Hot 100 in four decades (the ‘90s, ‘00s, ‘10s, and ‘20s.) While artists like Stevie Wonder, Michael Jackson, Elton John, Janet Jackson, Madonna, Christina Aguilera, Britney Spears, and Usher were able to top the Billboard Hot 100 in three separate decades, it was Mariah who decided to go for the four-peat, establishing not only her chart supremacy but her title as Queen of Christmas, with her holiday classic.

In 2020, “All I Want For Christmas Is You” became Mariah’s 19th No. 1, after earning 14 chart-toppers in the 1990s and four in the 2000s. She originally released the song in 1994, and due to rules at the time, it was ineligible for inclusion on the Hot 100. Since then, the rules have changed, and “All I Want” has been the Hot 100’s version of Santa Claus, appearing every December to spread some holiday cheer. It has also has brought Mariah a lot of green. It reportedly earned her more than $60 million in royalties, according to CNBC.

Mariah Carey Through The Years — PICS 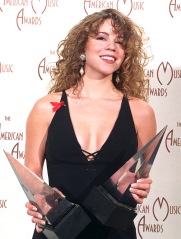 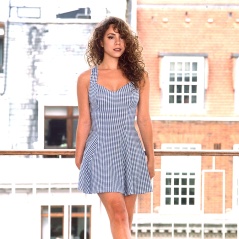 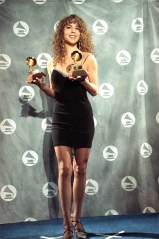 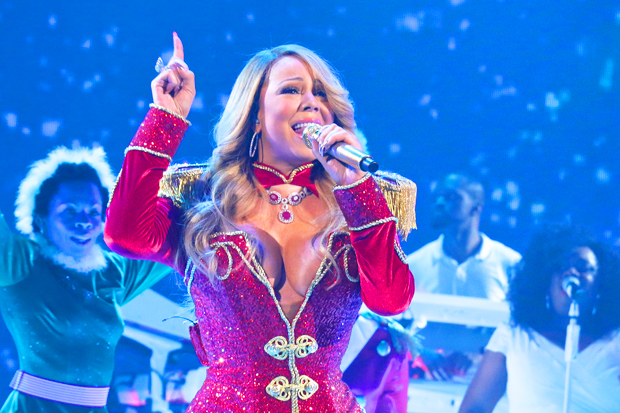 Not everyone is a fan, though. Ahead of the 2021 season, the Stoneleigh P bar in Dallas, Texas, banned the song from being played before Dec. 1, per  Washington Post. A sign on the bar’s jukebox read that the track “will be skipped” if played, and after Dec. 1, the song can only be played “one time a night.” The bar’s general manager said that she did not “hate Mariah Carey and I don’t hate Christmas” but the song gets played too frequently, which takes a toll on the bar’s staff.

In response to this rule, Mariah shared a photo of her dressed in armor and standing amid a raging battle, to signify she’s ready to take up arms in this “War on Christmas.” At the stroke of midnight on Halloween, when it officially became Nov. 1, Mariah also posted a video of her smashing a Jack O’Lantern – her way of telling fans that “it’s time” for Christmas.