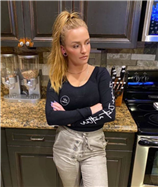 Maci Bookout has a lot on her plate these days.

She has three kids, an obnoxious ex, and a thriving career as a reality star and influencer.

It’s tough to imagine Maci taking on even more responsibility, but in a recent Instagram post, she seemed to indicate that she’s decided to do exactly that.

Often, fans read too much into posts from stars like Maci.

They look for information that’s not there, and when they arrive at a conclusion, they’re often quick to disseminate their findings to the masses, as though they’re confirmed facts.

But in this case, you really can’t blame them for making assumptions.

Maci posted a photo of a sonogram and encouraged fans to click the link in her bio to find out more.

She followed that up with an Instagram Story reading simply, “She’s pregnant?!’

The fact that the face of the person in the photo — who likes a lot like Maci — is blocked out probably clued you into what’s going on here.

Yes, Maci is cashing in on a clickbait deal and pulling out all the stops to redirect her fans toward a story about 16 and Pregnant star Izabella Tovar, who’s due in September.

So congrats to Izabella and all, but Maci did all of this knowing that she was essentially tricking her fans into clicking the link.

Will they be disappointed when they get to the page and realize it has nothing to do with Maci?

Almost certainly! But that time, Maci has already been paid for your click, so she probably doesn’t care how you feel about the article.

Fans are often quick to complain when this sort of thing, but clearly, Maci and others are more worried about the money they’re receiving from the pruveyors oc clickbait than they are about the moral implications of misleading their fans.

The stars of Teen Mom are paid quite well, but clearly they feel the need to supplement their income with this sort of lame trickery.

But in the long run, the greatest victims of these scams might be the stars themselves.

Ratings for Teen Mom OG are at an all-time low, and while they’re certainly well-off, the castmates haven’t earned “never work again” money.

That means Maci anc company might be looking for real jobs in the very near future.

We’re sure most of them would prefer to remain in the media world, as opposed to seeking their first office job at age 30.

So this would be a very good time for all of them to look at the big picture, instead of taking every shady clickbait deal that comes along.

She has a clothing line ready to roll, and fans can’t wait to buy whatever she’s selling.

The reason she was able to pull off that transition is that she spent the past decade establishing cradibility and earning the trust of her fans.

And now, it looks more and more like Maci might learn the hard way that trust is easy to shatter — and very, very difficult to repair.