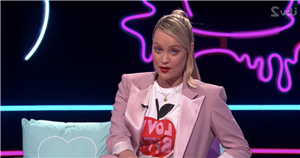 Laura Whitmore has explained the reasons why she hasn’t been back to the Love Island villa since her initial appearance at the first coupling up on the ITV2 show.

The Irish presenter, 36, gave fans of the sun-soaked reality show a delight as she opted to take part in an unexpected Q&A on her way to the studio for the latest Aftersun edition.

Posting a question box to her followers, the mum-of-one wrote: “En route to studio, shall we do a ‘ask me anything!’?”

When asked whether she’s going back to Mallorca soon though, she admitted it was a question she’s had on numerous occasions.

Answering yes, Laura then revealed that it’s been tougher to get back and forth to the Spanish island this year due to the constantly changing landscape with the coronavirus pandemic.

“Logistically it’s tougher than when I went out for the coupling up,” she began, talking to fans from the back of her taxi. “Balearic islands were in amber so when I did that I had to isolate for five days.

“I never knew that, I had to isolate for five days on my return.

“Then it went green and now it’s amber again,” the star continued with a chuckle,” sharing her frustration over the UK government’s travel traffic light system.

Laura assured fans that she’s had both her vaccinations, but despite now being fully protected it’s also difficult for her to jet off on a plane when she films Aftersun too.

“I also have to be in London every Sunday as part of my Love Island contract to host Aftersun,” the blonde beauty explained. “Which I love it’s so much fun.

“So that’s another logistical nightmare that we have to make sure that I’m always back in time.”

Despite the tricky situation the star joked that she wouldn’t mind just holing up with the islanders for the duration of the series.