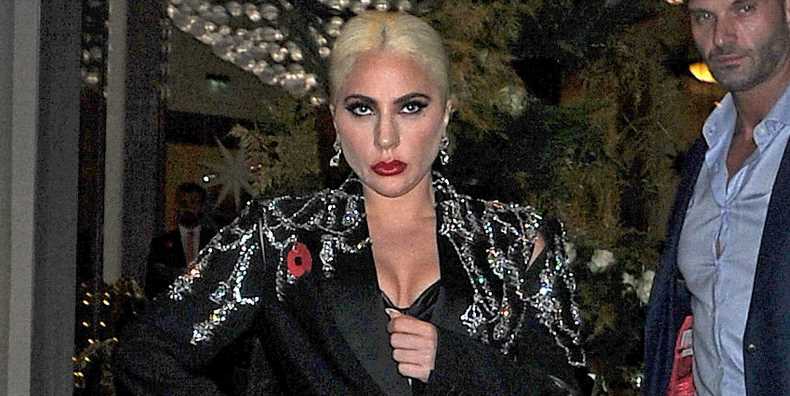 There was an instantly iconic purple look. A tan, Gucci logomania look. A white look that included a Birkin bag. And now, Lady Gaga's House of Gucci promo tour has an all-black ensemble to add to the list. The latest addition to this wardrobe of wardrobes comes courtesy of Gucci and while the monochromatic palette could be basic or somber, Gaga's look is as celebratory as it gets.

The outfit includes a tulle tutu and black blazer, but the most eye-catching details are undoubtedly the chandelier-inspired crystal swags that adorn everything from Gaga's padded shoulders to her sheer over-the-knee boots (which she wore over a pair of fishnets). Underneath her jacket, Gaga wore a shiny bustier and the slits at her shoulders and waist showed off the tiniest slivers of skin.

With so much shine, Gaga kept the other parts of her outfit more sedate, swapping the white Birkin for a sleek, stealthy black bag. She kept her blonde hair pulled back and matched her red lipstick to a tiny Remembrance Day poppy pin. In addition to the runway show-caliber number of outfits she's wearing, Gaga is also opening up about the process of filming House of Gucci, including going full-on method with her accent and embodying various animals to reflect the physicality behind her character, Patrizia Reggiani.

"In some techniques of acting, they call it 'using the animal,'" Gaga explained to the New York Times. "I began as a house cat, which has this kind of alluring quality but also can be a bit aloof," she added before saying that the cat became a fox. "Then, when [a Gucci lawyer] comes to my daughter's school to serve me divorce papers — meaning Maurizio didn't have the courage to do it himself — I transform from a fox into a panther."