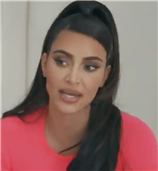 A tthe time, she was still married to Travis, so didn’t love that.

Except that Kim says that this totally isn’t true.

Kim’s public comment on the claim that she once boned family friend Travis Barker were prompted by a fan question.

“We’ve been friends for years,” she clarified, “and I’m so happy for him and Kourt.”

Kourtney and Travis have also been friends for years.

But very recently, that relationship has changed.

In recent months, a family friendship has turned into what looks like a very steamy romance.

She has been furiously accusing Kourtney of “breaking” her family.

To hear her tell it, Kourtney effectively ruined her life and those of her children.

But Shanna recently insinuated that Kourtney was not the only Kardashian whose drum set Travis has played upon.

She claimed to have “caught” Travis having an “affair” with Kim back when they were married.

“My family is broken because of this family,” Shanna recently griped.

“And now my kids and I are alienated from each other,” she claimed.

Shanna added that this was “because of another sister in the family, so yay for me!”

Shanna then spat a “thanks for destroying my family.”

So … if Kim and Travis never boned, where did this come from?

Well, it came from Travis’ old comments, admitted in a book of his.

Back in the day, he was hanging out with Paris Hilton when Kim and Paris were buddy-buddy.

Travis openly said that he liked hanging with Paris, but enjoys “curvy girls.”

He came right out and admitted how openly he enjoyed looking at Kim’s hourglass figure.

But that “admiration” was over a decade ago.

And no one other than Shanna and allegedly some of her friends seems to believe that anything came of it.

And Kourtney and Travis’ actual relationship is a very recent thing.

Shanna seems to have a lot of anger towards Kourtney, but let’s look at the facts.

Travis and Shanna married in 2004. Like, John Kerry was running for the Presidency during their wedding.

Just under two years later, after 22 months of marriage, Travis filed for divorce. In 2006.

Travis and Shanna had a very public airing of their strong emotions on social media.

And yes, that means that it was over Myspace, because Facebook at that time was exclusively for college students.

In early 2007, Travis and Shanna resolved to try to make it work, and were still married.

Travis and Shanna separated again, but were then seen kissing at the 2007 VMAs.

But before Valentine’s Day on 2008, their divorce had been finalized.

In early 2009, they tried rekindling things but quickly realized that it was not going to work.

In late 2014, Travis and Shanna made criminal threats towards each other during a heated argument.

As a result, police were called to their home, and they both ended up being arrested, but not charged.

By 2016, they were said to be on relatively good terms as co-parents.

As for their kids, by the way? They’re both teenagers.

Travis has also dated others since his divorce (which, again, was finalized in 2008).

(This was years before she was seen as what many have interpreted as a polycule with Tessa Thompson, Taika Waititi, and a mystery man)

It is absurd on its face to accuse any of the Kardashians of ruining or destroying this family.

There are people who have suffered, personally and financially, because of one or more Kardashians.

But it doesn’t look like Travis and Shanna’s relationship needed any outside interference. Shanna sounds bitter AF.