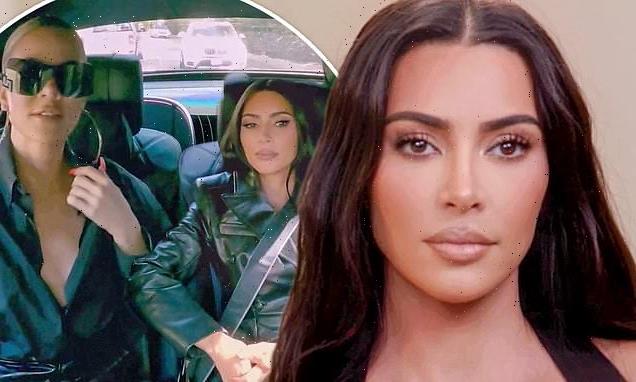 ‘Mortified’ Kim Kardashian admits regret over controversial ‘get your a** up and work’ advice to women in THAT Variety interview… as sister Khloe tells her: ‘No one sympathizes with you!’

Kim Kardashian is addressing the backlash she received after she was slammed for saying ‘nobody wants to work anymore’ in an interview published earlier this year.

In a teaser for The Kardashians, the billionaire makeup mogul reacts to the drama as she turns to sister Khloe Kardashian for help – who seems to remind Kim that she’ll little sympathy from her everyday fans.

‘I have the best advice for women in business,’ Kim, 41, had told Variety in March this year. ‘Get your f***ing ass up and work. It seems like nobody wants to work these days.’ 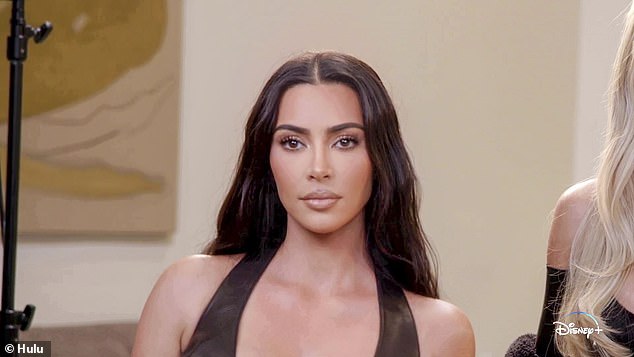 Mortified: Kim Kardashian appears to admit her regret over saying, ‘It seems like nobody wants to work these days’ in a now-infamous interview with Variety

The comments sparked a huge backlash for the star, and fans will now get to see how Kim handled the controversy in real time.

When asked about what she should do, Khloe deals Kim a reality check by reminding her: ‘No one sympathizes with you!’

‘I’m mortified, and I do understand why people were upset,’ Kim adds.

Khloe then appears to encourage Kim to pull through it, telling: ‘You got this. We’re built for this.’

The reality star was blasted as ‘tone deaf’ and out of touch following the publication of the interview – which was also shared as a video – prompting her to address the controversy in a recent sit-down with Good Morning America, in which she insisted that her comments were ‘taken out of context’ by Variety.

However, the Variety writer who asked Kim to share her ‘advice for women in business’ then furiously fired back at the reality star’s claims that her comments were ‘taken out of context’ by the publication.

Kim claimed to GMA’s Robin Roberts at the time that the question about her advice for women came after the interviewer – Variety’s Chief Correspondent Elizabeth Wagmeister – suggested that she was just ‘famous for being famous’, which she said made her entire ‘tone and attitude change’.

However Wagmeister has hit back at Kardashian on Twitter, insisting that the billionaire businesswoman was asked a ‘very direct question’ and that the ‘question about [her] being famous for being famous’ was actually posed after she offered up her advice to women in business.

‘It’s not what she claims,’ Wagmeister tweeted. ‘I just reviewed the raw footage. The question was very direct: “What would be your advice for women in business?” The question about being famous for being famous came after that question, actually.’ 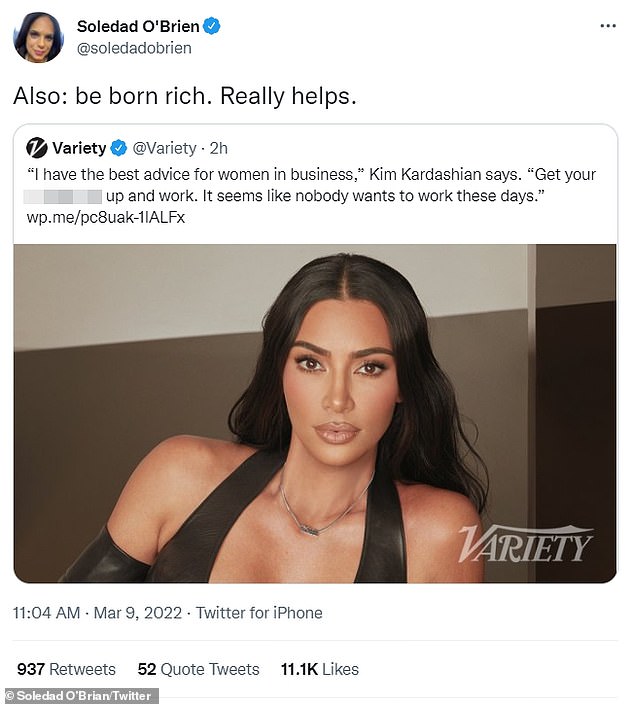 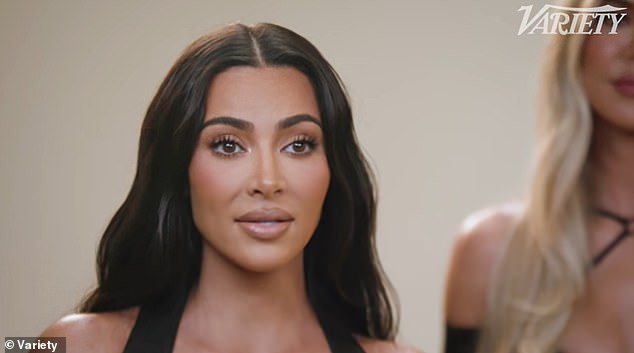 Ouch: The reality star was blasted as ‘tone deaf’ and out of touch following the publication of the interview

Meanwhile, The Kardashians clip also shared more drama from the famous family, including new mom Kylie opening up to her model sister Kendall Jenner as she admits to having cried for weeks after the birth of her son, who she shares with rapper Travis Scott.

‘I should be really happy right now, I just had this new baby,’ Kylie says, before adding: ‘But I cried non-stop for like three weeks.

Kylie gave birth to her second child on February 2nd this year, and originally revealed that his name was going to be Wolf, but later announced they had a change of heart.

She first opened up about her struggle in June this year, writing on Instagram: ‘I just want to say to my postpartum moms that postpartum has not been easy. It’s not been easy, it’s very hard. This experience for me, personally, has been a little harder than with my daughter.’ 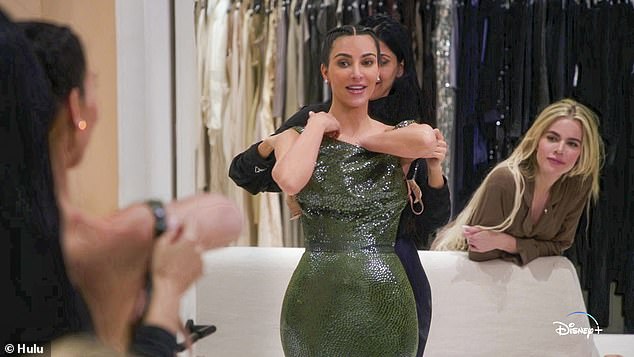 Met Gala prep: Fans will get to see behind-the-scenes moments of Kim getting ready for the ball… in Marilyn Monroe’s dresses 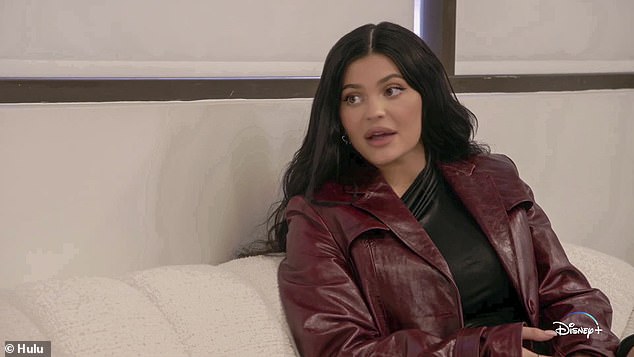 ‘I’ve cried non-stop for three weeks’: Kylie Jenner hints at post-partum struggle in The Kardashian season two teaser that was unveiled to fans on Monday 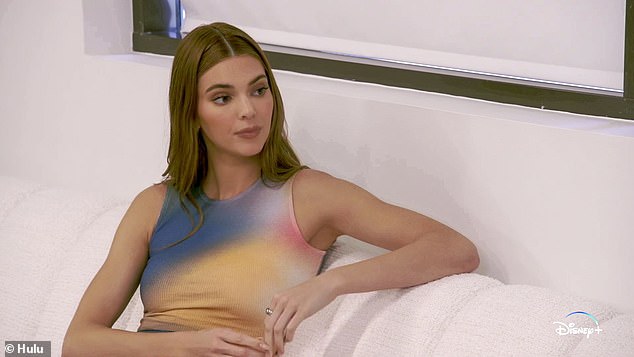 Shoulder to cry on: Kendall Jenner is seen listening to Kylie as she opens up about her struggles 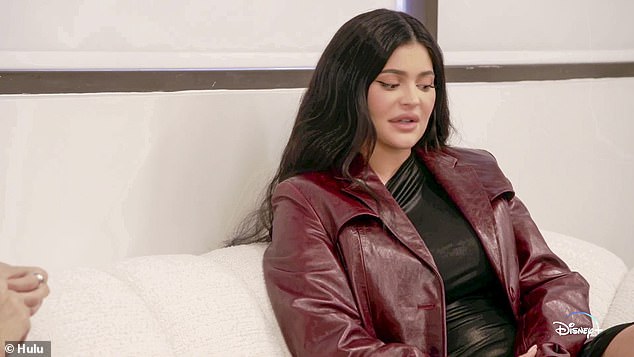 Confessions: Alluding to post-partum struggle, new mom Kylie is seen in the teaser opening up to her model sister Kendall

Meanwhile, in another part of the teaser, momager Kris, 66, gets tearful as it’s revealed that she is going into hospital to undergo a procedure though it is not clear what for.

‘Are you doing the surgery?’ Kim is heard asking her mother Kris, who is in tears at home.

The tense teaser then cuts to a confessional with Kris who is wiping away tears as she tells the camera: ‘I don’t want to tell my kids I’m scared. 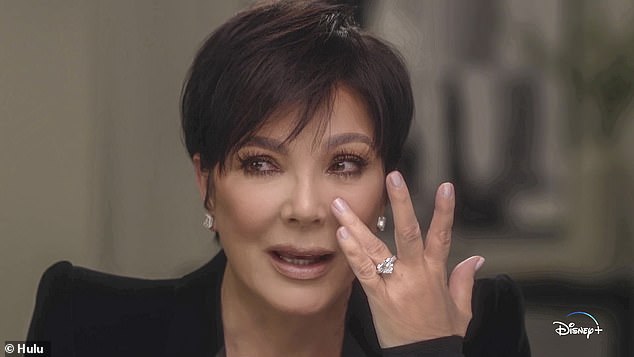 Tears: Momager Kris Jenner gets tearful talking about having a mystery procedure 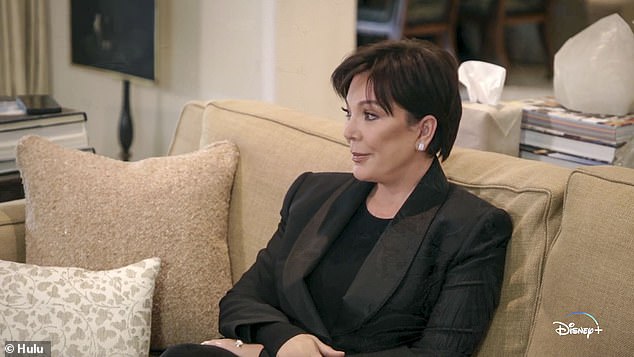 The tense teaser then cuts to a confessional with Kris who is wiping away tears as she tells the camera: ‘I don’t want to tell my kids I’m scared 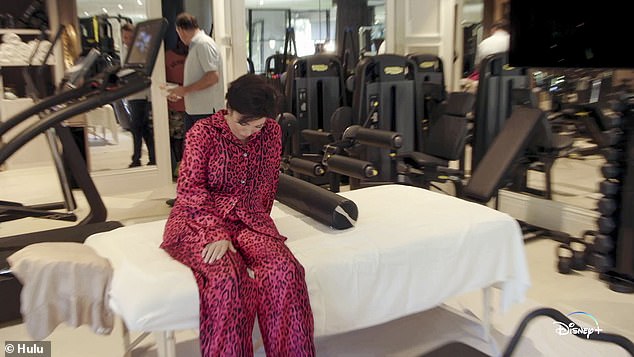 Health issues: Kris looks to be in pain is she seen on a massage table 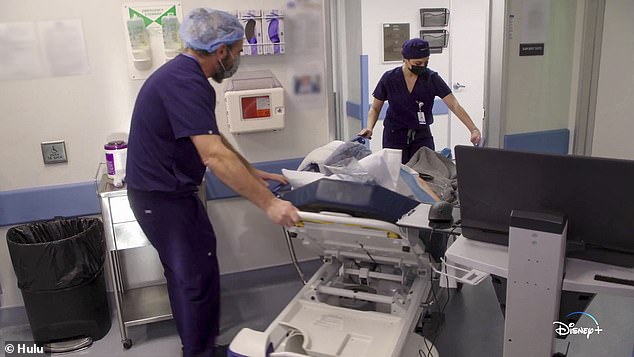 Mystery: We then see what appears to be Kris lying on a gurney in hospital

Despite having been filmed for it, there is no sight of Kim Kardashian’s now ex-boyfriend Pete Davidson, as she is seen trying on Marilyn Monroe’s dresses for the Met Gala.

‘I’m the Marilyn and the Jackie honey,’ Kim says as she gets ready behind-the-scenes.

Pete, 28, was pictured at the premiere of the show in Hollywood earlier this year being filmed by the reality show camera crew, though it is unclear how much he will feature in the series now the relationship has ended. 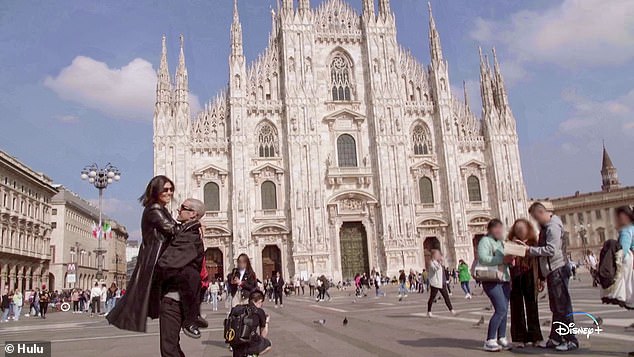 Kravis mania: Fans will also get to relive the whirlwind romance of Kourtney Kardashian and Travis Barker in the days leading up to their three weddings 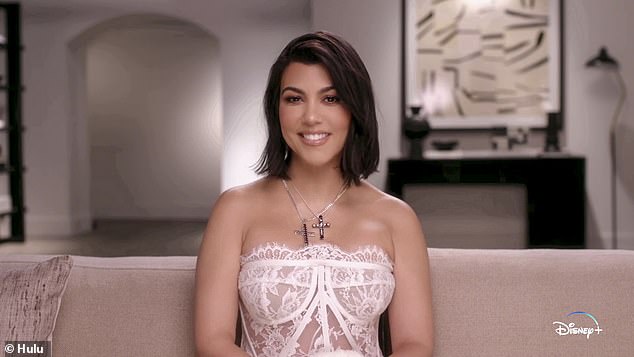 Happy: Kourtney looks like the cat that got the cream as she talks about her big day 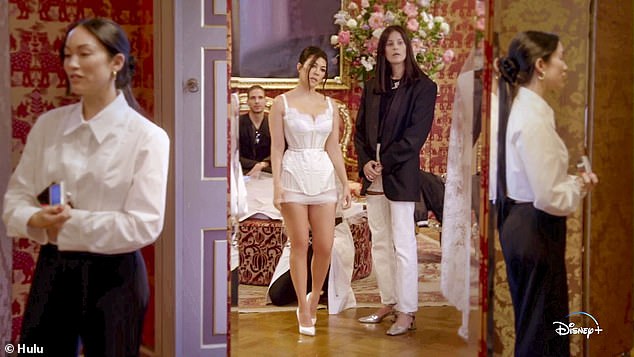 Behind the scenes: Kourtney tries on her wedding look 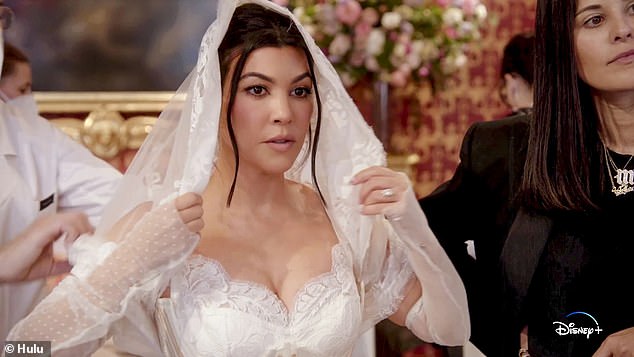 Here comes the bride: The mother-of-three looks stunning in a bridal outfit

In one scene, Kim asks her sister Khloe if she has seen the backlash, and gets a dose of reality in the process.

‘No one sympathizes with you!’ Khloe is heard telling Kim, who admits she is ‘mortified’ by the drama.

‘I’m mortified, and I do understand why people were upset,’ Kim adds.

Khloe then appears to encourage Kim to pull through it, telling: ‘You got this. We’re built for this.’

The trailer starts with Kim doing a SKIMS photoshoot and her telling daughter North, who is presumably unimpressed, how ‘iconic,’ the shoot is. 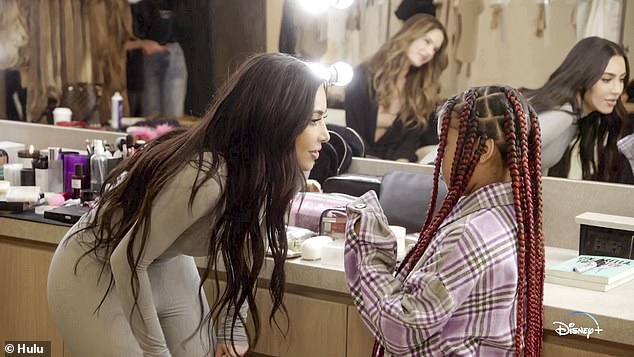 Not interested: Kim is seeing telling daughter North she has ‘no idea’ how ‘iconic’ her latest photoshoot for SKIMS is 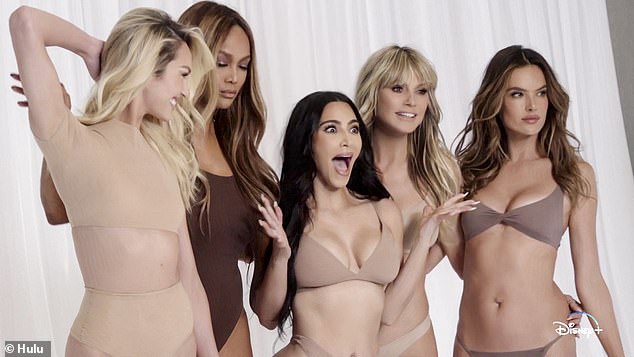 Khloe is then seen in a confessional saying that season two is ‘going to be insanity’ as more scenes from the show are teased.

Kendall tells the camera that she is ‘becoming her own woman’ and that she wants to be her own boss, as we seen her pose with her 818 tequila brand.

‘Going through what I went through was incredibly hard,’ Khloe says in another scene, no doubt referring to her drama with baby daddy Tristan Thompson.

‘I just feel that I’m a fish in a fish bowl,’ Khloe adds.

Interestingly, Kim – who is now single – says the new show has been a ‘season of independence’ adding: ‘I really feel that I found my personal confidence.’ 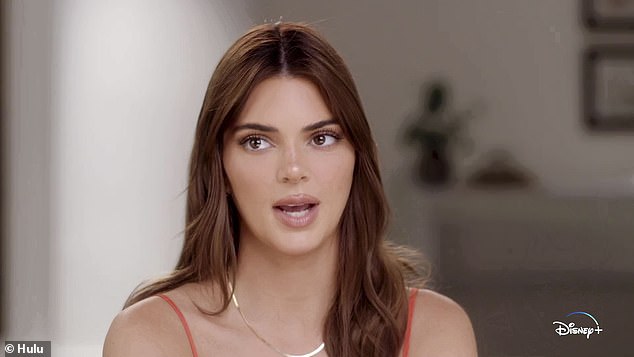 Sister rivalry: Kendall hints at some new beef with Kylie in the promo 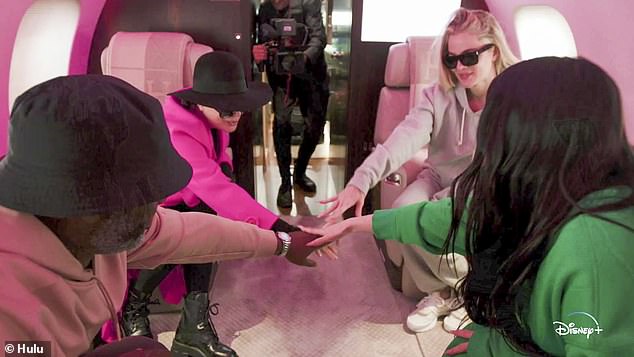 In it to win it: Kris, Corey Gamble, Khloe and Kylie as seen putting their hands together on a private jet

Kourtney Kardashian also appears, as she gives fans a glimpse of her trying on her wedding dress for the first time, ahead of her nuptials to Travis Barker.

Hilariously, we then see Kris Jenner slip up as she says, ‘I’m just so excited for Khloe and Travis,’ getting her daughter’s name wrong.

‘Whatever… it starts with a K,’ Kris quips.

There is drama teased between Kylie and Kendall, as Kylie says she is ‘really mad’ at her over a cancelled event.

‘She always seems to get out of things and I have to take over,’ Kendall fires back in a confessional. 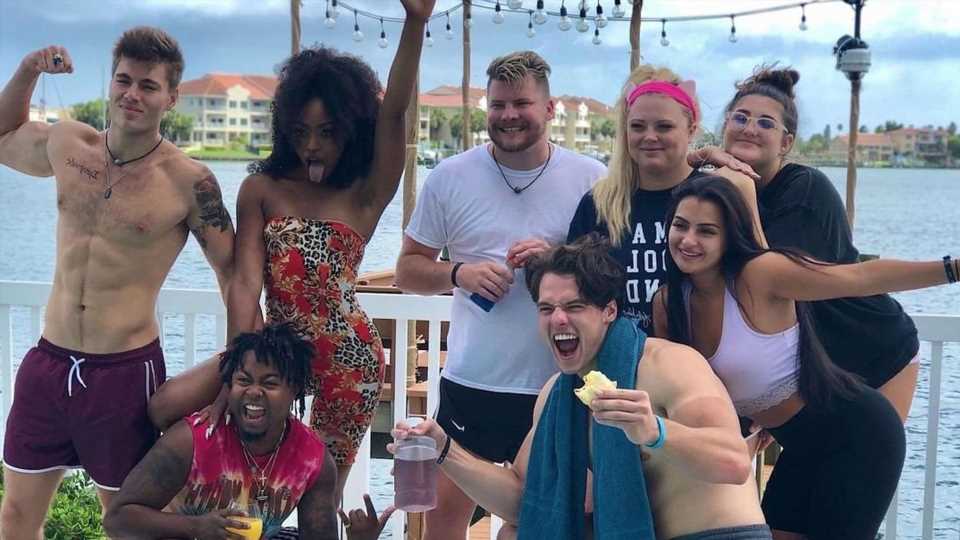 Previous post Floribama Shore cast: Who's in the show? | The Sun 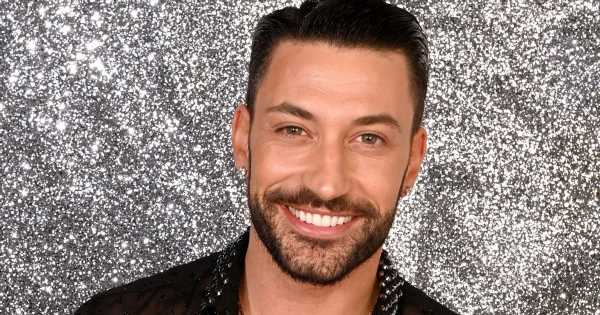