Kevin Hart is best-known for his comedic skills that keep audiences laughing, but the comedian isn’t afraid of turning the jokes on himself now and then.

Whether he’s sharing about embarrassing moments – like that time he spilled pineapple juice on Beyonce — or reliving his childhood for his fans to see, Hart is committed to making the best out of life and bringing us all an enjoyable perspective.

Hart went on Jimmy Kimmel Live and opened up about his basketball dreams and the lengths he went to try to make them come true. In the process, he reveals some pretty hilarious moments from his past. 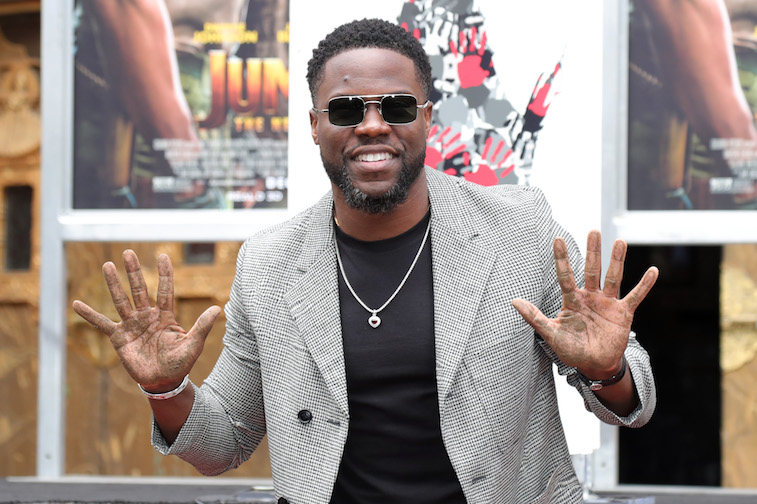 Kimmel asks Hart “how far” he went in basketball, and Hart starts by saying that he has to be honest because “you can find footage,” so there’s no use lying about it. He did, in fact, play four years of high school basketball, but it was no easy feat.

Hart’s high school was two hours from his house via public transportation, and basketball tryouts were at 6am. His mom didn’t want him leaving the house at 4 a.m. because she didn’t think it was safe.

Hart set every clock in his house forward two hours to trick his mom into thinking he was leaving on time. He made it to tryouts and then went to class. As he was sitting in class doing his work, he glanced up and saw his mother waiting for him outside of his classroom.

Angry that she’d gotten to work two hours early, Hart said “she beat me all the way home. Every bus we got on, she hit me.” Hart said it was all worth it because he made the team.

Morning work in my @fableticsmen ….We don’t take days off….everyday is a workday in some way shape or form….always improving….always growing….Put a “F” on your chest fellas!!!!!! #fabletics

At only 5 feet 4 inches tall, Hart is an unlikely candidate for basketball success in adulthood. However, the comedian is dedicated to his fitness and has a work ethic that many consider uniquely impressive. He dedicated himself to becoming as fit as he could, and fans have gotten to see the fruits of that labor.

He became the first comedian to partner with a major athletic shoe brand, snagging himself a multi-million dollar Nike deal. He also beat former NFL player Tiki Barber by running the New York City Marathon in 4 hours, 5 minutes, and 6 seconds.

Another way that the star demonstrated his commitment to fitness was through his recovery from a 2019 car accident that left him in crippling pain. As he attempted to get back on his feet after the crash, Hart was struggling, but he didn’t want anyone in the hospital to know it.

“I lied in the hospital because I didn’t want them to know that I was having pain, because I thought that they were gonna stop me from letting me continue to try my walks,” Hart explained.

Basketball may not be Kevin Hart’s sport

RELATED: What Dave Chappelle Did That Made Him Kevin Hart’s Favorite Comedian

While Hart’s definitely dedicated himself to athleticism and hard work, basketball just may not be his sport. He has had the opportunity to relive his glory days from being on the high school varsity team through participation in the NBA All-Star games.

He definitely gets an A in entertainment but doesn’t often deliver impressive basketball skills.

According to Insider, Hart recently got to watch a clip of his old basketball days and had to crack up at just how bad he was. As he watched his younger self turn over the ball again and again, he commented, “Alright. Well, I just want to say I get why my coach didn’t let me play that much … I think I’ve got eight turnovers right now.”

The star took it all in stride and had no problem laughing at himself.