Katie Price has been left feeling ‘sore and bruised’ after suffering two accidents on her horse.

The former glamour model is known for her deep love of horses but even she can’t avoid quite literally falling on the wrong side of her stallions.

On Monday, Katie, 44, took one of her beloved horses out for a ride but it ended in disaster when she was thrown to the ground twice.

In an Instagram video, the Mucky Mansion star revealed her muddied riding outfit from her very own KP Equestrian clothing brand as well as bruises on her arm from the fall.

She explained to her followers: ‘As much as I’m a very experienced horse rider tonight I fell off twice 1st time horse spooked and bucked, 2nd time is when horse refused to jump and then bucked so high then ran off me and started to buckaroo.

‘Thankfully I had a body protector and hat on but feeling sore and bruised.’ 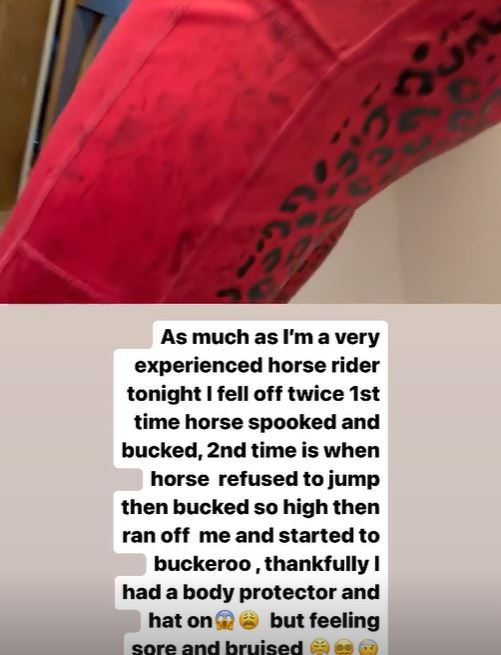 It came just hours after Katie and fiance Carl Woods were seen together promoting her equestrian clothing line.

The couple were spotted at the Autumn Show and International horse trials in Haywards Heath on Sunday holding hands as they walked through the event and accompanied by Katie’s protection dog Blade.

It was a working event for Katie as she set up a pop-up stand for her clothing brand and was seen happily signing autographs for fans.

After a hard day’s work, Katie and Carl, 33, queued up at a bar to grab a refreshing beverage.

The couple have been putting on a united front in recent weeks after being plagued by persistent split rumours.

Earlier this month, they put on all the PDA at the National Diversity Awards with Carl planting a kiss on Katie’s cheek and posing for photos with her eldest son Harvey.

Reports had mounted that Katie and Carl had ended their two-year relationship after the star reportedly described herself as ‘single’, but both repeatedly denied the claims.