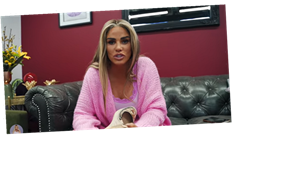 She has been slowly but surely recovering from breaking her feet, and now Katie Price has gone one stop further and worn high heels for the first time.

The former glamour model, who shared a picture of Princess with Kerry Katona's daughter Heidi, showed off the latest development in her newest YouTube video.

In the clip, the 42 year old is sat in a dressing room ahead of her appearance on Channel 4's Steph's Packed Lunch.

The mum-of-five is wearing a pink cardigan and pink leggings as she proceeds to try on a pair of Gucci wedges.

She said: "Today is the actual first day that I'm actually going to wear heels since my accident.

"So I don't know what they're like to walk in because these were summer shoes, can I still walk in them?"

Katie then proceeded to get up and attempt to walk around in the heels, before saying: "Yes I actually f****** can.

"I love it, they're actually so comfortable. We need to do a picture of that and say first time in heels."

The reality star fell off a wall while in holiday in Turkey in August 2020, and broke her feet which resulted in an eight hour operation to rebuild them.

Speaking to The Sun in February, she expressed: "I will never be the same, I've had to accept that.

"The accident has changed my life and it's only just sunk in if I'm honest.

"I'm lucky to be alive and to be able to walk a short distance, but it gets frustrating. If I want to go on a long family walk, I have to take a wheelchair.

"I've been given two sets of painkillers but I can't take them because I'm scared of becoming addicted, so I'm just in constant pain," Katie revealed.

As well as Katie's accident, her boyfriend Carl Woods, who was comforted by her son Harvey, recently broke three bones in his hand after dropping a heavy dumbbell.

A source told The Sun: "“This is the worst possible situation for the pair – they're now both struggling with severe injuries.

"Carl has broken three bones in his hand and has had to have his whole arm put into plaster and is now facing an operation to get it fixed."