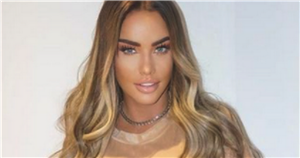 Katie Price has blasted Ulrika Jonsson after she was branded "fame hungry" by the TV personality.

Former glamour model Katie, 43, said 53 year old Ulrika looked "haggard" as she hit back at her comments over her cosmetic surgery in a column.

Katie posted a photo of Ulrika on her Instagram story and warned: "@UlrikaJonssonOfficial before judging and having a swipe at me take a look at your self and your career, maybe you need to take a leaf out of my book as you look haggard my darling".

The mum-of-five's scathing swipe comes after Ulrika said Katie was "starving" for fame in her latest column with The Sun.

Ulrika claimed how she once "admired" Katie at the start of her career. She then added: "But now she has, once again, exhibited and paraded publicly her latest plastic surgery, and I can’t deny I am quite horrified by the images. As a mum, I also wonder what her children must feel."

She then discussed Katie's reported plans to film a documentary to share her knowledge of plastic surgery after several procedures.

Ulrika then added of Katie, who recently finalised her divorce from Kieran Hayler: "This girl wasn’t fame-hungry, she was starving, and she carved out a huge career for herself. As a bystander, it has always felt to me as if she’s constantly in pursuit of something."

Former model Ulrika underwent a breast reduction in 2009, but insisted her "goals" with her surgery were different to that of Katie's.

"My operation had nothing to do with pursuit of eternal youth. I felt, wrongly or rightly, that it was corrective surgery. I’d been blighted by two unnaturally large bazookas," she said.

Ulrika continued: "It may be disingenuous and hypocritical of me to view my surgery as different to Katie’s but our goals were different and, as far as I’m concerned, that’s me done.

"My concern is that cosmetic surgery can become a relentless quest for youth, adjustment and modification.

"But it’s also one with potentially serious complications. You don’t have to be a psychologist to question what lies behind the need for these procedures."

Katie underwent her latest round of surgery in Turkey last month. She is understood to have gone under the knife for a full-body liposuction, a Brazilian bum lift and lip and eye lifts, adding up to more than £12,000.