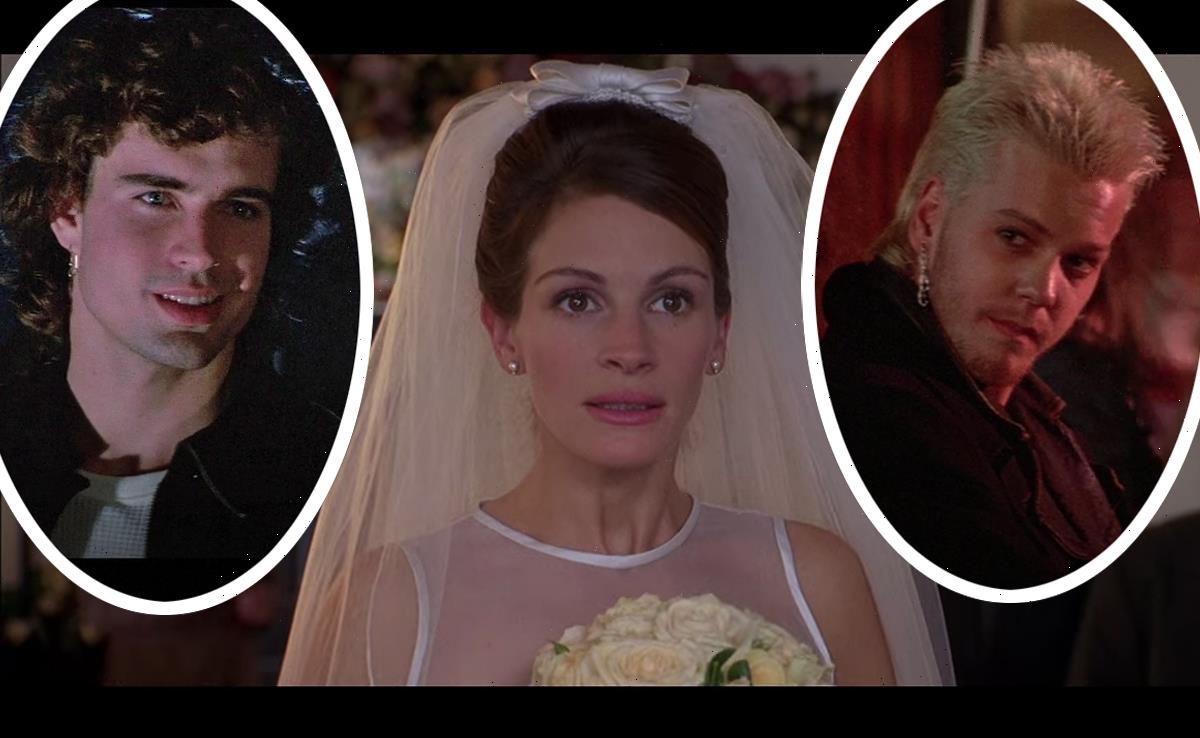 In case you were unaware, one of the biggest celeb scandals from WAY back in the day was the way Kiefer Sutherland and Julia Roberts‘ relationship ended.

The movie stars met and fell in love on the set of the 1990 thriller Flatliners, despite the fact he was going through a divorce and she had been engaged to future American Horror Story star Dylan McDermott at the time. Their relationship soon became the talk of Tinseltown. If you’ve ever seen her Best Supporting Actress Oscar win for Steel Magnolias, you know she thanked her “beautiful blue-eyed, green-eyed best friend, who gives me everything” — that clearly referred to Kiefer, who famously has one eye of each color.

The relationship was tabloid fodder basically from the start as People referred to them as “Hollywood’s reigning couple.” And there was gossip to talk about, too. There was a whole cheating scandal and a brief separation — in which a go-go dancer named “Raven” claimed Kiefer cheated with her and badmouthed Julia, saying she had turned into an “insecure ice princess” since the success of Pretty Woman had turned her into a megastar.

But the couple got back together and even got engaged… and they very nearly got married. The story has been told a little differently over the years, but either three days beforehand or the actual day of her wedding, Julia called it all off and ran away with…

Yes, Jason Patric, his BFF and The Lost Boys co-star, was spotted with Julia ON THE DAY OF THEIR WEDDING on a plane to Ireland. Eyewitnesses at the time claimed they were all over each other, “practically making love” on the plane. Kiefer is rumored to have been overheard saying:

“When I get hold of Jason I am going to tear him limb from limb. That snake pretended to be my best friend and all the time he was really after my girl.”

Man, that dialogue is beneath Kiefer Sutherland… To rub salt in the wound, a bombshell People report at the time claimed Julia and Jason had begun their affair with a lunch of turkey burgers — and the four-tier wedding cake she left behind for Kiefer was also in the shape of a turkey. Damn. All that and she still made a movie called Runaway Bride.

Julia and Jason’s relationship also didn’t last either, btw. The two broke up in 1992, and the following year Julia married country singer Lyle Lovett (whom she divorced in 1995).

Anyway, that’s the story we’ve been hearing for 30 years. But now for the first time ever we have two points of the love triangle speaking about the incident together — in the same room even!

Kiefer and Jason were on this week’s episode of Inside Of You, Michael Rosenbaum‘s fantastic podcast in which he gets very, very personal with fellow actors and filmmakers. It’s over an hour of great name-dropping and Hollywood stories, but surprisingly it finishes big with the two actors talking, together for the first time ever, about the scandalous incident that killed their friendship for two decades.

It started with Michael asking Jason where he and Julia had jetted off to, to which the Rush star responded:

“That was all the press, I mean the fact was…”

Oh yeah, someone remembers it pretty well. Michael went on to ask what he really wanted to know, which was if they had ever talked about it.

Jason started the story of their reconciliation, revealing the friends finally reunited in the late 2000s, saying:

To which Jason shot back:

Jason began by saying he didn’t want to spill intimate details about Julia herself because she wasn’t there to defend herself — but he did think the whole Runaway Bride aspect was overblown:

“Look, the thing is, she’s not here, right in this room. So I feel strange talking about what she told me or what she told Kiefer because she can speak for herself. But the large stuff about the press and being invited to the wedding and taking off with the bride — that’s all bulls**t. Kiefer’s specific relationship, and what they were at the time, that’s theirs.”

In a 2016 interview, Kiefer did say about his former fiancée:

“I think she had courage. It wasn’t what she wanted to do in the end. And I think it took a lot of courage, in amongst all of that other stuff, to be able to say, ‘I can’t do this.’”

In that same interview, with Jess Cagle, he also brought up her rising fame as a major stress factor, explaining:

“We were both young, and we were both very much in love, we had decided that we wanted to get married, but then this other thing kind of took over. She was arguably the most famous woman in the world, and this wedding that was supposed to be something between the two of us, became something so big.”

But back to how the friends reunited, Kiefer explained they finally talked after he had been asked about it in an interview:

“Well, I was making a joke about the country song. Somebody had asked me a question about Jason, and I said, ‘Well, you know, I lost my pickup and my dog and my best friend, and I miss my best friend.’ You know?”

Awww. In that actual 2006 Rolling Stone article, when he was asked whether he had forgiven Jason, he said:

“It’s not a matter of that. We were friends, and I’m surprised that I never got a call from him saying I’ve fallen in love with da-da-da. Instead, I found out from a stranger.”

That doesn’t sound too over it.

However, he makes it sound now, today, on the podcast, very much like he had long since forgiven both of them by that time, as he recalled:

“That was a difficult time for me, and I think it was an uncomfortable time for both of them. But look, honestly, the truth where I’m coming from: you fall in love, you fall in love. There’s nothing you can do about that. She’s an extraordinary person, and he is too. Timing is what it is, and everybody moves on from that.”

Wow, that’s such a mature take! Of course, it was decades in the past, and time heals all wounds. Well, that and celebrity role models. He added:

“I mean, George Harrison and Eric Clapton were best friends ’til the bitter end, you know?”

That’s a reference to the rock legends’ infamous love triangle with photographer Pattie Boyd. In that case, Pattie had been married to Harrison for nearly a decade when Clapton began pursuing his best friend’s wife FOR YEARS — even writing the song Layla about her — until she finally agreed to leave her marriage for him. Then they got married, and somehow the Beatle still remained friends with both of them! Yeesh.

Jason, also knowing the story pretty well, made clear after the reference that the situation with Julia wasn’t nearly as scandalous as Harrison and Clapton, butting in:

And Kiefer agreed, picking up on his friend’s thought and finishing it:

“It wasn’t that, by the way. But I figure if they can deal with what they dealt with, we certainly can.”

The two became such good friends again that by 2011 they were co-starring in a revival of the Tony-winning play That Championship Season, which Jason’s father, The Exorcist star Jason Miller, had written. And it didn’t take long to become BFFs again either.

Patric explained from his side that when they finally did speak again, there wasn’t even any big, dramatic fight:

“When I saw him again, it was a few words of this and that, but it was more of a laugh and a toast.”

See, that’s really great. It sounds like the grudge had died so long ago they didn’t even have to hash it out. Jason added about Kiefer AND Julia:

“I’ve said in the press before that they’ve both been subsequently married since a couple times, and I think they’re both very happy in their lives. And what lasted after all that was me and Kiefer as 35-year buddies.”

It’s true, Julia seems to finally have found happiness; she’s been married to photographer Danny Moder since 2002. Kiefer has been married again as well, and divorced again. So it’s all ancient history.

But, as Kiefer joked:

“I never got the truck back.”

Ch-ch-check out the full interview — it’s well worth the listen for fans of The Lost Boys especially — or jump ahead to the love triangle talk at about the 1 hour, 16 minute mark (below):